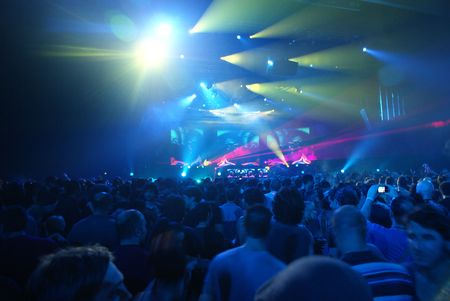 The lines at JFK are out of control tonight, so I'll try to pass the time by giving a quick rundown of my top 10 musical experiences from 2011 - both in NYC and elsewhere. I'm doing this without the benefit of being able to look over this year's posts, so leave me a comment if I forgot something.

In no particular order:

1. The National at the Beacon Theater: I've seen these guys on multiple festival stages over the past couple of years, but seeing them here - in the second row, no less - was a reminder of how powerful and moving they are up close.

2. Sonar Barcelona: At first, I wasn't sure it made sense to head back to Barcelona just one year after my first visit for Primavera. But, then I saw the blend of experimental music with partying at Sonar By Day. And then, I saw Steve Reich's Music for 18 Musicians, surrounded by locals hearing it for the first time. And then, I saw Aphex Twin set the massive SonarClub on fire. And then...

3. Fete de la Musique in Salon de Provence: Make Music New York (and now Make Music Winter) are awesome additions to the NYC music calendar, but France started it all 30 years ago with this annual celebration on the Summer Solstice. I'll never forget the wild scene in Salon, with tens of thousands of people packing the streets til the wee hours - on a Tuesday.

4. Dan Deacon with the Kitchener-Waterloo Symphony: The sign on the door said it all: "Warning: Loud Music." With a program curated by Dan that included everything from Moondog to Dan's own Cageian chance piece, this was the sort of crossover-fun show one might expect to see in NYC these days. But, it actually took place north of the border, thanks to the Kitchener-Waterloo Symphony and their brave, broad minded music director, Edwin Outwater. Don't be surprised if you see the California native land a big-time gig one of these days.

5. Ecstatic Music Festival: Judd and his NewAm crew held court in Merkin Concert Hall for 2 months, putting together a crazily ambitious series of programs that challenged indie and new music artists to not just share bills but collaborate on new ideas. The results were mixed, but the idea was a solid one, bringing downtown crowds uptown and giving Merkin subscribers a much-needed kick in the pants. Round 2 is coming up in February.

6. Fun Fun Fun Fest in Austin: Who in their right mind would put Slayer on the same bill as Tune-yards, or Ted Leo next to Austra? This DIY festival - led by the tireless Graham Williams - has it all: indie rock, hip hop, electronic music, even comedy. And, now that they've abandoned postage stamp Waterloo Park for Auditorium Shores, the sky's the limit.

7. The Cleveland Orchestra performing Bruckner and Adams: When Franz Welser-Most told John Adams he wanted to program four concerts, pairing Adams' music with Bruckner's 5th, 7th, 8th and 9th symphonies, Adams told him he was out of his mind. In fact, Bruckner's repeating motifs and soaring crescendos proved the perfect complement to Adams' post-minimalist structures. Welser-Most, who was born in the same part of Austria as Bruckner, took a huge chance with this one, and it paid off huge. Brilliant and thrilling programming

8. London Symphony Orchestra and Chorus performing Beethoven and Britten: As great as it was seeing Colin Davis conduct Beethoven's Missa Solemnis - his greatest and most challenging masterpiece - Gianandrea Noseda stole the show with the most astonishing performance of Britten's War Reqiuem I or most others have ever seen. Ian Bostridge and Simon Keenlyside were ferocious in the soloist roles; the chorus who sang with such intense passion and conviction, you could just feel the music in their bones.

9. Newport Jazz Festival: Sure, it was a soggy mess by Sunday, but it was still a huge thrill to see everyone from Esperanza Spalding to Wynton Marsalis at historic Fort Adams for the first time. And George Wein, 86, still makes things run like clockwork.

10. Stockhausen's Cosmic Pulses at Issue Project Room: Give Joe Drew props: not everyone has the energy - or persistence - to bring the late electronic master's music stateside. And, while Issue lacked the proper spatial dimensions of Rome's Sinopoli Hall - where I heard Stockhausen "project" the world premiere in 2007 - you couldn't have found a more enthusiastic, focused audience. If my sources are correct, "Cosmic Pulses" is destined for much larger NYC stages in the near future.

Wow, its been a fun year. And, its not over yet: this time tomorrow, I'll be in Vienna for a week's holiday, promising numerous musical highlights of its own. Check back for updates, as well as dispatches from the rest of the FoM crew back in NYC.

Listen for Life Benefit at Zankel Hall on January 8th 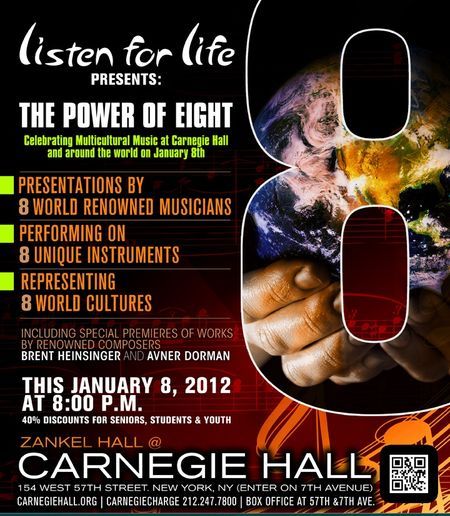 The organization Listen for Life, which seeks to "restore music as a unifying force and a channel of positive communication," will present a benefit concert in Zankel Hall on Sunday, January 8 at 8pm. The concert features eight musicians from eight different cultures around the world performing on eight unique instruments, including brand new works by renowned composers Brent Heisinger and Avner Dorman. Grammy-nominated pianist and founder of Listen for Life, Donna Stoering explains, “This is a New Year's family event to celebrate the power of music."

Among the performers is Vanessa Vo of Vietnam, who plays the dan Tranh (16-string zither) and other traditional instruments. The Emmy and Oscar-nominated musician will share the stage with musicians from Hawaii, the Meditteranean and Western Europe, performing selections on Hawaiian slack guitar, piano, percussion, the oud, and viola. 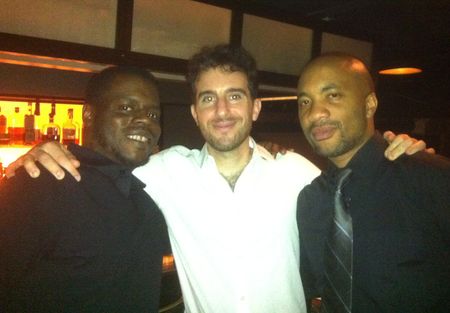 "Energetic" is always the verb that comes to my mind when I think of Aaron Goldberg’s piano playing.  Listening to the man work his frenzied magic on the Steinway at the Jazz Standard on Friday night was no exception.  Goldberg's refreshingly melodic outbursts were complemented by the richly intense bass of Reuben Rogers and the powerful rhythms of drummer Gregory Hutchinson.

Between songs, Goldberg told delightfully witty tales depicting the journey each piece took to completion. He spoke of how his new CD Bienestan is named for "an imaginary country formed in the recesses of our minds where only good things happen." As it happens, I met a gentleman who was visiting the United States from Austria. He had already seen the trio perform two nights prior to this show, and was drawn to return for a third time.

A Boston native, Goldberg had his mellow moments:  Manhã de Carnaval is subdued and mysterious at first, but then transformed into a fiery storm that engulfed the audience.  My only complaint was that when this melodious magic carpet ride was over, I had to take the very real subway back home. 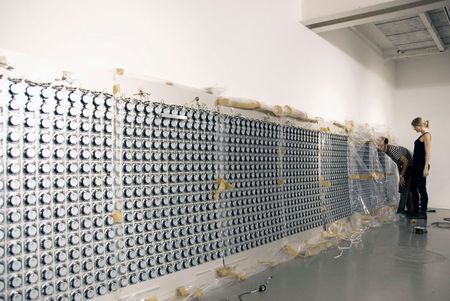 Apparently, 'tis the season to get engaged: tonight at my parents' house in New Jersey, my cousin Kevin and his longtime girlfriend, Valerie, just agreed to tie the knot sometime next year. As excited as I am for them, I could hardly contain my excitement to also learn tonight that my brilliant and beautiful friends Tristan Perich and Lesley Flanigan are newly engaged. Music has seldom known such a fruitful and forward-thinking partnership, and I can't wait to see where they go from here. Congrats to all.