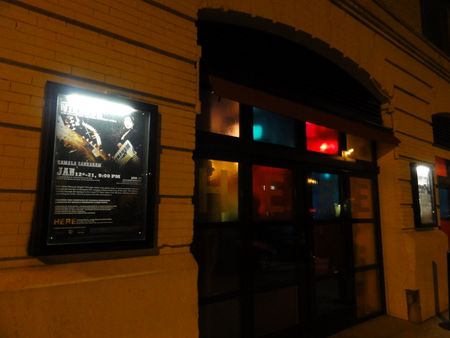 It isn't easy to get a new opera off the ground these days. First, someone needs to write a libretto. Then, someone needs to write the music. Then comes the long, painstaking process of figuring out what works musically and dramatically, and what doesn't. And, then, after all of that, you need to find someone who's willing to stage it. Just ask David T. Little or Missy Mazzoli, whose "Dog Days" and "Songs From the Uproar," respectively, have been in various stages of workshop for the past three years. ("Songs" is finally having it's world premiere at The Kitchen next month, staged by the intrepid Beth Morrison Projects; "Dog Days" will receive its premiere at Montclair State University in September.)
Three years ago, composer/performer Kamala Sankaram was invited to join HERE's Artist Residency Program (better known as HARP), where she was given the resources and time necessary to develop her own operatic project, Miranda: a sort-of postmodern murder mystery co-written by Rob Reese, who also served as director. Excerpts from Miranda were previously shown during HERE's annual Culturemart Festival in 2010 and 2011; throughout the process, artists were given hands-on training with everything from marketing and production planning, to budgeting and grant writing. 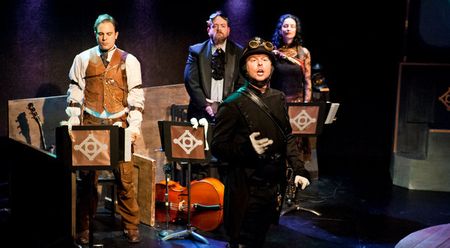 (NY Times)
Miranda finally received it's first full production two weeks ago on HERE's mainstage (I saw the performance on Friday, 1/20.) Crafted in the Victorian-futurist style known as Steampunk, the one-act opera concerns the murder and subsequent trial of diet-pill heriess Miranda Wright (performed by Sankaram.) A bailiff (Jerry Miller) served as an engaging and enthusiastic M.C., instructing the audience - the de facto jury of the made-for-TV trial - on rules and protocol. A metallic-voiced computer projection named D.A.V.E. (short for "Differential Autonomous Verification Engine," sung by countertenor Eric Brenner) served as virtual judge. Among the accused were Miranda's father, Izzy (Pat Muchmore, best known as the founder of Anti-Social Music), Miranda's mother, Anjana Challapattee Wright (Rima Fand) and her fiancee, Cor Prater (Drew Fleming). The singers were joined by reed players Ed Rosenberg and Jeff Hudgins.
The music was catchy, combining rock and electronica with hints of jazz, funk, and classical. Sankaram led the way with her penetrating coloratura soprano, sounding like a Mozart heroine while simultaneously playing the accordion. Muchmore did the same on countertenor and cello, while Fleming plucked at an electric guitar and Fand played violin. One wonders if such double-duty will become more and more prevalent among performers as opera continues to go the way of grassroots.
In the end, Miranda's mother is found guilty (in spite of the audience's confused verdict), and Miranda and Cor share a heartrending final duet that moves from vocal to purely instrumental. By that point, I couldn't even imagine leaving the transition to a pit band. 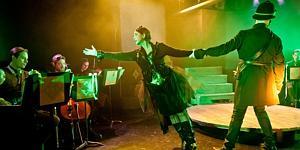 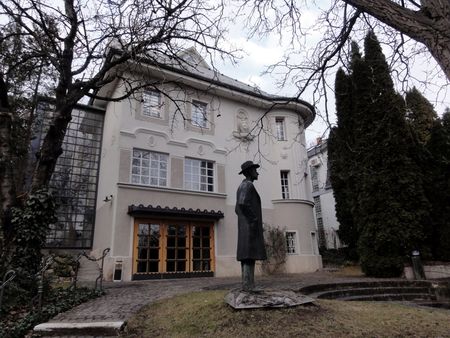 When I visited Budapest earlier this month, the last stop I made on my way back to Vienna was Béla Bartók's residence, high up in the Buda hills. The house, which the great composer bought in 1932, is a modest three-story dwelling, overlooking a sloping front garden with wide-ranging views to the north. Much of the home's original furnishings have been preserved, including Bartók's carved desk, his Bösendorfer piano, and the phonograph on which he listened to his own recordings of Hungarian folk songs. (You can see all of my pictures here.)

Bartók moved to this house primarily to escape the noise and bustle of Pest, where he lived for many years while teaching at the Liszt Academy of Music. The quiet country setting certainly had a positive impact on his output: among the works Bartók wrote here were the fifth and sixth string quartets (1934, 1939), Music for Strings, Percussion, and Celesta (1936), the Sonata for Two Pianos and Percussion (1937), Contrasts for clarinet, violin, and piano (1938) and Divertimento (1939).

So, it's no surprise that when Bartók left Budapest and settled here in New York after the Nazis occupied Hungary in 1940, the move initially had a negative impact on his creativity and general well-being. He and his wife, Ditta, struggled financially, surviving on a small stipend from Columbia University where they spent several years transcribing the school's extensive collection of Serbian and Croatian folk music. New York no doubt also contributed to Bartók's rapid physical deterioration: after years of pain and suffering, he was finally diagnosed with leukemia, the disease which eventually claimed his life in 1945.

As the above video with Esa-Pekka Salonen points out, shot last year by London's Philharmonia Orchestra, Bartók was almost completely unknown during his time in New York. His few concerts as a pianist were poorly attended, and when he passed away, only 10 people attended his funeral. Contrast that with Bartók's contemporary Igor Stravinsky, who also died in New York (in 1971) but was hailed as the most famous composer in the world. Given Bartók's reputation as one of the greatest composers of the 20th century, such neglect seems not only unjust, but completely unfathomable. (The presiding orthodoxy of Serialism was apparently at least partly to blame.)

But, despite all of this hardship, Bartók's time in New York wasn't completely tragic. In the final year of his life, Bartók found a burst of creativity that yielded several masterpieces, including the 3rd Piano Concerto, the Viola Concerto, the Sonata for Solo Violin - and, most famously, the Concerto for Orchestra, which Serge Koussevitsky commissioned from him in order to give him a chance to earn some money. Ironically, it was the wild success of the Concerto for Orchestra which allowed American audiences to embrace Bartók's earlier work, a process which continues to this day. (See my post about Lang Lang's performance of the 2nd Piano Concerto just last week.)

If you ever find yourself on 57th Street between 8th and 9th Aves., you might happen across a small plaque on the north side of the street, with a bronze bust situated above it. Upon closer examination, you'll notice that it marks the apartment where Bartók lived and worked during that fertile last year of his life. With no shortage of well-known composers currently living in NYC, it's would be easy to overlook this modest historical monument, signifying what an obscure Hungarian did here some 70 years ago. But, for me, it represents an indispensible link in the great chain of music, one that stretches from here to Hungary, and all points beyond - a reminder that great art will always transcend time and place no matter where it's created, or how long it takes to be recognized. It's just one more reason why I'm proud to call this place home. 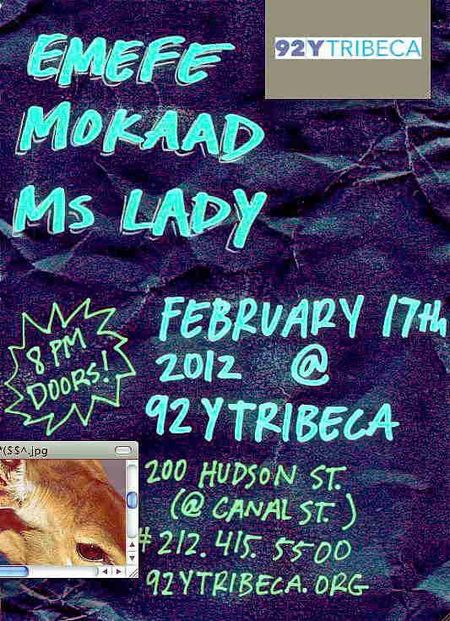 EMEFE - which means "Music Frees All" - play 92Y Tribeca's Mainstage on Feb. 17, along with Mokaad and Ms. Lady. Created by drummer Miles Arntzen in 2009, EMEFE combines Afrobeat with funk, jazz and hip-hop by way of guitars, percussionists, and a 4-piece horn section, creating a larger-than-life sound that dares you not to dance. Tickets are $10 and available here. 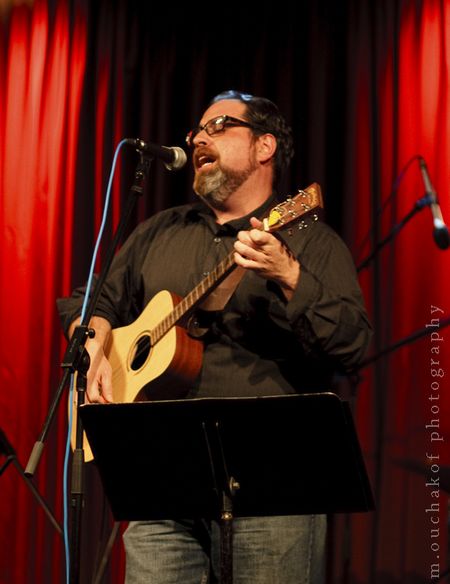 The musical journey began with Fernandez-Fox’s Cuban-inspired folk music, with harmonized vocals and tres over subtle Latin beats. Noting that “great poetry and great art is universal,” Fernandez-Fox filled the room with a warmth that lasted throughout the night. The lively “El Niño Tiene Clave,” based on the notion that Cuban children "are born with a Rumba heartbeat," left the crowd energized and asking for more. With Delexilio, more is exactly what we received. The rock-inspired group burst onstage with their eclectic, funk-inspired Latin rhythms over bi-lingual, oft-rapped lyrics, demonstrating their diverse influences. The group also has a keen sense of their Cuban-American heritage as demonstrated in “Fiesta En Las Calles De Miami,” which included a Miami Sound Machine tease as the outro.

Rounding out the night was David Oquendo y Habana Tres, substituting the traditional Cuban horn section with saxophone and flute, bringing a different dimension to the music. Bright tunes backed by Bossa rhythms brought smiles to everyone’s faces and, at times, even had us dancing in the aisles. The journey complete, we had made our way from Havana back to the streets of New York. 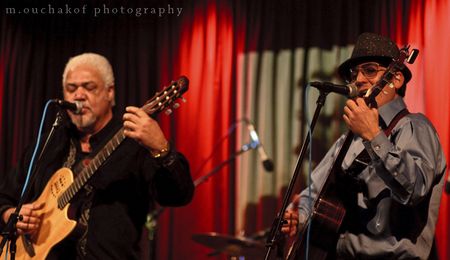