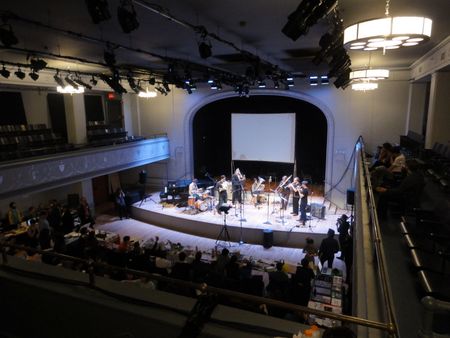 It's hard to believe that it's been three years since the first New Music Bake Sale was held in a church attic in Brooklyn Heights. After moving to the Irondale Center in 2010, organizers took last year off. Fortunately, the fun, adorably dorky event resurfaced again last night at the new Roulette, where the ground floor seats had all been replaced with long tables, featuring various new music groups purveying baked goods, along with their standard merch of CDs, buttons, and tote bags.

The event, which started at four in the afternoon, was a marathon affair, featuring well-seasoned vets like Newspeak and Janus along with young upstarts like Sweat Lodge and Concert Black (who performed the first movement from Robert Honstein's amazingly titled, RE: You better find those little blue pills if you plan on giving her more than lip service.)

Unfortunately,  I didn't get there 'til late, but was still in time to see brass ensemble Tilt (including Matt Marks, Chris McIntyre and others) play Mauricio Kagel's "10 Marches (to miss the victory)" and Jon Gibson's "Multiples." Then, to close the night, fusion rock/new music ensemble Gutbucket blew it out, with Ken Thomson going apeshit on alto. Fun times on a Sunday night. Hands off my Sister @Hill Country 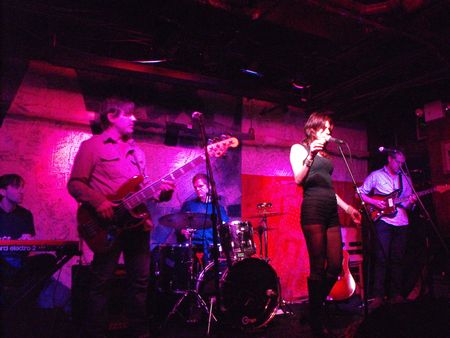 While it may seem hard at times to find a little bit of country in NYC, sitting in front of a wall of cowboy boots and an army of plaid-clad staff in Chelsea’s Hill Country makes it easy to forget about the skyscrapers and parking meters waiting for you outside. And what better than a punk-grass, southern rock blues band to make an urban saloon seem like the best idea you’ve had in a long time?

On Saturday, the NYC five piece Hands off my Sister rose above the stench of beer and barbeque with an anachronistic flair for sexy, southern-style tunes to beat the country and blues at their own game. While all of the beats, licks, thumps, and moans of traditional country and blues sat there in place, a tip of the hat to stoner-rock, 70's pop and American rock’n’roll  put a spin on things that left you hungry for whatever was coming next.

Ross Pederson’s punk approach to the drums took the audience by the throat while Paul Orbell’s quick-picked Jazzmaster danced on a rock solid rhythm and inspired an intoxicating groove in the room. But, what truly set the band apart was singer and guitarist Erin Sax as she swaggered, hollered, and moaned in front of the Lone Star backdrop like Joan Jett singing Johnny Cash.

A rockabilly cover of Springsteen’s “I’m on Fire” ironically showed the quintessential style of the band: as Erin swung from her mic stand and the bass and drums held the fort, the meeting of traditional and contemporary served to take even haters of country on a field trip to Texas and home with a t-shirt. (Edit: Ironically, for those who haven't heard, the Boss is headed to Texas to give the keynote address at SXSW this Thursday, followed by an intimate show that'll be harder to get into than Jerry Jones' box at Cowboys Stadium.)

If you can’t handle an ounce of the South, these guys may not be your ideal night out, but if you love a heartfelt jive and a woman with attitude, “Hands off my Sister” are an act sure to fill your desire for country, rock’n’roll, and all things in-between. 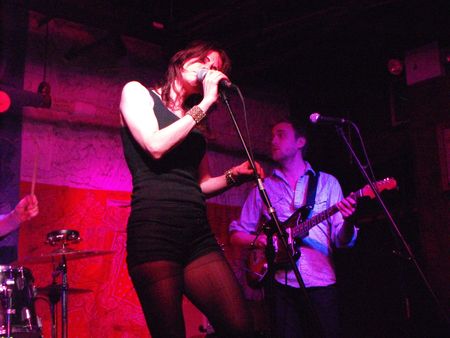 Inspired by the rock fury of Hunter Valentine at Bowery Electric on Friday night, I resorted to researching historic female warriors for comparisons. As it turns out, women trained and fought battles to entertain the masses, just as men did. As powerful as the Roman Empire’s Gladiatrix, Hunter Valentine suggested that they were ready for anything.

Gazing around the venue revealed a nearly all female audience, all of whom filled the main floor and pushed their way as close to the stage as possible. Indeed, the Bowery Electric, with its subterranean stone walls, had become a sort-of miniature Colosseum. Emerging from backstage with their artillery of guitars, drums, and a giant bottle of Jack Daniels, the women were prepared to give the crowd what they came for: a racy, thunderous show.

I’ve heard many musicians talk about it, but this was the first time I actually felt like I’d experienced a true wall of sound. Every frequency and texture in the spectrum was covered and had its designated place in the mix. Their sound being my trigger, I found myself moving to the music without even deciding to. It was as if they were gladiatrices battling lions: you could feel the roar in your chest. 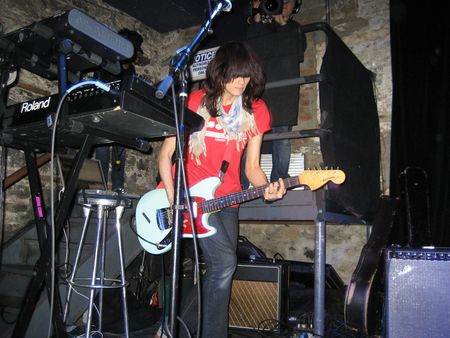 The authenticity and drive put forward by all four players in the band was simply enthralling. Frontwoman and guitarist Kiyomi McCloskey started the group in 2004 with drummer Laura Petracca; the band also includes bassist Vero Sanchez and multi-instrumentalist Somer Rizham, who adds keys, guitar, and other digital effects to the mix, keeping the energy at a consistent peak. Kiyomi packs a punch with her lyrics, injecting adrenaline into every listener. Laura brought heavy, rock-solid rhythm and vocal harmonies. This being her second tour with the group, Vero owned the stage and had magnetic presence.

See the video below to hear a backstage interview with the band and view more photos from the night.