Modern Beethoven Festival at the New York Phil: Symphonies 8 and 4 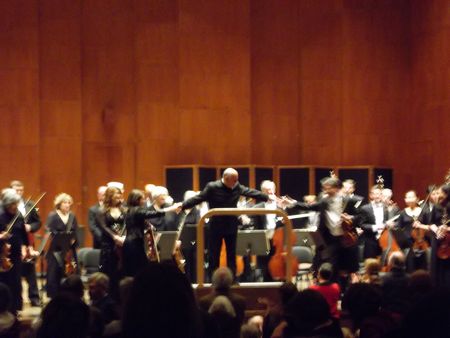 The New York Philharmonic’s Modern Beethoven Festival began earlier this month, kicking of with the 2nd and 7th symphonies and Stravinsky’s Capriccio for Piano and Orchestra. Each concert, led by esteemed Beethoven interpreter David Zinman, features two of Beethoven’s symphonies paired with a modern concerto. Saturday's concert featured the 8th and the 4th, with Alisa Weilerstein playing Barber's Cello Concerto.

Beethoven’s symphonies are more often than not presented as more of the same. Orchestras rarely offer a new take on Beethoven’s work; both the symphonic musicians and the conductor have performed these works dozens of times. David Zinman, however, seeks something fresh and new in Beethoven: “Whether or not one takes repeats or uses vibrato or performs on modern instruments is not the issue.” Too often, interpreters debate these factors in pursuit of authenticity. His approach is refreshing and it paid off: his interpretations of the 8th and 4th symphonies were vivid and compelling.

Both the 8th and the 4th have been viewed as lesser works, sandwiched between more epic and popular symphonies – the 8th between the luxurious 7th and the earth-shattering 9th, the 4th between the majestic 3rd and the titanic 5th.

The 8th, however, is a joy to see performed. At a compact 27 minutes, it never loses its momentum. Although viewed by many as a throwback to the classical era, the wit and oddities throughout the piece declare it unmistakably Beethoven. The F major finale’s theme pops up in F-sharp minor – perplexing his colleagues and later musicians alike. Zinman brought out these modern touches, and his vibrant conducting showed that he knows every note of these symphonies.

The Barber Cello Concerto featured Alisa Weilerstein, who played the famously difficult part with virtuosic energy. The lyrical melodies of the Adagio shone as well, reminiscent of Brahms – the only noticeable romantic feature of a "neo-Romantic" piece. Weilerstein received several curtain calls, the most applause for any piece on the program.

After the energetic 8th and Weilerstein’s stunning performance, the effect of the 4th symphony was diminished. However, the playful first movement and the vigor of the finale were enough to propel it to a close. It was met with notably tepid applause, the only program-closing piece at the Philharmonic I’ve seen in a long time that didn't prompt the obligatory standing ovation.

Zinman’s Beethoven will not convert any non-fans, but compared to the complacency with which which many orchestras approach Beethoven, his interpretations are perhaps the most important out there today.