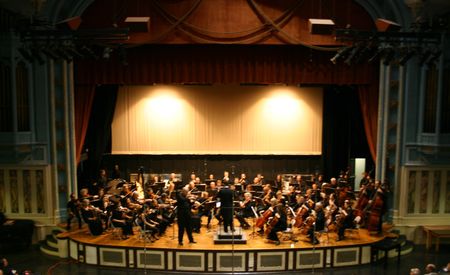 Greenwich Village Orchestra concertmaster Robert Hayden was out of his chair and center stage on Sunday afternoon, turning in a yeoman-like performance of Aram Khachaturian's Violin Concerto, under the baton of guest conductor Farkhad Khudyev. It's a big score with a particularly sprawling first movement, but Mr. Hayden and the orchestra kept up with all of its rhythmical intricacies. Unfortunately, Washington Irving Auditorium, although spatially captivating (I would have been much happier about going to assemblies if MY high school auditorium looked like this), was less than acoustically ideal, flattening out the soloist's dynamics and inappropriately highlighting some of the supporting woodwinds. Nonetheless, the essential character of the work, half movie music and half Armenian festival, came across well.

The first half began with another Khachaturian piece, the famous Sabre Dance. Mr. Khudyev appeared to be directing the orchestra in this piece primarily by bouncing on his heels—in fact, I hardly saw him lift the baton. Whatever he was doing, however, yielded results, and the orchestra hit all of their marks in this challenging musical sketch.

The concert's second half was owned by Brahms' Third Symphony. Although the shortest of Brahms' four symphonies, the work, like all of the composer's orchestral scores, requires a high degree of virtuousity. The GVO played it with warmth and clarity—most notably in the warm brass sounds throughout and the third movement's horn solo. Brahms, like many Romantics, tucked away a musical motif (F-A-F, "frei aber froh," or "free but happy") into the symphony. Here, the F-A-F theme, which is initially stated as a boldly dramatic descent, sneaks back in the strings near the end of the last movement, this time as a hushed interior voice that slyly closes the motivic cycle. Mr. Khudyev took care to make this relationship clear, convincingly finishing a very satisfying Sunday afternoon in the Village.

This year's GVO season ends on May 20 with an all-Russian program of Shotakovich and Tchaikovsky.

The Psychedelic Furs at Maxwells Sunday night, legendary British new wave band, The Psychedelic Furs, took to the tiny stage at Maxwell's in Hoboken for the second  night in a row to play their hits and induce 80s nostalgia for all.  Fronted by singer/ songwriter Richard Butler, the current lineup of The Furs treated a largely Gen-X audience to songs including "Pretty in Pink" (famously swiped by John Hughes for his popular 80s movie of the same name) "Heartbreak Beat", "Love My Way", "Heaven", and "The Ghost In You". Mars Williams kept true to 1980s post-punk sound, with plentiful saxophone solos, even swapping for a clarinet at times, proving that woodwind instruments have come a long way since "Hot Cross Buns."

The Psychedelic Furs play again tonight in Englewood, NJ, before heading to Londonderry, NH and Toronto for additional tour dates. 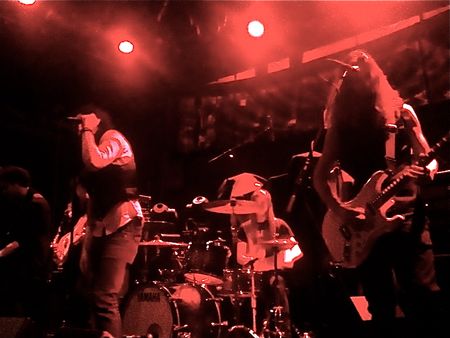 Saturday’s Killcode album release extravaganza at the Bowery Ballroom ended up presenting an interesting question: has metal - or even hard rock - really evolved at all in the last twenty-some years? The evening began with a performance by Vajra, freshly returned to the city from SXSW. With Annamaria Pinna’s soaring vocals and her backing band's kinetic playing, they were clearly toeing the Nightwish line with a heavy dose of Far Eastern-influenced sounds, and even a bit of Lady Gaga thrown in for good measure. It was hardly a surprise when a gaggle of concert goers, drinks in hand, scurried up from the bar, heeding the siren’s call.

Stoned Fire was by far the least metal of the bunch. Clearly inspired by the greats (Led Zeppelin) and pseudo-greats (Wolfmother) who blazed the path before, the boys let loose a rousing set that had the front row - comprised entirely of ladies - dancing and writhing with glee. Peter Krsikapa’s prowess as a lead singer is palpable, his hips a tornado of insinuating gyrations. Sean Battista’s shredding and Nate Honor’s drumming were ideal foils: heavy on the reverb and raw power. Who doesn’t love a hot rock god that sings about love and lust and all the torments of the heart? It went down as smooth as whiskey. Amidst all my running around this weekend, it almost slipped past me that today would have been Bartók's 131st birthday. As timeless and transcendent as Bartók's music continues to be, sometimes we need a little reminder that Bartók was as much a folk musician as he was a classical composer, devoting a good portion of his life to preserving the indigenous music of his native Hungary (which is how he and his wife Ditta spent their first year in NYC, working at Columbia University.)

Enter Jake Schepps, a banjo player from Boulder, CO who has transcribed some 20 Bartók compositions for string band; no doubt Bartók himself would have approved. Schepps' album, An Evening In The Village, is available today only as a free download; go here for details. You can also stream the album below.