Yuka Honda's Eucademix at The Stone 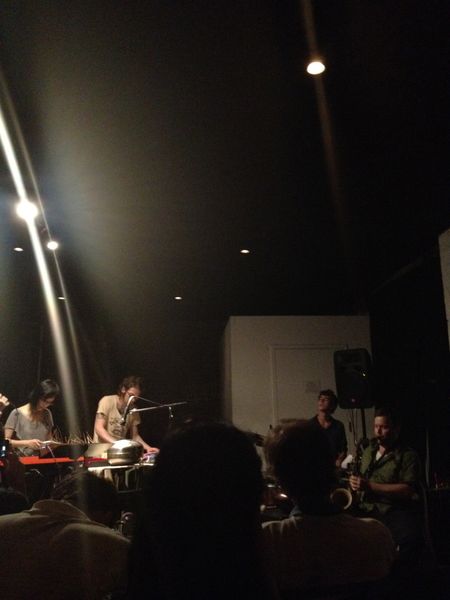 In my first ever visit to The Stone in Manhattan's East Village, I found myself lost; literally—I could not find the venue. Sure enough, though, on the corner of 2nd and Avenue C, a nondescript door was plainly marked with the lowercase lettering of "the stone." When they eventually let us in, we were treated to the venue's sparse decor: no more than 75 or so folding chairs and the band's instrument setup. For tonight's show, Yuka Honda brought together a collection of fantastic musicians to play a 45-minute set of mostly improvised music.

Before the show, I had asked the drummer, Miles Arntzen of EMEFE, Superhuman Happiness and Antibalas, what to expect from tonight, and his reply fit the tone perfectly: "To be honest I have no clue!! Something cool though." Once the band had begun to play, after some small technical glitches at the beginning, they slowly cooked up a foot-stomping rhythm. The keyboards and other electronics from Honda and Jared Samuel (also of Superhuman Happiness), as well as the snaking baselines from Sean Lennon, laid a nice foundation for Stuart Bogie's saxophone wails. About 15 minutes into this improvisation, the band hit a collective peak as they amplified in volume, with Arntzen's pounding bass drum and powerful hi-hat hits complimenting Bogie's horn stabs and Honda's specially made Yamaha kaossilator-esque device. 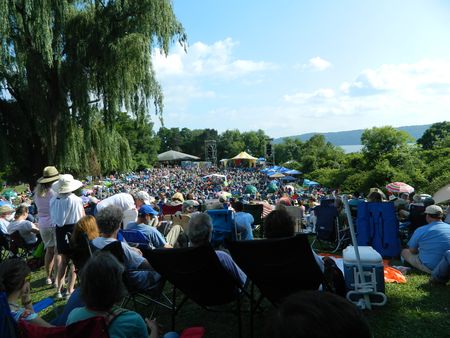 A quick hop on Metro North from the hustle and bustle of NYC will take you to one of the most stunning marvels located on the sparkling Hudson River. On the Croton Point Park fair grounds, a spiritual kindred of music and activism by way of Pete Seeger and Woody Guthrie lives. Deeply rooted in folk, Clearwater is unique to the festival scene in that when attendees leave, their stride is a bit more proactive; they are more socially aware, yearning to be part of something bigger than themselves. Installations of pop, rock and world music in recent have stirred things up in progressive fashion and with each artist’s support of Clearwater’s activism, positive change is in fact surmountable.

Come Saturday, Pete Seeger and Arlo Guthrie joined forces on “This Land Is Your Land” and it seemed as though every other performance would pale in comparison, but the energy and emotion remained all weekend; Bob Dylan and Buffalo Springfield covers from veteran performers were testament. Younger bands like Dawes and Deer Tick fared well with a generation-gapped crowd, bridging together the Neil Young and Nirvana years, and the plethora that fall between. Each band was happily welcomed by families, and for existing fans, the performances were beyond compare. Folk rock quartet, Dawes weaved through North Hills and their more recent Nothing Is Wrong; fan favorites included “Time Spent In Los Angeles” and “If I Wanted Someone” where dangling ivories frolic around manicured riffs. The latter track, laced with Tom Petty chords hooks immediately, only to be replaced by Goldsmith’s heart-on-sleeve lyricism. 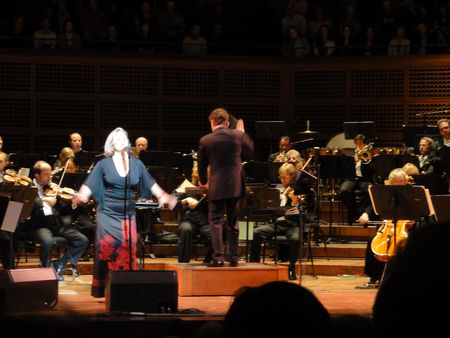 SAN FRANCISCO, CA - I'm usually wary about rock artist-symphony mash-ups, but Natalie Merchant made it work elegantly on Monday night, when she performed with the San Francisco Symphony at Davies Hall. Thirty years on in her career, Natalie is now gray-haired but still exudes youthful energy on stage, leisurely spinning and dancing just like she did when she was the lead singer of 10,000 Maniacs 20-plus years ago.

In the first half of the program, conductor James Bagwell worked as a quiet guide through her songs, letting the smoldering power of the lyrics come through. Most of the songs with full orchestra were from her latest album, Leave Your Sleep -- a collection of music adapted from 19th and 20th century British and American poetry about childhood.

Merchant’s distinctive dark, modulating voice - which, if anything, sounds more burnished now than in her youth - was crushingly delicate in older songs like "Life is Sweet," off Ophelia. The lyrics “I tell you life is sweet…in spite of the misery…there's so much more…be grateful,” hit home far more now than when they were originally released 15 years ago.

For the final few songs, Merchant performed with only Uri Sharlin (piano) and Gabriel Gordon (acoustic guitar). Throughout, Merchant and Gordon kept things loose, joking back and forth about which verse was next, where Gordon should capo his guitar, and how much time had passed since the song was originally released. From the 15th row, it felt like we were sitting in Natalie’s living room, watching her and a few friends jam on old favorites while the audience clapped along, negotiating with Natalie to play "one... ok, two" more songs.

For all of the cheese potential of the "crossover" symphony-pop show, this was one concert that moved and thrilled on almost every level. Call me converted.

Set list below. More pics on the photo page. 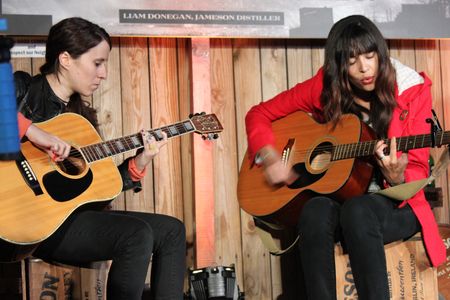 One of the best parts about being a member of the press is that sometimes you get to go to really cool press-only events. For Northside Festival, Jameson took over Good Co., creating a veritable whiskey-filled Valhalla for press, bands and the bartenders that have to deal with both. It was pretty sweet, and I could see how easy it would be to spend the entire weekend throwing back “Black & Stormies”, eating roast pig, and listening to whatever buzzy, cool band was playing.

Unfortunately, whatever sound system there was was either not functioning or turned down excessively low so only those closest to the makeshift stage/porch could hear. That was a shame, especially when Beach Day took the stage on Saturday night to play an acoustic set with just Kimmy and Natalie strumming gently on their guitars while drummer Sklyer stood in the audience. I wasn’t previously familiar with this band’s work at all, but I’m glad I sat close enough to hear them play. Soulful and romantic, songs like “I’m So In Love With You Again” felt wonderfully appropriate for a breezy June night. Kimmy’s pure voice shone brightly, reaching every note with ease and elegance and perfectly matching the folksy, love-centric lyrics. Yes, Beach Day’s sound is extremely beachy, and exactly the sort of thing you long to hear as you tilt your head back and imagine you’re on some distant sandy shore far from Brooklyn.