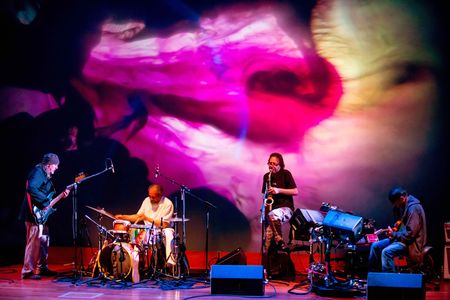 This weekend, The Joshua Light Show appeared at NYU’s Skirball Center, with each evening pairing a different set of musicians. Friday evening featured two concerts, the first by minimalist composer Terry Riley and his son, guitarist Gyan Riley. Known as one of the founding fathers of minimalism, the elder Riley’s work in tonal exploration has led him in a multitude of cultural directions. Riffing on themes that spanned from baroque to jazz and from Eastern to alien, the duo improvised a mesmerizing journey through the abstract.

The light show tied the concert together, using a wide range of techniques to create images that delineated and reacted to the music. The colors were deeply saturated, far more visceral than any projections I’d seen before. The result was like a live remix of the opening sequence of Fantasia, and never felt like the digital mindlessness of the iTunes visualizer.

The evening's second concert featured Lou Reed, John Zorn, Bill Laswell, and Milford Graves. Their slow, casual entrance belied the onslaught of sound they were about to unleash; after a melancholy saxophone solo, the quartet sprang into action. 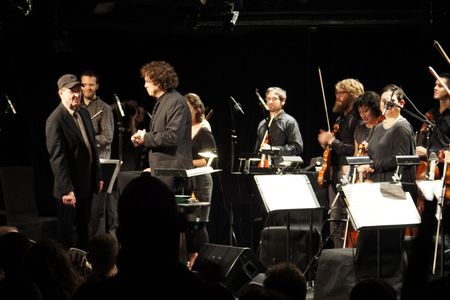 The fall season begins with something completely different: The Joshua Light Show will be at NYU's Skirball Center from September 13-16. Since the 1960s, the group has been creating innovative pieces for display at high-profile musuems, including the Whitney, the Tate, and Centre Pompidou. This weekend they will be using their projections, lumia, and liquid light as the foundation for collaboration with some of the most exciting names in contemporary music: Dame Evelyn Glennie and Zeena Parkins (Thursday at 7:30), Terry Riley and Gyan Riley (Friday at 7:30), John Zorn, Lou Reed, Bill Laswell, and Milford Graves (Friday at 10), Ben Goldwasser and Andrew VanWyngarden of MGMT (Saturday at 7:30 & 10), as well as Debo Band and Forro in the Dark (Sunday at 7:30).