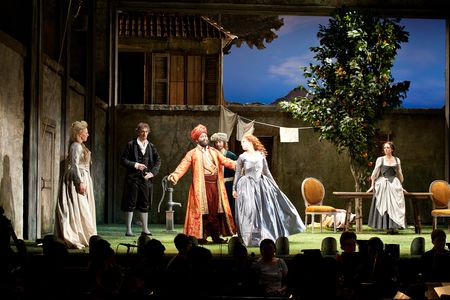 Attending a co-production of Juilliard and the Metropolitan Opera’s Lindemann Program can feel similar to a high-school match at the steroidy heights of recruiting season. Last weekend at their production of Mozart’s Cosi Fan Tutti, beaming parents flocked into Juilliard’s Peter Jay Sharp Theater alongside the stars, agents, and cronies of the opera world. The young artists in the Lindeman Program may already be singing small roles at the Metropolitan Opera, but this was a chance to show how they fared in a leading role. They did not disappoint, bringing freshness and vigor to Mozart’s exploration of love and the limits of fidelity.

As aggressively modern as a sitcom, the plot focuses around two sisters, Fiordiligi (Emalie Savoy) and Dorabella (Wallis Giunta), who are happily in love with Ferrando (Alexander Lewis) and Guglielmo (Luthando Qave). The men are goaded into a bet with Don Alfonso (Evan Hughes) to test their lovers’ fidelity. Add in the scheming maid Despina (Naomi O'Connell), and you get an evening of mistaken identities, changing affections, and plenty of groping.

Alan Gilbert led the Juilliard Orchestra in a brisk and youthful reading of the score. Onstage, Savoy displayed an inhuman ability to navigate the treacherous shifts in vocal register, moving from a rich chest voice to creamy high notes. As her sister, Giunta displayed a clear soprano and a feisty stage presence. O’Connell brought a focused mezzo to the comic part of Despina, managing to negotiate the comedy without resorting to excessive mugging. 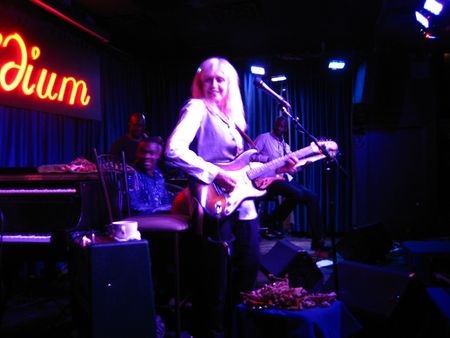 Since I didn’t get to fly home this year for Thanksgiving, my experience of seeing Leni Stern perform at Iridium last Wednesday became my holiday. The absolute joy that Leni and the members of her band displayed as they struck each note spread through the space like an earthy aroma.

Smoke, No Fire, Stern's 13th release, was recorded in Bamako, Mali. Live, Stern's sound was so intimate it felt like I was being led on a tour through a small West African town—a community circle where history, legends, and myths are shared. Stern's electric guitar blended jazz with traditional African rhythms, triggering swaying movements that began at the torso.

After her set, I wanted to talk to Leni about her music, but instead joined in on a larger conversation about her experiences in Mali. The great civil unrest that has overtaken the country presents many perils to visitors of other nationalities, where kidnappings and capital crimes are rampant: I even learned that it's wise to have a bodyguard if you're an albino, since albino blood is believed to have magical powers. There were beautiful stories about fun times during every new moon, when kids are gifted with candy and coins. As I listened, I soon realized that all of these experiences directly contributed to the healing energy of her music.

Leni Stern is a messenger armed with a voice, guitar, and lute. She delivers love, hope, and freedom of spirit, with her songs awakening the soul. 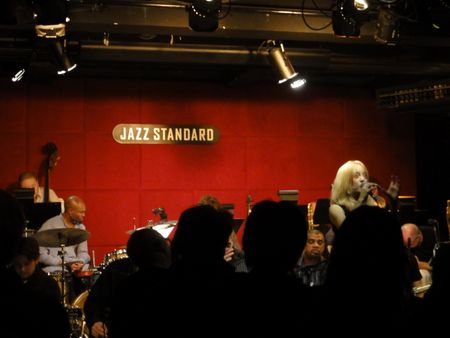 It's become something of a Thanksgiving tradition of mine to go see the Maria Schneider Orchestra at the Jazz Standard, where she's appeared each year this week for at least a decade. Schneider, a protege of both Gil Evans and Bob Brookmeyer, has two Grammys to her credit, along with a performance career that's now stretched over two decades. (Her orchestra used to have a weekly residency at the Village's late, lamented Visiones.) She's also, it must be said, the most prominent woman ever to lead a major jazz orchestra, and it shows in her elegant, virtuosic arrangements that conjure images of flowers, rainbows, and other less-than-macho objects.

Capping last night's late set was "Cerulean Skies," her Grammy winner from 2007's Sky Blue—a protracted ode to Schneider's love of birds, replete with bird calls, an extended solo for accordion, and a wild, ecstatic blast from saxophonist Donny McCaslin. Maria called it a night around 12:30, letting the band grab a well-deserved drink after their third set of the evening. No one wanted to leave, with lots of old friends catching up with Maria and the other members of the band until the wee hours.

Schneider's latest project is a collaboration with Dawn Upshaw on two new works for chamber orchestra, which she just finished recording with the St. Paul Chamber Orchestra. As with Schneider's other recordings, this one is being funded through fan support via Artist Direct; visit the website to find out more.