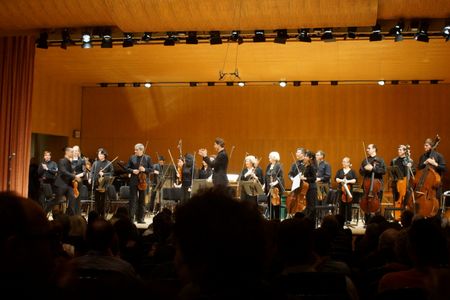 The NY Phil's CONTACT! new-music series, now in its fourth season, has become something of a holiday ritual for New Yorkers—at least for those looking for an alternative from the endless parade of Messiah performances. (If you happen to like your Handel, the Phil can help you out there, too.) As in past years, last Friday's concert at the Met Museum included new works by young composers written for the occasion, as well as a contemporary "classic" that might appeal to the generation of subscribers who went to Pierre Boulez's Rug Concerts or Jacob Druckman's Horizons series.

Conspicuously missing this time out was conductor Alan Gilbert, who founded CONTACT! during his first season as the Phil's Music Director, and has since led most performances himself. Taking his place was Jayce Ogren: a young, unknown Washington State native who once served as Gilbert's apprentice while both were stationed in Stockholm. Ogren, himself a composer who once had his own Seattle-based band, told host John Schaefer that he feels most at home conducting new music.

The first three works on the program were all by composers in their early thirties, and seemed to follow the same sonic blueprint: loud, raucous beginning, and a slow fade at the end. Andy Akiho—best known for his steel pan music—wrote Oscillate for a small band of strings and percussion, including a piano that persistently plunked a single note over and over. Inspired by the troubled inventor-genius Nikola Tesla, Akiho's music was filled with scratches, clangs, and other unusual sounds that somehow managed to engage. (In the program notes, Akhio says he wrote the work in a sleepless three-day fit, much as Tesla himself might have done when conjuring one of his inventions.)

Yarn/Wire Perform Music for the Winter Solstice at Roulette 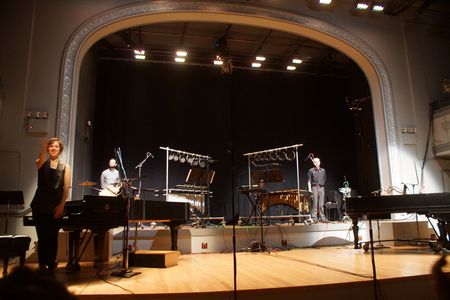 The ongoing new-music series Ear Heart Music had its final show of 2012 at Roulette last Tuesday with a program by piano/percussion quartet Yarn/Wire, playing a pair of premieres inspired by the cold, dark landscape of the winter solstice. In her opening remarks, Ear Heart Music Artistic Director Amelia Lukas prepped us for the quiet, glacial pace of the program. "Relax, and go with it," she said. "As much as we're afraid of the dark, all good ideas are born there."

Davi∂ Brynjar Franzson's Negotiation of Context began hauntingly with Laura Berger and Ning Yu playing inside their pianos while Ian Antonio and Russell Greenberg plucked strings suspended above their bass drums. The alien, almost amusical sounds brought to mind George Crumb's far-out piano music. (Crumb's "A Little Suite for Christmas, A.D. 1979" should be on any self-respecting gourmand's holiday playlist.) In the end, Franzson may have succeeded in his goal of exploring sounds in various contexts, but fell short of making any kind of coherent musical statement.

Cenk Ergün's Solus was even more subdued, using bowed piano strings and vibes to create an ethereal soundscape, almost Feldman-like in its slowness. Which, I suppose, is not unlike winter itself. 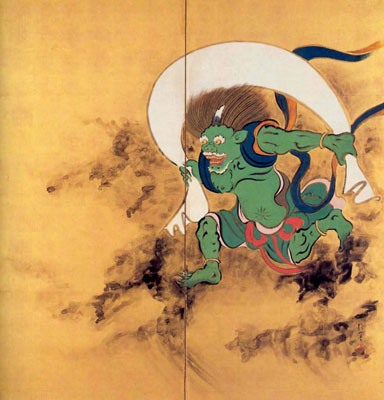 Part of a painting by Sakai Hōitsu

Much has been made of the parallels between music and the visual arts: Debussy’s love of Turner's seascapes, Rauchenberg’s White Paintings providing the inspiration for Cage's 4’33. Such was the case with the Bang on a Can All-Stars’ recent Rimpa Reimagined concert at the Japan Society. The program took its name from the Rimpa School of Japanese painting and, more specifically, the work of Sakai Hōitsu—a samurai-turned-monk who was responsible for the form’s resurgence during the 19th century. (The Japan Society's Rimpa retrospective Silver Wind will be on display until January 6, 2013.)

Japanese post-minimalist Mamoru Fujieda's "Gamelan Cherry" was composed with the curious method of recording the surface electric potential charges of a cherry tree, then taking that data and translating it into melodic patterns. Exploring a wide range of tonal extremes, the work’s two movements were knit together by a melodic refrain played by bassist Robert Black and cellist Felix Fan (filling in for Ashley Bathgate, who recently underwent surgery to repair a torn tendon in her finger).

“Gamelan Cherry,” part of a larger set called Patterns of Plants, employed a pentatonic scale reminiscent of Indonesian gamelan music, which was a good starting point for developing the work’s logic. I took issue, however, when Fujieda scored a percussion passage for kempul gongs, an instrument whose deep beauty relies partially from its non-Western tuning system. I found its brief insertion in the piece, for lack of a better discription, Eurocentrically normative. 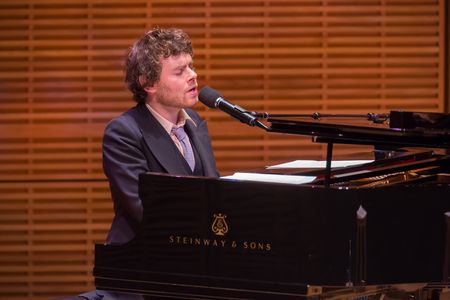 Monday’s (un)common threads performance with Gabriel Kahane at Zankel Hall began on a somber note. Jimmy Zankel, co-chair for the Notables Committee that hosted the event, asked the audience to pause for a moment of silence to remember the lives lost and deeply effected by both Sandy and the massacre in Newtown, CT. It was a beautiful and respectful moment that punctured an otherwise joyous and fun evening with a touch of reality.

Zankel also spoke about the power of music to heal, and Kahane set out to do just that. He opened with "Charming Disease," a sophisticated and subtly painful ode to the depths of alcohol addiction. His rich, strong baritone allowed every word to shine brightly, revealing his exceptional skill as a lyricist. Much like Jimmy Webb or Paul Simon, Kahane has a real ability for weaving eloquent and vivid stories into his songs; it was hardly a surprise to discover he had written a musical, February House, that premiered at the Public Theater this past spring.