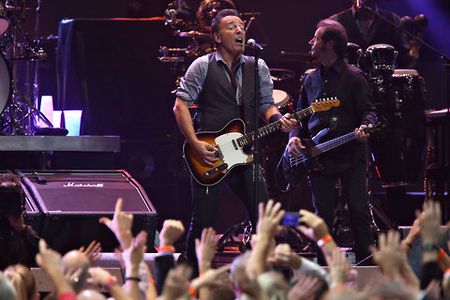 Only a city like New York could pull of a benefit concert of this magnitude: gathered tonight at Madison Square Garden is a Who's Who of rock royalty from the past 50 years. Just check out this lineup:

Ravi Shankar, who passed away yesterday and helped organize the Concert for Bangladesh at MSG 41 years ago, would be proud.

The Prophet of New Jersey, Bruce Springsteen, kicked things off tonight with "City of Ruins" (from 2002's The Rising):

Come on rise up!
Come on rise up!
Now there's tears on the pillow
darling where we slept
and you took my heart when you left
without your sweet kiss
my soul is lost, my friend
Now tell me how do I begin again?

Go here to find out where you can watch on TV or online. If you feel like donating to the cause, all proceeds go to the Robin Hood Relief Fund. 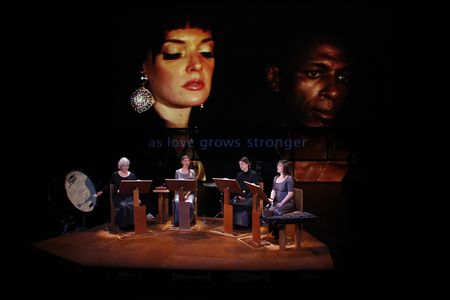 "I don't even like vocal music. I'm far more interested in words than I am with music." - David Lang

David Lang has long been one of our most haunting, mesmerizing composers. He writes slow-moving music that burrows under your skin and stays there, for days or even weeks. Still, for most of his adult life, Lang has been best known as one of the founders of Bang on a Can: the down-to-earth collective of new music troublemakers that celebrated their 25th anniversary this year.

Things changed for David in 2007, when he won the Pulitzer Prize for the little match girl passion, a 30-minute retelling of the Hans Christian Anderson story about a girl who freezes to death while trying to sell matches on the street. The work, written for for Paul Hillier's Theater of Voices, combined a vocal quartet with occasional percussion, notably a deeply resonating bass drum that struck an ominous, atavistic tone.

Lang returned to the sound world of match girl last week at BAM's Harvey Theater with the New York Premiere of love fail: an evening-length song cycle based on the star-crossed love story of Tristan and Isolde. Commissioned by Anonymous 4—the celebrated female quartet best known for their performances of ancient music—Lang strung together obscure takes on Tristan by everyone from the 12th-century poet Gottfried von Strassburg to Richard Wagner, whose well-known opera served less as role model for love fail than as something to assiduously avoid. 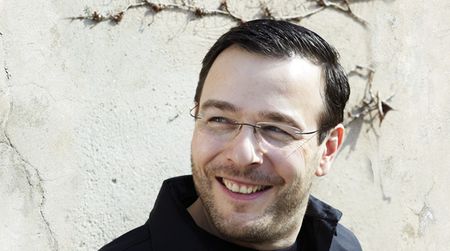 Saturday's recital at Alice Tully Hall began with an endearing episode. The damp late-Autumn weather, as it sometimes does for many of us, played havoc with star countertenor Andreas Scholl's vocal cords. One verse into John Dowland's "Flow My Tears," Mr. Scholl stepped offstage to properly clear his throat. His accompanist and partner Tamar Halperin smiled to the audience, shrugged, and vamped some Baroque piano. Both performers were so good-humored and frank about the glitch that the audience gave Mr. Scholl a long ovation upon his return to the stage and was in his pocket for the rest of the night.

This sort of magical intimacy persisted throughout the evening, as Mr. Scholl seduced his audience in a program of song. The countertenor, a male voice in the alto range, requires conscious effort to produce and has within it an inherent energy that the alto lacks. Mr. Scholl's free-floating, perfectly tuned voice had both this energy and yet repose, an ear-tickling combination. 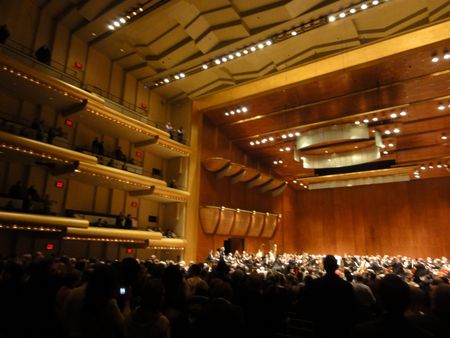 Longtime readers of FoM know that I haven't minced words about the visual and aural eyesore that is Avery Fisher Hall, by far the worst concert hall of any major orchestra in the U.S., if not the world. So, imagine my excitement when the Times reported last week that plans are finally underway to renovate that godforsaken barn, though construction is "not expected to start before 2017." No rush, NYPhil.

Last week, I was invited to participate in a WQXR roundtable discussion (albeit remotely) on the AFH renovation with NY Mag's music and architecture critic Justin Davidson and Carroll Joynes, a senior research fellow at the of the University of Chicago. For my part, I talked about what Lincoln Center could learn from some of the more successful new halls I've visited over the past year - including LA's Disney Hall, Miami's New World Center, and Montreal's Maison Symphonique - as well as from the rock world. No word if Matthew or Alan were listening.

Listen to the full discussion below or online, and share your own thoughts below.