Home Archives About Subscribe Concert Calendar Advertising Work For Us Contact
Previous month:
May 3, 2013
Next month:
May 7, 2013 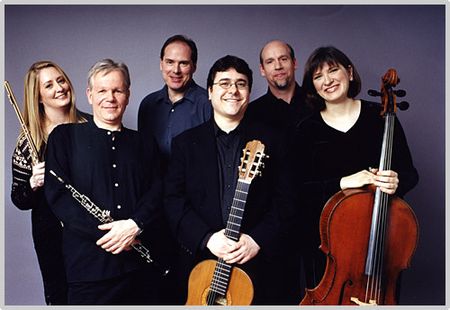 Cutting Edge Concerts New Music Festival has brought the contemporary music of living composers together with New York audiences since its inception in 1998. Last week CECNMF presented this season’s final concert at Symphony Space: a six-piece program performed by members of the contemporary chamber ensemble Cygnus. Each of the featured composers spoke briefly about their pieces—a helpful gesture that gave the audience a better chance to understand their music.

The highlight of the evening was undoubtedly Laura Kaminsky’s Homage to Havel, a tribute to the Czech Republic’s first president, Václav Havel. Kaminsky, who is also Symphony Space’s Artistic Director, is a skilled composer who fully understands the capabilities and strengths of each instrument, combining sounds in a way that is both intriguing and unique. Her thought-provoking piece was electrifying throughout and Cygnus performed it with energetic confidence. In particular, oboist James Austin Smith’s lengthy solos accentuated his smooth, extended phrasing and deeply emotional musicality while violinist Calvin Wiersma’s extended solo in the third movement, "Velvet," was resolutely vigorous. 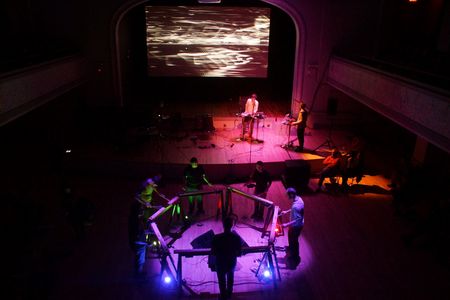 It is widely believed that a great work of art should be able to withstand reappropriation and reinterpretation, and, if possible, grow from the experience. This philosophy is often applied to plays, operas, and films, but rarely to instrumental music. On April 30, Ear Heart Music did just that, by presenting a re-mix of Michael Gordon’s monumental work for six percussionists, Timber. Mantra Percussion was joined at Roulette with a slew of guest artists, who responded to the original work, overlaying it with their music to create something wholly different.

Gordon’s Timber was co-commissioned and premiered by Mantra in 2011. The work in its original form calls for the ensemble of percussionists to play “simantras” (wooden 2 x 4s of varied lengths) arranged in a circle, for 75 minutes, with all members playing from memory. In this performance, the members of Mantra were arranged in the middle of the audience space, whilst the guest artists took to the stage.

An announcement before the concert explained that the audience should feel free to move about, so as to soak in the sights and sounds of this unusual cross collaboration. Interestingly, Gordon, who was in attendance, remained in his balcony seat throughout the evening, however many audience members freely roamed throughout the space.

Throughout the concert, avant-garde rocker Ian Williams, electro composer Ikue Mori, multi-instrumentalist Brandon Seabrook, and clarinetist/composer Jeremiah Cyerman, each took turns at responding to Gordon’s music, whilst Mantra pummeled away, creating a continuous wall of sound. Mesmerizing visuals from media artist and designer Joshua Ott added another element of heady stimulation to the concert. The projected graphics seamlessly shape shifted and pulsed along with the rhythms of the simantras.