Cadillac Moon Ensemble Prepares for Collaboration with Circles and Lines FoM: What is the relationship between Cadillac Moon Ensemble (CME) and Circles and Lines (C&L)?

Patti: We’re all friends. The whole collaboration is built off of this idea that we have this longstanding relationship with Circles and Lines that is very healthy and nice.

FoM: What were some of the overall goals you had for this collaboration?

Eric: One of the big things was completing the set; to put all of our voices that we have as a composer collective together on one program with all of us writing for a single group, I think that was the main goal of this.

Noam: It’s kind of like going to 7th grade prom—the composers' collective is on one side and the contemporary ensemble is on the other side and everyone’s like, “Man, I really want to dance with that person, but I’m really shy.” And so, we kind of broke that barrier and decided to go for it just to see what would happen.

FoM: CME, it’s an unusual grouping you have. What made you decide to come together?

Roberta: Well, we started in 2007. I’m the only original member. We started as a student group at Purchase College as a Pierrot ensemble plus percussion and then two of the players left school and we were left with this setup. We really liked the way it sounded, so we decided to go with that.

FoM: And C&L, what exactly is the purpose of a composer collective? What unites you?

Eric: There are different collectives that have different identities and got together for different reasons. The most famous one is Les Six in France and then afterwards there’s Bang on a Can…I think that those guys kind of have an aesthetic or an underlying philosophy that unifies them. But us, we got together at NYU. The original story of why we got together was that I had written this giant piece and I needed to fill out a program and I invited all these other composers onto the program. We all have really different sounds but it works in the sense of the collectivism.

Angelica: I think the unifying thing comes after. For example, we all write for the same ensemble and that’s kind of the unifying thing instead of it being the other way around with composers with a similar aesthetic writing for different ensembles.

Noam: It’s kind of like Captain Planet, except we don’t save anything.

FoM: CME, what were some of the advantages you found in working directly with the composers?

Meaghan: I think all of us sort of got into new music in some part because you actually get to work with the composers. When you’re playing a piece by Beethoven or Brahms, you have a certain amount of control over what comes out, but in the end you’re dealing with the whole baggage of performance practice. In working with living composers, especially if they’re writing the piece for your ensemble, you really have a role in that initial creative process. Also, just knowing where the pieces are coming from—people have musical personalities that relate to their actual personalities and when you know them you can play their music in a way that makes sense according to who they are as people.

Sean: To be able to work that closely with someone…it makes you feel a lot better as a performer—not having to be so worried; to have a direct connection to the composer and if something doesn’t work to be able to say, “Sorry. You should change this or it’ll sound bad.” It’s really nice because you never have to guess what people are thinking, you can just ask them. It’s a slightly more rewarding experience than just trying to interpret something written 300 years ago.

FoM: So, composers: what, then, are some of the things you’ve gained from working so closely with the performers?

Eric: If I don’t play an instrument, I can go and consult the performer and I don’t have to be sitting in front of the Samuel Adler textbook trying to figure it out based on these weird conceptualizations he’s written out. I mean, they’re not weird, but it doesn’t give you a whole picture of what’s possible and it doesn’t have a lot of extended techniques. You can really work closely with the performer and get exactly what you want in the best way that leaves everybody happy.

Angelica: As Meaghan was saying before, I think ensembles have their own musical personality. So in that way, instead of writing for violin, you’re writing for Patti, or instead of just writing for any combination of instruments you’re writing for this ensemble where you know the players and you know what they sound good doing and what brings the best sound out of them. It’s nice to write for something that specific.

FoM: CME, what are some of the technical challenges you face with such diverse instrumentation?

Patti: I feel like I have to play differently to play with flute. It’s not as easy! And then when [Roberta] plays different flutes, like alto flute, sometimes I’m just like, “Where do I put my pitches?” In general, I feel like it is a real challenge. People like to write violin and flute unisons and I’m just like, “ugh…” [Laughs]

Meaghan: Very often the cello and percussion will be kind of the rhythm section. So like, I’m playing a bass line and Sean is playing something that resembles a drum set thing, but on like 18,000 instruments that are much harder to play together than a drum set. So finding that kind of tightness and then also shifting between being a melodic figure and then a rhythmic thing with the percussion can be challenging.

Roberta: Also, every piece is different instrumentation because Sean plays every instrument under the sun and I play piccolo through bass flute depending on what composers ask for. So for each piece, finding the balance and imagining what it will sound like in a dressing room rather than an actual concert hall is challenging…but fun!

FoM: And composers, what were some of the challenges you faced in writing for CME?

Dylan: It’s just completely not a traditional ensemble. You don’t spend years in undergrad writing for flute, violin, cello, and percussion ensembles. It presents new challenges which most of the time are really fun—like balance and voicing and colors.

Eric: I feel like the opportunity for color in this ensemble is really, really huge. Whenever you have percussion, opportunity for color is really massive. I think one of the things I struggled with when writing for them was how to create a sustained, voluminous sound—something big that sticks around and is not an attack that decays immediately.

Dylan: I think that every challenge that the ensemble creates is a big opportunity since really there’s every section of an orchestra except for brass, so the colors are really vibrant for a quartet.

Angelica: For me, balance—not only in the sense of volume and density, but also in the sense of all the color possibilities. It’s kind of like a compromise with yourself, trying to balance it out and find what the piece really needs instead of just all the things you can do.

FoM: Contemporary music can sometimes be difficult for audiences. Is there anything you do to help unfamiliar audiences understand your music better? And what do you hope to pass on to your audiences?

Roberta: A lot of our composers are from New York, so we invite them to the concerts to connect as people and talk about their pieces. And sometimes, when we’re playing concerts for an audience who isn’t familiar with contemporary music, we’ll show some of the techniques first and talk about them before we play the piece. I think that helps quite a bit. And we tend to put a lot of diverse pieces on a program so there’s usually at least one or a few pieces that different audience members really like—or really hate—but, get attached to in one way or another.

Dylan: I think that new music is a really broad idea now. It’s not the ‘70s; we’re not all writing twelve-tone things that the general public can’t understand. It goes back to the diversity of our group—we’re all writing different things and I think there’s something that at least one of us is writing that audience members are going to be able to connect to.

Eric: You want people to become engaged and for people to want to reflect and have depth. We are not writing popular music or anything—I mean, people gain stuff from pop music, so that’s kind of a bad way to say it—but we just want people to engage like they’re eating meat and potatoes rather than eating candy.

Meaghan: I think even with really challenging stuff, if you find a way to frame it that’s human and personal, people are able to find a way in. One of the nice things with CME is that our programs have recently been based around a certain theme. The program we just did was called Dark Circus and we had a couple of really challenging pieces on there. But it was in this frame and I had the sense that people were more easily able to get into the really weird stuff, even more than the lighter, more ostensibly circus-y stuff, because it was in this frame of, “Ok, this is a crazy circus,” and new music is kind of a crazy circus. 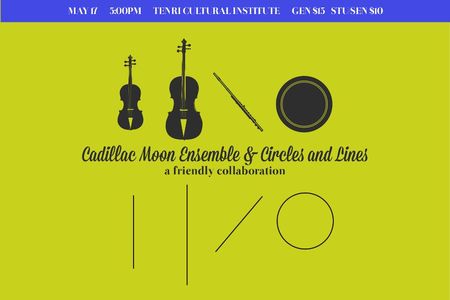 CME and C&L’s collaborative concert will take place on May 17 at 5PM at Tenri Cultural Institute. Tickets for the event must be purchased at the door.

Cadillac Moon Ensemble Prepares for Collaboration with Circles and Lines

FoM: What is the relationship between Cadillac Moon Ensemble (CME) and Circles and Lines (C&L)?

Patti: We’re all friends. The whole collaboration is built off of this idea that we have this longstanding relationship with Circles and Lines that is very healthy and nice.

FoM: What were some of the overall goals you had for this collaboration?