In Case You Missed It: Our Facebook Interview with Chamber Band 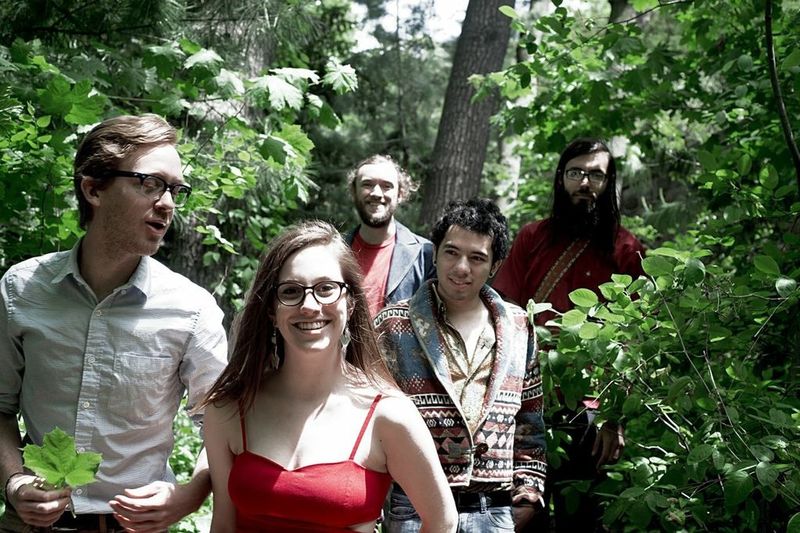 Last Thursday, I had the pleasure of chatting with Chris Littler and Ellen Winter from New York's own Chamber Band (along with some of their lovely fans) in advance of their midnight show at Spike Hill this week. After the break, check out an edited version of our live Facebook interview—complete with a few new questions I didn't have a chance to ask then.

Don't forget! We'll be doing more of these fun talks in the coming months, so be sure to check in with us here at FoM regularly—your favorite band could be joining us next.

Feast of Music: Hey everyone! We're chatting with Chris and Ellen from Chamber Band! How’s it going, guys?

Chris Littler: I’m writing it down verbatim. We’re at a coffee shop in Williamsburg—me and Ellen.

FoM: So how did Chamber Band come together? Where did you all meet?

Chris: It was a little like this: A bunch of random connections that led to a cohesive unit. This Facebook thread, I mean. Am I not being clear enough?

Ellen: We kind of connected through Sarah Lawrence. but I wouldn’t call us a Sarah Lawrence band. It was Chris’s brainchild but Sam, Asarr, and Allie nannied the brainchild. I like to think of Anthony as just this...you know...he’s like this cool uncle.

FoM: How’d you choose your name?

Chris: It made me laugh.

Ellen: It came to Chris in a dream. The huge dragon god, Io, spat fire on the chamber music.

Chris: You are being insane. I wanted something that sounded antiquated and was kind of ironic and not too pretentious; I’m not sure how successful I was.

Rebecca Steinberg (fan): Hey! Is there anyone you guys would love to collaborate with?

Chris: I think more than anything I’d love to work with Nigel Godrich. I think he’s produced more of my favorite albums than anyone else alive. He’s probably reading this. Hi, Nigel!

FoM: What are you listening to now that you find really engaging or exciting?

Ellen: I've been listening to a lot of Portishead lately. Their music is so haunting, like the melody just follows you everywhere. I love that. Also Daft Punk's latest album is dope. And John Coltrane. And Beck. All of them transport me when I listen, they create a world with their music and invite you in.

Chris: Agreed. Always Beck; always and forever. Ben Kweller, after a long absence—nostalgia-rock, I call it. And the soundtrack of our recent tour was Auditorium, which is this insanely great, insanely hooky band out of Los Angeles. I mean, every second of the songs gets in your head. You start to think something is wrong with you. And now that we're back in writing mode, I've been eating up the Dirty Projectors. I discovered them while we were recording and I was like, "No. You have to wait until we're done. Then we will be ready for you."

Stuart Littler (fan): If you had the choice between having one huge hit but no career five years later, or anonymity (for the most part) but a sustainable career over the long haul, which would you choose?

Chris: Yeah, what’s important to me is that I can provide for myself while making the music I want to make. It’s less important to me that there are a million people bobbing their heads to it.

Ellen: To have a sustainable career you have more of an opportunity to grow as an artist instead of clinging on to that one hit. You’re always challenging yourself to do better.

Chris: What would YOU choose for us, Stuart?

Stuart: Just keep up the good work! Fame has too many hassles. Although infamy...

Chris: Explain infamous. That’s like...more than famous, right? We were just texted a question from Jesse Swire who said YOU GUYS ARE THE ONLY NERD ROCKERS WORTH LISTENING TO. WHAT INSPIRED YOU TO SATISFY THAT NICHE?

Ellen: I think the coolest thing about Chamber Band is that, yes, we are categorized as nerd rock, but you don’t have to categorize yourself as a nerd to enjoy the music. You don’t need to play Dungeons and Dragons to get down with the dragon.

FoM: You have a show at Spike Hill coming up. Anything fans can look forward to? Anything the band is looking forward to, in particular?

Chris: Yeah, Spike Hill is a dream. We love them there. It’s such the perfection location, too.

Chris: I know I'm looking forward to it. Our producer/engineer/superstud Mike Flannery is joining us onstage again, which always adds that Flannery touch. It's just pure silliness, but not so silly that the audience gets embarrassed—or too self-aware. That'd be terrible.

Ellen: Oh God, that would be awful. Let's never let it get to the point of awkward self-aware silliness. Everyone would leave so uncomfortable. It will be our first show since the tour, so I'm looking forward to playing in New York again. The West Coast is chill, but New York is homey.

Brittany Wilson (fan): Hey, guys—do you ever wear costumes on stage or coordinate your outfits?

Ellen: We do have a palette that we try to follow: red, gold, blue, and grey. Most of all, I’d say...this going to sound so cheesy. If we aren’t coordinated in clothing, we’re coordinated in energy. It’s never boring.

FoM: Do you find it challenging to explain your Deities (re: DnD) to those that may not be familiar with the game?

Ellen: I didn’t play DnD until I joined the band and Chris explained it to me pretty well. I feel like if you have a fantastical imagination or any knowledge of dragons or heartbreak, you can grasp the concept.

Chris: We’re always toying with how much we want to explain the concept behind the album, whether or not we want the music to speak for itself. It’s hard, because there’s so much music out there that you kind of want to say, “Hey! Look at us! We’re different!” But now we’re realizing that we’re pretty musically different already, and we don’t really need to use the concept as a crutch to set us apart. It’s kind of just a nice bonus.

Stuart: Did the concept for the album come first, or after some songs had been written? Also, does having a concept help the writing process, or does it sometimes put you in a corner?

Chris: It was probably the easiest thing I’ve ever written. I know the world so well. It happened all very quickly. I’d written a bunch of the songs for a musical that I put on with some friends after college. So the melodies, the structure of the songs —they were already in place. It was a matter of putting the lyrics on them. It makes the writing process a million times easier. I need a box to be in. Once I know my confines, then I feel like I can make educated decisions as an artist. It also becomes this fun little game I can play: How can I make this thing I’m singing about fit in the language of the world? Should I?

FoM: I read in another interview that some of the songs were originally about former flames and sort of later took on the DnD patina. How did that come about?

Chris: I wrote from the heart. It's really hard for me to sing about something that doesn't affect me. I knew I had to write about what was heavy to me at the time which, blessed as I am, was a run of bad luck, relationship-wise. Mostly my fault, which you see in the songs. Then it was just a matter of figuring out which god I wanted to plead to, and the specifics kind of came in after that. I tried to stick to only the stuff I remembered from early games, and a little bit of the later canon. So it was all filtered through my fuzzy memory. I've since gone back to see how wrong I was about certain things, but you'll never get it out of me.

Ken Breese (fan): I love Chamber Band! Question, very quick, as I am actually playing Dark Sun tonight! So the end of "Sleep Charm" is killing me, it’s so good. Spill the beans: is that the beginning of a new song; are there new songs?

Chris: And we love you, Ken. The little coda at the end of "Sleep Charm" is just what it is. The song was done, and that relationship had come to the end of where it was. But the song didn’t feel finished. So I wrote that little ditty and tacked it on. People really love that thing. That’s me and Ellen there.

Ellen: It’s suggesting the new music that’s coming out of our collaboration. There are a lot of people on that album. I joined the band more recently. If anything, it was the beginning of a new adventure!

Katie Bainbridge (fan): What’s next after Deities? Will you stay in the world of DnD or move on?

Chris: I think we’re done with DnD. I think we had as much fun as we could in that world. You start to get diminishing returns, I think.

Ellen: There’s a lot of other worlds to explore...

FoM: What’s one big lesson—it could be anything—that you learned from writing and recording your first album?

Chris: There’s this weird factor that you don’t really think about when you go into the studio, and that is probably present on all your favorite albums, which is...I don’t know what to call it, but spirit. I wish Flannery was here to field this. If you don’t provide a good environment for everyone to record in, then the album won’t sound fun. I think we did a really amazing job of creating that environment. It kind of felt like a slumber party. It was recorded from 7 p.m.–4 a.m. So listening to it, to me, sounds like a slumber party. I guess the lesson is that you have to plan on having fun and then have fun or the album won’t sound fun.

FoM: Amazing. Very thoughtful answers! On that note, I think we can wrap things up here. I want to thank Chris and Ellen so so so much for being here, and I’m buying y’all a drink at Spike Hill. Thanks also to all the fans! Wonderful questions all around!

In Case You Missed It: Our Facebook Interview with Chamber Band

Last Thursday, I had the pleasure of chatting with Chris Littler and Ellen Winter from New York's own Chamber Band (along with some of their lovely fans) in advance of their midnight show at Spike Hill this week. After the break, check out an edited version of our live Facebook interview—complete with a few new questions I didn't have a chance to ask then.

Don't forget! We'll be doing more of these fun talks in the coming months, so be sure to check in with us here at FoM regularly—your favorite band could be joining us next.