In its second year, the The Global Citizen Festival transformed Central Park's Great Lawn on Saturday with great music and good vibes, aiming to raise awareness about the conditions of global poverty by bringing together world leaders, activists, and musicians for an evening of education and inspiration. The official lineup boasted Kings of Leon, Alicia Keys, John Mayer, and Stevie Wonder, but concertgoers were also treated to surprise appearances by Janelle Monáe, Bono, and Maxwell.

Unfortunately, there seemed to be a disconnect between the goal of the event and the means to achieve that goal. Kings of Leon played what felt like a standard set, with numbers off their new album, Mechanical Bull, none of which seemed to play into the festival's overriding themes of reform and equality. Alicia Keys thrilled the audience with her impressive vocal range and piano riffs, but did not speak much about the evening's cause, oustide a brief dedication.

Mayer's soulful performance of "Waiting on the World to Change" was an ironic addition to a concert about taking action, but his guitar solos and crooning were enough to make anyone disregard the oversight. Seeing the great Stevie Wonder was something I never thought would happen, and the music was as groovy and heartfelt as one would expect. His rendition of "Imagine" was prefaced with a speech about gun-control laws in the United States—slightly off topic, but no less serious an issue.

Overall, the Global Citizen Festival featured some great music and a large crowd of enthusastic concertgoers, but ultimately fell short of making the impact it intended. Finding like-minded performers to represent the Global Citizen agenda should be the main goal for next year's event; otherwise, it would be best to find another way to rally the troops. 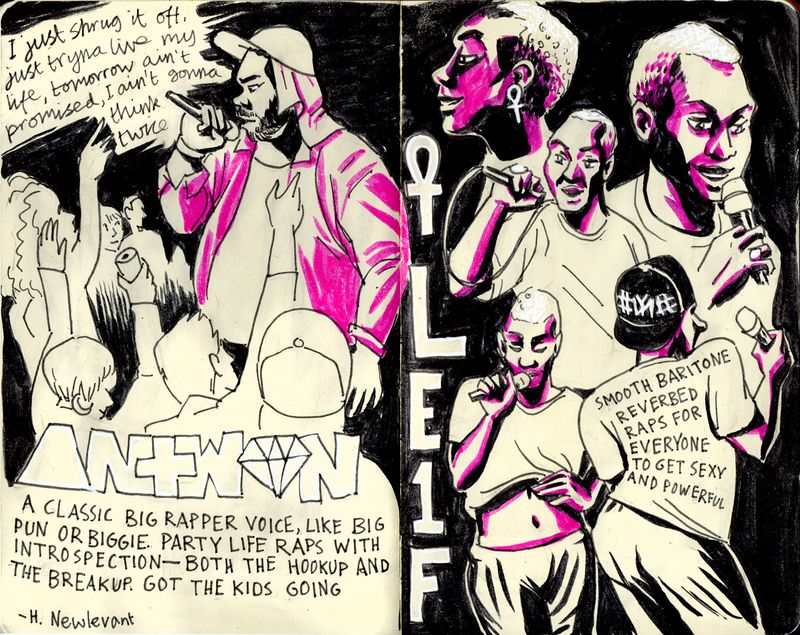 Our graphic artist Hazel made it out to Santos Party House Friday night to sketch out sets by MC's Antwon and Le1f (whose production credits include Das Racist's "Combination Pizza Hut and Taco Bell"). Check out more of Hazel's Concert Comix at newlevant.com.

"We Have An Anchor" Opens at BAM 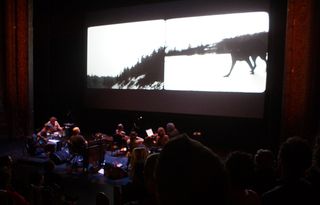 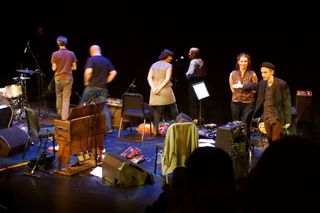 "It's not an improvised score, though I would hope it leaves the musicians room to move. I wanted them to make weather out of sound." — Jem Cohen