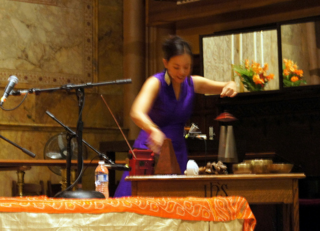 On Her "Day Job": While Ascension started as a job, it really has affected me in terms of how I think about performance, and music in general. I didn't understand it for a long time. I mean, I'm an experimental composer and musician. But, eventually, it became a grounding thing. It keeps my sightreading chops up, it keeps up technical skills. As a composer, I get influenced just by having to sing through all of this varied repertoire week after week that I wouldn't normally have access to: Palestrina, Hildegard von Bingen, etc. I can also tap into Dennis Keene's (Voices of Ascension's director) incredible expertise and ask him about how timbre or spatialization work.

On Musical Patronage: I was at a Bang on a Can holiday party a few years ago, and I had to leave to go sing at Ascension. And, someone made this very snarky comment: "Oh, you have a church job." I really didn’t know how to read that. When has music ever not been a part of the church or the state? These have always been the two primary backers of musicians. They have the money, yes, but they also understand music's ability to broadcast a message that would otherwise fall on deaf ears. Music's not just entertainment; it's an incredible language that if someone has mastery over, it's an enormous power. People who understand music's full dynamic power as a language are the ones who have really supported it financially over the centuries.

On Music's Universality: If you go through the hymnal, there are different chants and hymns for the different times of the day, different days or seasons of the year. And I find that to be really intriguing as a composer, because I understand that I compose radically differently in the middle of the night versus when it's the middle of the day. And I always wonder: What is it about times of day that we as humankind apparently have wired in us, no matter what tradition we come from? In Hindustani music, there's a sunrise raga, a sundown raga. There are melodies that only exist at certain times of the day.

On the Cyclical Nature of Music: New York Polyphony and I did a program a few years ago called "My End Is My Beginning," where we melded early music with contemporary music. It was all about tracing the cyclicality of time. Even though they were written centuries apart, side by side they shared the same devotional, transportive, transcendental quality. We keep revisiting the same side of the record, just several grooves in.

On Finding Inspiration to Compose: I really think composition is captured improvisation. It's what you hear in your head, and you basically just write it down. I think of composing like a photographer does: You are capturing what happens to come out of your portal. Ansel Adams wasn't a great photographer because he made those mountains. Ansel Adams was a great photographer because he happened to be at that vantage point, at that moment, with the perfect light, and he knew how to capture the image. Composing is about your ability able to capture the things that happen around you. It's not like I made this—though I guess, of course, it did come out of me.

On the Importance of Space: A lot of my work lives around sound and space, whether it's an actual architectural thing, or whether it's a sonically driven effect out of a particular melody or sound design. Music is successful if you can circulate the energy in the room, if you can get energy to move within you, within others. As a choral singer, I gravitate towards spaces that are acoustically interesting to sing in. There are all of these really old techniques that have been associated with choral music for centuries: like, half the choir sings from the balcony and the responsorial comes from the altar. It makes the performance more of a communal experience.

On the Inspiration for Sunken Cathedral: The album is a sonic journey through the chambers of a body. It's inspired by how the architectural features of a church fulfill certain functions: the pillars, the arches, the narthex. But, it's also about the binary of it: What lies beneath the surface? What is your blood saying that you might not even know you're saying? I compare it to Chinese medicine, where each organ holds a certain emotion: you hold your anger in your liver, your grief in your lungs, your joy in your heart, your worry in your spleen. Music can imply a space—it can tell you dimension, how large or tiny a chamber is. And, how you juxtapose different sounds to each other at different distances can also create a sonic surrealism, a dream state that isn't real but feels visceral and tactile next to your ear.

On Not Being Pigeonholed: I'm really excited about the time we're alive right now because for the first time in my life, it's like: Anything goes. I remember when I won the John Lennon songwriting contest back in my singer/songwriter days, and Ralph Jackson from BMI would ask me: "Bora, if we were to put your CD in a record store, what bin would we put it in?" And I would just shrug. Even back in music school, everyone would always tell me: No, Bora, that’s never going to work. You can’t put electronics with that kind of stuff AND do this. And, I was like: I don't believe that! I was a folk singer-songwriter/music conservatory/raver girl. And I believed that all three of those things together could make something really interesting. I think electronic music has a lot that it could lend to classical music. And, classical music has a lot that it could lend to singer/songwriter music and what people call "folk."

There is a way for all of that to live together. I don't know what that says about our era right now, but I'll take it.