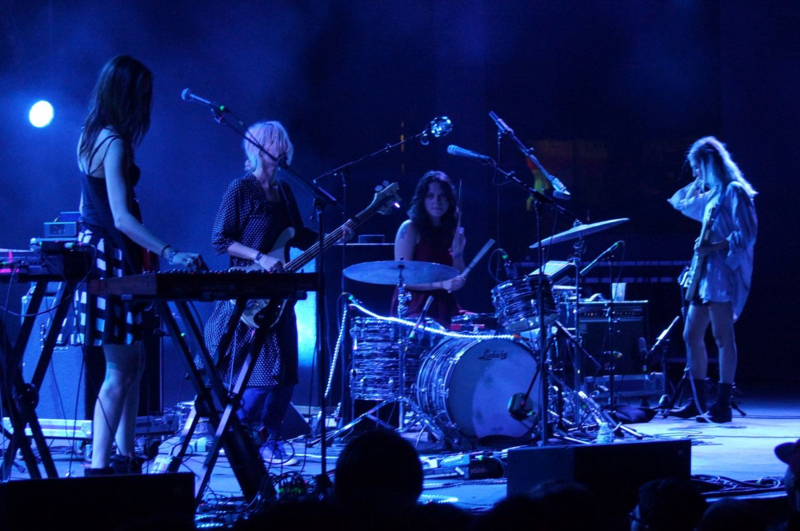 California rock outfit Warpaint made their way to Brooklyn’s Prospect Park on Thursday night as part of the ongoing Celebrate Brooklyn! series. Hearkening back to trip hop groups like Portishead and Massive Attack, with a sprinkling of 70s jam bands, they dove into a lush landscape of ambient experimentation--sparse guitars playing off of rich vocal counterpoint with bouncing bass behind them.

Jenny Lee Lindberg’s lockstep bass lines engaged with Stella Mozgawa's electronic snares, hi-hats and hip-hop beats to create a hypnotic low end beneath the ebb and flow of synths and vocals. Emily Kokal’s guitar jangled like that of The Smith’s Johnny Marr. Theresa Wayman and Emily Kokal’s mischievous vocals roared with remorse and purpose – especially on their hit song “Love is to Die.”

The group was preceded by local Brooklyn outfit, Yellowbirds, who offered up a number of twangy rockers in fits and starts. Their wistful brand of guitar-driven indie rock was slow at first, but managed to get the crowd moving a bit by the time they were done.

See more pictures below, or here for the full album. 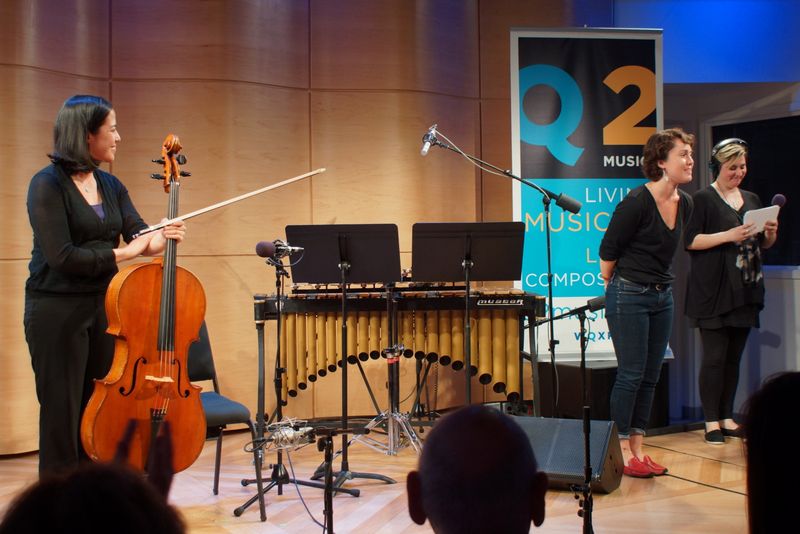 For the past two years, Q2 Music has been a bastion of new music in the barren wasteland of classical radio - even if it's the sort of radio you can only hear on the Web. Since it's inception in 2010, violist Nadia Sirota has been one of Q2's most affable hosts, leveraging her extensive knowledge of new music as well as her relationships with Nico Muhly, Judd Greenstein, ACME and others. Not to mention she's got a killer radio voice.

Now, Nadia has her own new show, Meet the Composer, which debuted this week with a podcast on the music of this year's Pulitzer Prize winner, John Luther Adams. Modeled after other production-heavy radio shows like Radiolab and This American Life, Meet the Composer aims to bring listeners into the minds and creative processes of some of today's most celebrated composers. Part interview, part personal essay, the show has been more than two years in the making, and is an obvious labor of love for Nadia.

To celebrate the launch of Meet the Composer - which is available both streaming and as a FREE podcast on iTunes - Nadia gathered her first five subjects at The Greene Space on Tuesday for a combination interview, performance, and party. Nadia herself hosted, and the room was packed with a mix of uptown and downtown types, many with beers or cocktails in hand.

Jungle Performs at The Wick in Brooklyn

All photos by Nick Fallon

With much anticipation for their debut album, set to release in a few weeks, UK outfit Jungle landed in NYC last week. After playing a sold out show at the Bowery Ballroom on Wednesday, the group played a suprise free concert on Saturday at The Wick in Brooklyn. Fans were able to RSVP for the show via the band's Tumblr page, offering a unique opportunity to see the up-and-coming group play in a Bushwick warehouse.

See below for more pics, or click here to view the entire album.

Continue reading "Jungle Performs at The Wick in Brooklyn" » 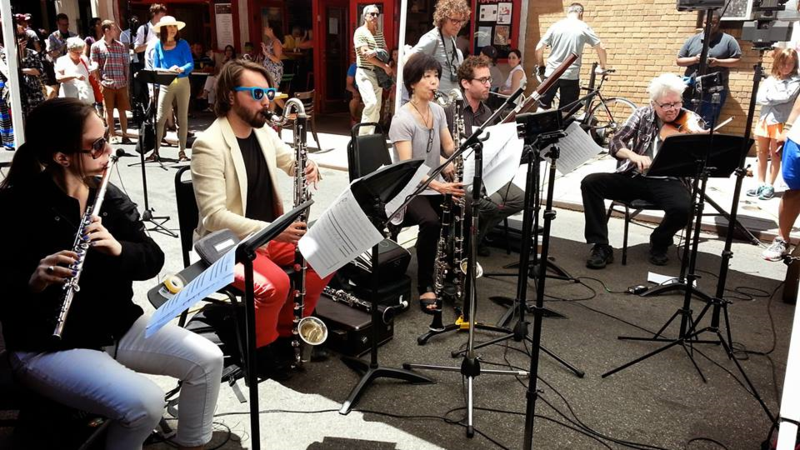 The longest day of the year was greeted in New York on Saturday with enough activity to tide people over well into the summer. Out on Coney Island, there was the Mermaid Parade; in Times Square, thousands flocked to do yoga. Whatever you did, it was a beautiful day to be out.

But, for my money, the thing to do this summer solstice was Make Music New York, with some 1,300 shows taking place throughout the five boroughs. Make Music NY first appeared in 1989, inspired by France’s Fête de la Musique. In 2007, the event resurfaced with a vengeance, focusing on site specific events and sheer quantity and accessibility to inundate the City with music.

With music literally spilling out into the streets of New York, I tried to cover as much of it as I could--though in the end, I ended up seeing only a small fraction. My journey began at 2pm outside of Greenwich Village's Cornelia Street Cafe. Composers Collaborative presented In (Key), a celebration of the 50th anniversary of Terry Riley’s iconic (or, depending on your point of view, infamous) ode to short rhythmic motives, In C. Riley’s 1964 response to the academic serialism of the time seemed well at home with the relaxed mix of minimalist super-fans, casual brunch goers, and nervous, out-of-their-element NYU parents.