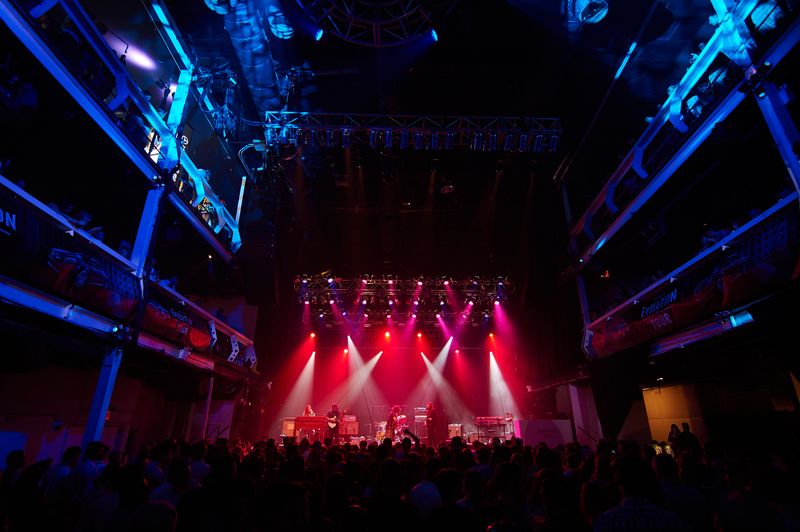 Last Thursday, the Mercedes Benz Evolution Tour kicked off its tour with their first stop at Terminal 5. Despite the brazen corporate sponsorship, concertgoers seemed to enjoy the wide variety of music on hand, ranging from Flag Golden Eagle's psychedelic rock, to DJ Questlove's pop hits, to the southern rock stylings of headliners Alabama Shakes. Throughout the night, the crowd was able to watch a live art show by Mr. Brainwash, who will be adding a new layer of paint onto the same Mercedes at every stop on the nine-city tour.

More info on future dates and acts here. More photos below and on the photo page.

John Luther Adams' "Sila: The Breath of the World" at Lincoln Center Out of Doors

Pulitzer Prize winning composer John Luther Adams, who moved from Alaska to NYC earlier this year, made a ritualistic offering to his new hometown Friday night in the form of a new site specific work for Lincoln Center's Hearst Plaza, a co-presentation of Lincoln Center Out of Doors and the Mostly Mozart Festival. In a preparatory note, Adams says that "Sila: The Breath of the World" - which was directed by Doug Perkins - was inspired by the Inuit term for wind, weather and other forces of nature. "It’s our awareness of the world around us," he says, "and the world’s awareness of us."

The performance, which lasted a little over an hour, featured 80 odd musicians situated in and around the plaza in between Lincoln Center Theater and Avery Fisher Hall. There were brass players on the grassy slope above Lincoln Restaurant, string players in the tree-covered rectangle next to the Met, and black-clad singers with megaphones wading through the Millstein Pool. The music was meandering and atmospheric rather than rigidly programmatic, encouraging a sort of trancelike listening where the instruments, wind, and the distinctive din of NYC all combined to create a hazy melange of sound. It was sacred and profane, spiritual and secular, quiet and majestic, all at once. I can't imagine experiencing it anywhere else. Lyricist Robert Hunter, formerly the silent member of the Grateful Dead, performed some of the Dead's iconic songs on July 23rd at City Winery.  (There's one more show coming up, on August 2nd.) More than a wordsmith, Hunter was integral to the band, particularly in their mind-bending, culture-changing early years. After facing some serious health problems a few years back, Hunter has hit the road, guitar in hand. He looks great, a lithe and youthful 73.

The concert had a definite arc: It started shakily and ended strongly. First number was "Box of Rain," and it was largely unrecognizable. Hunter was off-pitch, out-of-tune, and rhythmically uncertain. (Singing was never the Dead's strong suit, although Jerry Garcia's thin voice and limited range somehow suited the songs.) After a few minutes of agony, Hunter stopped, announced that he was in the wrong key, and started again. ("I'm playing with limited ability anyway, and I had to buy my own songbook to remember the lyrics.") It was a pretty frayed "Box of Rain."