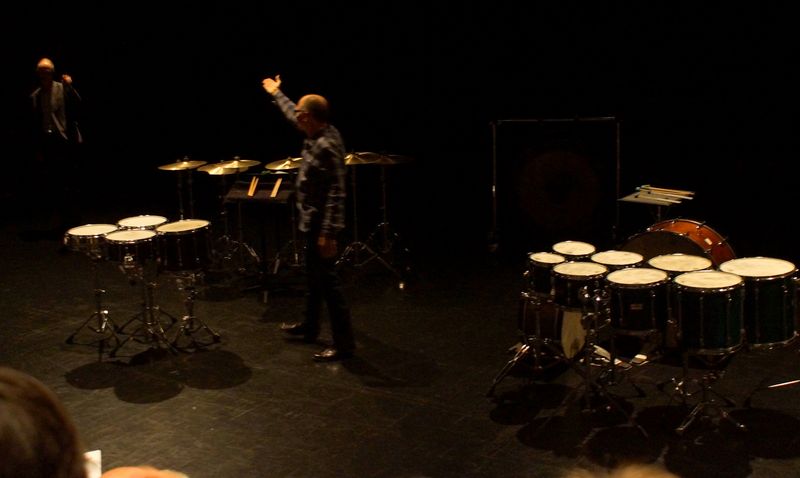 Among the orchestras, new music ensembles and violinists all taking part in this final week of Mostly Mozart, there was percussionist Steve Schick, who I first encountered during his Miller Theatre residency in January. As I remarked then, Schick is much more than just a talented musician: he is deeply committed to his craft, imbuing his performances with a transcendent, almost spiritual dimension.

Schick was back in town on Wednesday to perform John Luther Adams' The Mathematics of Resonant Bodies (2002): an unwieldy title for a work said to represent the “choirs of inner voices" hidden within the toneless instruments of the percussion family. As in January, Schick performed the entire 75 minute work - which Adams wrote for him - from memory, moving between seven different stations of percussion instruments. Aided by dramatic lighting that ranged from vibrant colors to near-darkness, Schick's playing was layered with simultaneous electronics, adding a supernatural "aura" to the proceedings. A bass drum rumbled like a terrifying thunderstorm. A giant gong resonated with the sanctity of a Buddhist temple. A rack of triangles mixed with electronics to produce a shrill, almost deafening peal. An air siren on slow-mo sounded like a propeller plane circling at low altitude. A row of cymbals cracked like the breaking of an Alaskan ice field.

Adams, whose Sila: The Breath of the World opened this year's Mostly Mozart and who won the Pulitzer Prize earlier this year for Become Ocean, seems to be having his moment, which he can now enjoy from his new home here in NYC. Unfortunately, New Yorkers will need to content ourselves with only occasional visits from Schick, who is ensconced on the west coast as a teacher, performer, and music director. Which makes appearances like Wednesday's, before an audience of less than 200 at the Clark Studio Theater, feel all the more miraculous. Come back soon, Steve. 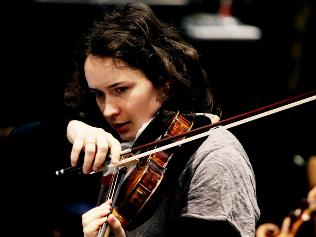 As if to provide a soundtrack to the lightning storm crackling just outside the windows of the Stanley H. Kaplan Penthouse last night, violinist Patricia Kopatchinskaja dug into the dark variations of Bach’s Chaconne in D minor from his Partita No. 2., part of Mostly Mozart's “A Little Night Music” series. With its candlelit tables and complementary wine, the experience successfully mirrors the experience of intimate downtown clubs such as Le Poisson Rouge and SubCulture, blurring the line between high art and cocktail culture.

Kopatchinskaja, known as something of a wild child - she performed last night without shoes - was surprisingly subdued and emotionally dry at the outset. Quiet parts of the Chaconne came across as tentative and without substance. The scales and arpeggios that make this such an rewarding work would have benefited from a slower tempo with cleaner phrases, rather than a flurry of notes all with equal dynamics.

Enescu’s "Menetrier" from Impressions d’enfance was played with minimal vibrato, perhaps in deference to Enescu’s own training by Gypsy violinists. But the harsh playing lacked romance, resulting in a rather staid performance.

Kopatchinskaja did finally exhibit the youthful exuberance she's known for with Bartók's Sonata for Solo Violin, BB 124. Written at the very end of his life, the finality of Bartók's music was reflected in Kopatchinskaja's performance, filled with tender moments whispered with a folk-like passion.

Despite the variable quality of Kopatchinskaja's performance, the excitement she's brought to concert halls around the world was evident during her encore of two short miniatures from György Kurtág’s Kafka Fragments, an ideal bookend to the Bartók. 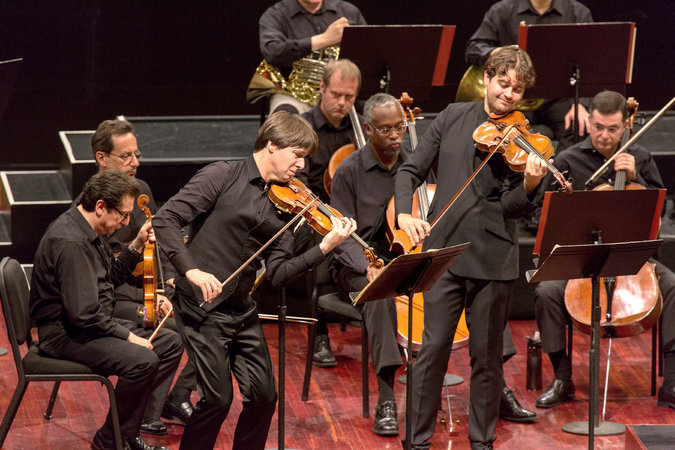 The Mostly Mozart Festival, now in its final few days, has offered NYC a variety of engaging programs this summer centered around core Classical repertoire. Such was the case this past Tuesday when David Zinman led the Mostly Mozart Festival Orchestra in a performance of the Eroica Symphony, alongside Mozart’s Sinfonia concertante for violin and viola and English composer William Boyce’s First Symphony, written in 1760.

Zinman’s approach to Beethoven is guided by strict adherence to the composer’s intentions, based both on the score and on recent scholarship. The result sounds fundamentally different from the rich, broadly phrased interpretations of, say, Herbert von Karajan. Zinman's Beethoven exhibits far more freshness, with brighter tempi and a striking attention to details.

All of this was on display in the opening moments of the Eroica, with Beethoven's use of sforzandi - an instruction to play a note with sudden, strong emphasis (literally "forcing" in Italian) - occurring on weak beats and in syncopated rhythms, creating a sense of awkwardly losing your balance. It’s funny and exuberant at the same time.

With the crumbling of New York City Opera last year and the recent labor-related histrionics from the Met, it would seem that opera in our fair city requires a different kind model. Cue Gotham Chamber Opera. The small company, known for its production of under-recognized operas from the Baroque to the present, enters its 13th season with eyes on the vacuum left by patrons abandoned by City Opera, or fed up with the Met.

Gotham opens their season with a double bill by 20th century Czech composer Bohuslav Martinu. The surrealist comedy Alecandre Bis tells the story of a man who decides to test his wife's fidelity by shaving off his beard and posing as his own cousin from San Francisco. Comedy on the Bridge tells the story of Josephine, caught in an existential paradox between two opposing armies, neither of which will allow her to enter their domain. It runs October 14-18 at the Gerald W. Lynch Theater at John Jay College.

December features a revival of Gotham's 2010 production of El gato con botas (Puss in Boots) at El Museo del Barrio. The opera is Xavier Montsalvatge's take on the classic story of a mangy feline with magical talents. Directed by Moisés Kaufman, the production features innovative Bunraku-style puppetry from London's Blind Summit Theater. The run will be from December 2-13.

Tickets and information on the rest of Gotham Chamber Opera's season available here.