Over the past half-century, West Africa has yielded an incredibly rich crop of musicians who have merged the indigenous music of the Griot tradition with rock, blues, and R&B, including Femi and Seun Kuti (sons of Fela), Salif Keita, Vieux Farka Touré, and, of course, Youssou N'Dour, who recently appeared as part of the ongoing Nonesuch at BAM festival.

Add to that list Malian singer-songwriter Rokia Traoré, who appeared at the Howard Gilman Opera House Wednesday night with her band for a two-hour set. Traoré, 40, had a serene, almost regal bearing, her hair cropped in an anrogynous buzzcut. Her voice wasn't particularly beautiful, but it did penetrate the haze of psychedelic cowboy electric guitars and lute-like Ngoni.

Traoré sang in three languages: her native French and Bambara, as well as English. When she wasn't accompanying herself on guitar, she danced around the stage in a Dervish-like trance, flowing along with the loungey groove. Most of the crowd stayed seated for the performance, save for one inspired audience member who approached the stage during "Mélancolie" (from Traoré's 2013 release Beautiful Africa) to do a traditional African dance while Traoré accompanied her in a seemingly endless torrent of lyrics. It was rapturous, transporting.

The King of African Music: Youssou N'Dour at BAM 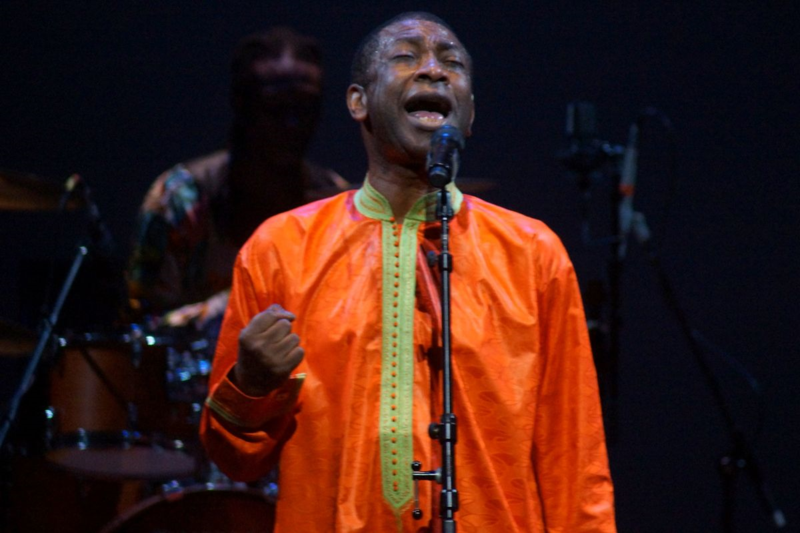 Continuing the ongoing panorama of music at the Nonesuch at BAM Festival, Senegalese superstar Youssou N'Dour performed to a pair of packed houses last week that turned the Howard Gilman Opera House into something resembling a revival meeting. Wearing bright orange and green kaftans, N'Dour charmed the largely expat African audience on Saturday with a 2 1/2 hour performance of mbalax songs from across his three decade career. His high, pure voice was carried straight up into the rafters by the members of his veteran band, Super Etoile. It was a concert, a call to arms, and a spiritual awakeneing, all at once. As his James Brown-style MC kept telling us, without the slightest bit of pretense: "He is the King of African Music! He is a minister of the people!," an oblique reference to N'Dour's recent appointment as Senegal's Minister of Culture and Tourism. From my vantage point in the midst of an ecstatic crowd of women dancing in heels and sequinned dresses, and men who threw dollars at N'Dour's feet like a religious offering, it didn't feel like much of an exaggeration.

WHY? Fills the Basement of (Le) Poisson Rouge 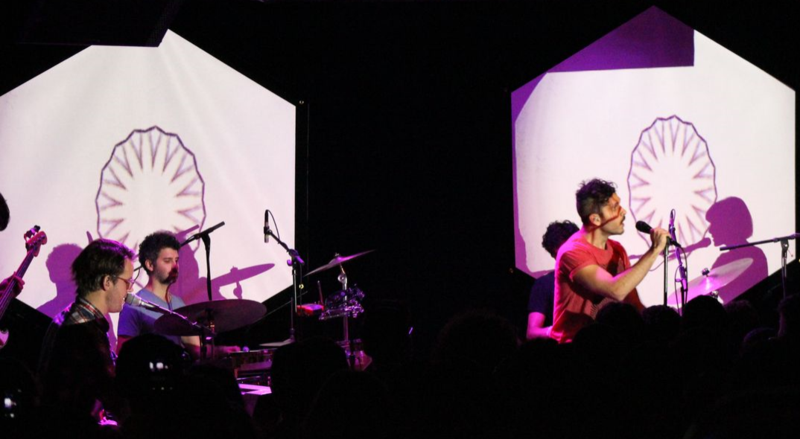 Cincinnati alternative hip-hop/indie band WHY? delivered a raw and charged display of musical emotion to the packed basement of (Le) Poisson Rouge this past Sunday. Opening was Minneapolis' Margret Wander, better known as Dessa. Leaning a bit more on the rap side of the indie hip-hop equation, Dessa showed herself to be a true wordsmith.

At times perverse, deftly perceptive, and always wrapped in meticulous arrangements, WHY?'s lyrics are poetic and haunting, painting an intimate portrait of both the loner and radical aspects of ourselves. In some respects, I wanted to compare frontman Yoni Wolf to Zack de la Rocha of Rage Against The Machine, but Wolf crafts a picture book with words, rather than provide the script to a political protest.

WHY?'s music contains layers of nuance that are brimming with complexity but never overbearing on the ears. Drummer Josiah Wolf (Yoni's brother) set the tone early with a heavy beating introduction to "The Fall of Mr. Fifths" off their 2008 album Alopecia, while guitarist Doug McDiarmid and Liz Wolf bolstered the band's broad style. Next came "Strawberries" off of their latest full-length album, Mumps, Etc. Interestingly, WHY? decided to forego playing anything from their last two EPs, opting instead to focus on their hits. They ended with a two-song encore, including personal favorite in "By Torpedo or Crohn's," leaving this listener in an odd state of pure bliss.

Continue reading "WHY? Fills the Basement of (Le) Poisson Rouge" » 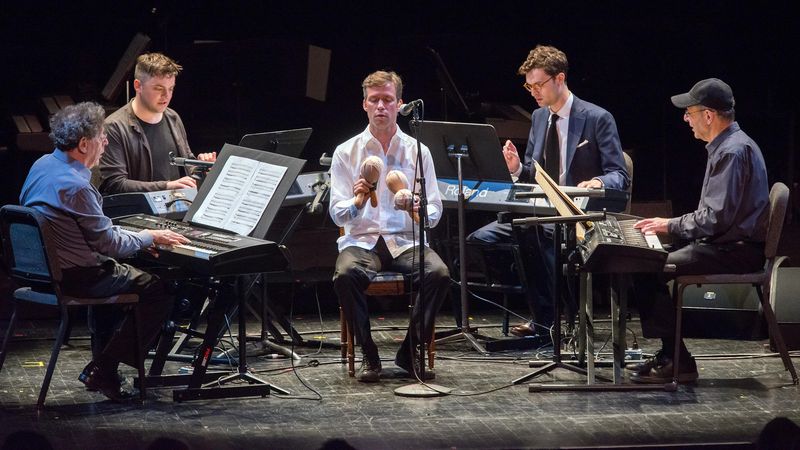 Two weeks ago, Philip Glass and Steve Reich - by any measure two of the most important and influential composers of our time - kicked off the Nonesuch at BAM festival by sharing a stage for the first time in decades, along with their respective ensembles. Over three concerts at the Howard Gilman Opera House, they performed music from across their fifty-year careers, neatly paralleling Nonesuch's own 50th anniversary.

On Tuesday night, the stage lights came on, and there sat both Glass and Reich, both at electronic keyboards facing each other. They were joined by fellow keyboardist/composers Nico Muhly and Timo Andres, with percussionist David Cossin sitting square in the center. They soon launched into Reich’s Four Organs (1970), which incited a near-riot at its Carnegie Hall premiere in 1973. In typical Reich fashion, the piece is built from deceivingly repetitive musical ideas: the shrill, long organ tones gradually shift in frequency over time, while the steady shake of maracas keeps time throughout. Watching the keyboardists' hands, it was apparent that they were each playing very little.

The genius in Philip Glass' music is that despite repeating ideas over and over, the music actually evolves a lot -- it simply chooses to do so over a long period of time. Glass himself has famously rejected the term “minimalism” to describe his work, instead describing it as, “music with repetitive structures.” The Cologne section from Civil warS (1984) was classic Glass: sweeping and pulsing musical ideas, twinkling, fantastical sounding synthesizers, with epic horn stabs over the top. Often, a performance of Glass’ music is like running a marathon, requiring real endurance on the part of the performers. Here, the musicians provided more than the necessary stamina, with only the occasional break for a sip of water.