"The Death of Klinghoffer" at the Met Opera 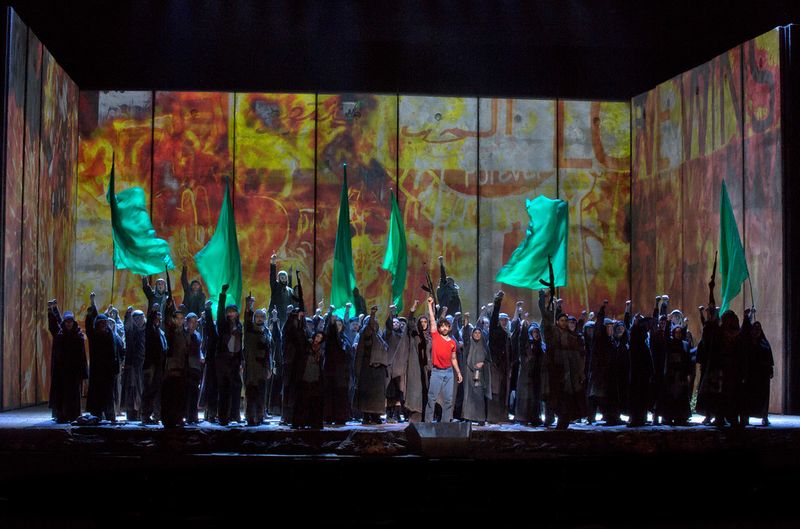 "There aren't many things left worth fighting for in this world. Art is one of them." - FoM

In his 2008 memoir, Hallelujah Junction, John Adams devotes an entire chapter to his opera The Death of Klinghoffer, which he completed in 1991 just six years following the event on which it's based: the hijacking of the Italian cruise liner Achille Lauro and the murder of retired American businessman Leon Klinghoffer. Adams writes:

"I knew that this subject would inevitably be a hot potato and likely draw us into any number of heated controversies with all sides of the Middle East conflict. But I found myself instantly drawn to the story, principally because the murder of this man, Leon Klinghoffer, possessed a strange, almost biblical feeling. On the one hand...it had the nervous, highly charged immediacy of a fast-moving media event. On the other, the man's murder, played out against a background of impassioned claims of Jews and Palestinians alike, touched a nerve that went deep into the body politic of our lives as comfortable, self-satisfied Americans."

Adams makes no attempt to mask his view that the Palestinian cause has been under and/or misrepresented in this country, where any debate over Israel's treatment of the Palestinians over the past 60 years is often "short-circuited by charges of anti-Semitism." At the same time, Adams embraces the "unique moral status" granted to Jews by virtue of their millenia-long suffering and courage, particularly in the last century.

Point being: while Adams insists that he and librettist Alice Goodman made no deliberate attempt to be evenhanded in their approach, both sides get their due in this opera. Which has in itself proven sufficient to spark repeated outrage in the American-Jewish community at staged and concert performances of Klinghoffer over the past 23 years. In a special note inserted into the Met program, Leon Klinghoffer's daughters Lisa and Ilsa write:

"The Death of Klinghoffer presents false moral equivalencies without context and offers no real insight into the historical reality and the senseless murder of an American Jew...Terrorism cannot be rationalized. It cannot be understood. It can never be tolerated as a vehicle for political expression or grievance. Unfortunately, The Death of Klinghoffer does all this..."

Continue reading ""The Death of Klinghoffer" at the Met Opera" »

Our old friend Ljova was showing off his conductor chops in Bryant Park recently, leading a varied group of NYC subway musicians via FaceTime, connected through the MTA's Wi-Fi system (coming soon to a station near you.) Mixing everything from African Djembe to a musical saw, the music is as light and airy as the subway...well, isn't. You can watch the results above, or listen to a high-res audio file here. Last Thursday's CMJ Music Marathon showcase at the Bowery Ballroom featured four very different bands, united by their love of Rock. Openers Slothrust was formed at Sarah Lawrence College in 2010. Lead singer Leah Wellbaum has a voice that should earn her a lot of attention: she can rock out, she can scream, but she can also be quite funny the way she deadpans lines. When she pulled her blonde hair back, she looked like a fresh-scrubbed farmer's daughter, with a playful, teasing look in her eye. But most of the time, she preferred to drape her hair over half of her face, like an introverted middle schooler skipping school to smoke and ride in cars with high school boys. Other times, when she wasn't smiling, there was an almost dark, faraway look in her eyes—like the distant stare of shell-shocked soldiers.

All of these looks were reflected in Slothrust's music, much of which came from their new release Of Course You Do. (My favorite opening line was: “I’m going to leave you anyway”, from "7:30 AM.") With a background playing jazz and blues, there is confident musicianship underneath the band’s surface grunge. Their cover of The Turtles' relentlessly cheery "Happy Together" started off faithfully before the music suddenly got dark, the guitars started to growl, and Wellbaum started screaming. Sunny and innocent love turned into nightmarish and uncontrollable need. And then just as suddenly, the band was all happy again.