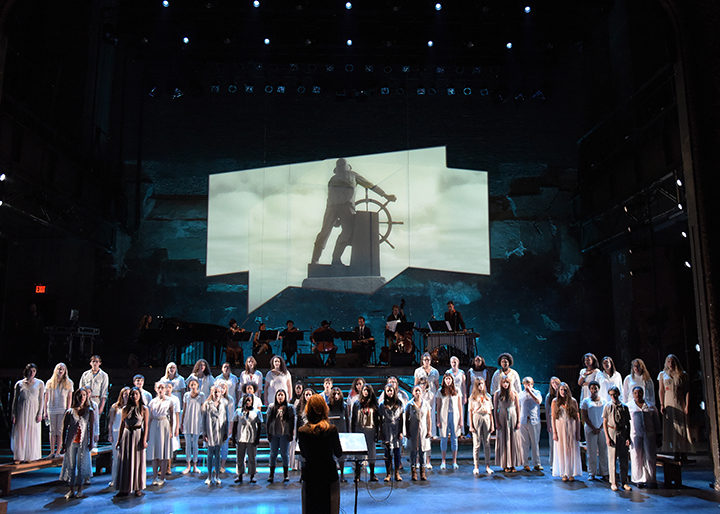 The Brooklyn Youth Chorus enjoys a solid go-to reputation in the city’s classical music world, frequently singing a supporting role in choral works by Mahler and Britten with the New York Philharmonic. At the same time, showing off their range, BYC has sung alongside pop giants like Elton John, John Legend, Alicia Keys, and Brooklyn’s own Barbra Streisand.

But with Black Mountain Songs, developed over the past three years, and presented in four performances this week at the Brooklyn Academy of Music’s Harvey Theater, the BYC, under the direction of its founder Dianne Berkun-Menaker, steps out front as the star of the show. Black Mountain Songs was co-curated by Bryce Dessner and Richard Reed Parry, and includes songs from both of them, as well as from such notable contemporary composers as Nico Muhly, Caroline Shaw, John King, Aleksandra Vrebalov, Jherek Bischoff, and Tim Hecker.

Black Mountain College was a progressive arts school in North Carolina operated from the 1930s to 1950s, with an impressive roster of teachers and students such as Merce Cunningham, Josef Albers, Cy Twombly, Robert Rauschenberg, Arthur Penn, Charles Olson, Robert Creeley, Buckminster Fuller, John Cage, and Willem de Kooning. This show celebrates and explores the free-wheeling, collaborative spirit of inter-generational creativity that made the school such a magnet for so many influential artists, dancers, musicians, and writers in mid-twentieth-century America. 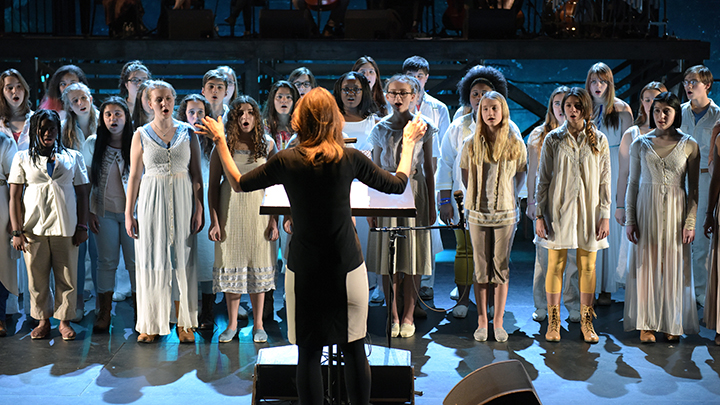 The guiding aim of the show from the start was not to present a historical account of Black Mountain College in song form. You leave the theater knowing no more about the college than when you went in. But your curiosity is sure to be piqued as to why this small mountain college in the South, which closed almost 60 years ago, should so inspire some of the top lights in today’s new music, classical, and rock worlds. Other pieces are linked more in spirit. “Bubbles,” for example, by Serbian composer Vrebalov, uses the poem “The Language” by Robert Creeley as an exploration of the ephemeral nature, and difficulties, of expressing oneself.

The success of any song cycle like Black Mountain Songs rests mostly on its unity, but often there are pieces that transcend the concept. Among the standouts here are Caroline Shaw’s “Its Motion Keeps,” which uses the words (but not the melody) of a traditional church hymn from the 1830s, and Richard Reed Parry’s “Their Passing in Time,” which brings the performance to a foot-stomping, hand-clapping climax.

Less successful are attempts to make Black Mountain Songs a multimedia extravaganza. Old photographs and snippets of film are projected on a trapezoidal screen hung above the stage, but who are these people, and where are these places? Likewise, two dancers seem to be yearning for something in their dances, but it was not clear what. Basil King, a Black Mountain alum now living in Brooklyn, was the narrator, offering brief commentary between songs. 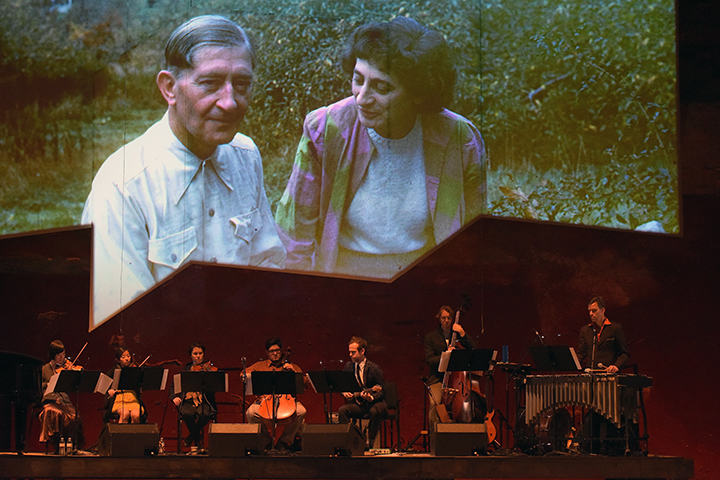 But in the end, Black Mountain Songs was all about the singing. Listening to these young voices, whether all of them at once or in smaller chamber groups, was an experience at once delicate, rousing, and sublime. It was easy to get carried away in the pure dynamic beauty of their sound. At times they achieved an elegant airiness, like a meringue, and at other times their collective voices were a ferocious roar.

Black Mountain Songs succeeds in its aim by actively practicing the spirit of collaborative creativity that Black Mountain College embodied. The students and teachers celebrated in these songs would be proud that their spirits live on.

"Aida" at the Metropolitan Opera 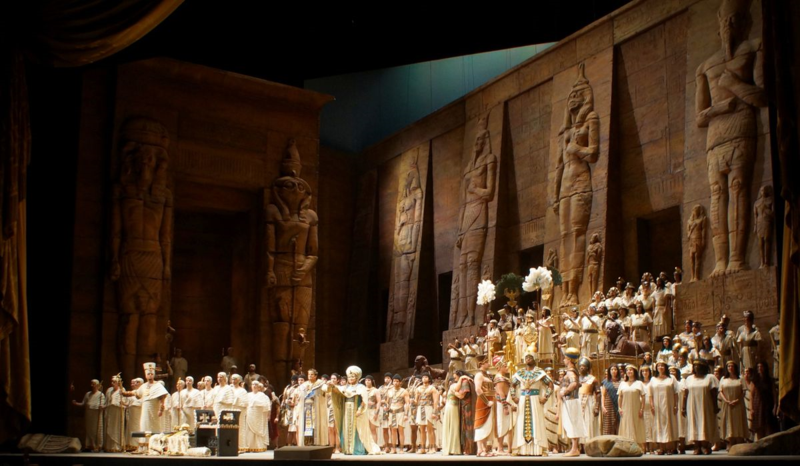 Whenever I get the chance to go to the movies, I usually opt for indie flicks or foreign films. But, every once in awhile, I enjoy a big Hollywood blockbuster. (I mean, who doesn't?) Same goes for the opera, where, after taking in the Met's production of The Death of Klinghoffer (twice), I wanted to see something a bit...bigger. As in: Verdi's Aida, which somehow I'd never managed to see before this past Wednesday evening.

One of the staples of the Met repertory, this was the 1,138th Met performance of this warhorse, which Verdi wrote in 1871 for the then-new Khedival Opera House in Cairo. Set in Ancient Egypt, the opera tells the story of a love triangle between Amneris, the Crown Princess of Egypt, her Ethiopian slave, Aida, and the military commander Radamès, who is in love with Aida. Unfortunately, Amneris is also in love with Radamès, and when the Pharaoh asks Radamès to take up arms against the Ethiopian army - well, let's just say things gets messy.

There is nothing subtle about Aida. In addition to massive choruses, numerous ballets, and a cast of what seems like thousands, the opera has six key roles, each with its own unique set of demands. Chief among those is the title character, sung here by the Ukranian soprano Liudmyla Monastyrska, who made her Met debut in this role in 2012. Monastyrska, who performs this season at the Vienna State Opera, Covent Garden, and the Staatsoper Berlin, among other houses, sang with both fearsome intensity and heartrending tenderness. 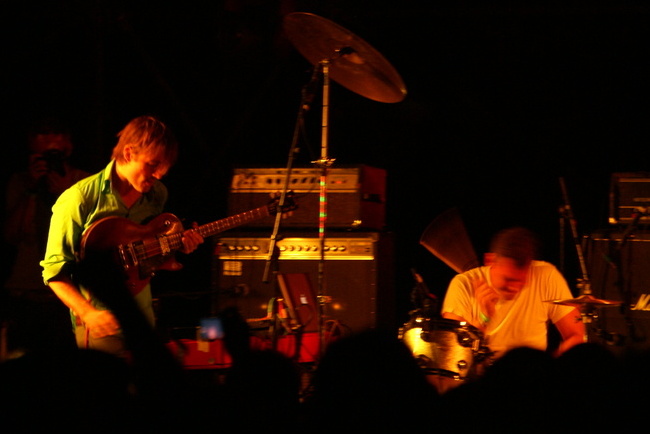 Way back in 2007, at the 2nd Fun Fun Fun Fest, I had this to say about my first experience seeing Battles:

"The NYC outfit, founded by former Don Caballero guitarist Ian Williams in 2005, is as close to experimental/new music as anything I've heard within a rock idiom. Elements of minimalism were prominent throughout the intense noise, especially in the incredibly complex, multi-layered rhythms. (At one point, I swear I heard a Balinese gamelan.) These guys are so good, I wouldn't be surprised seeing them on one of the Carnegie stages someday."

Close enough: Ian Williams makes his Carnegie debut this Friday with the world premiere of his first-ever work for orchestra, Clear Image, with the American Composers Orchestra. (Tickets and info here.) About the piece - which is being described as "raucous" - Williams, who will perform live electronics alongside the ACO, has this to say:

“If you consider a multi-track recording where the music actually isn't played, but just assembled, to be a lie, or an illusion, but you don't think that's actually a bad thing, then you might want that artificial quality and consider it an ‘enhanced’ reality. How then would you preserve that improvement in music that is to be played by real musicians in real time and space?”

I had the chance to sit down over a beer with Williams last week to discuss his compositional process, his influences, and what's happening with Battles these days. Highlights from our chat below.