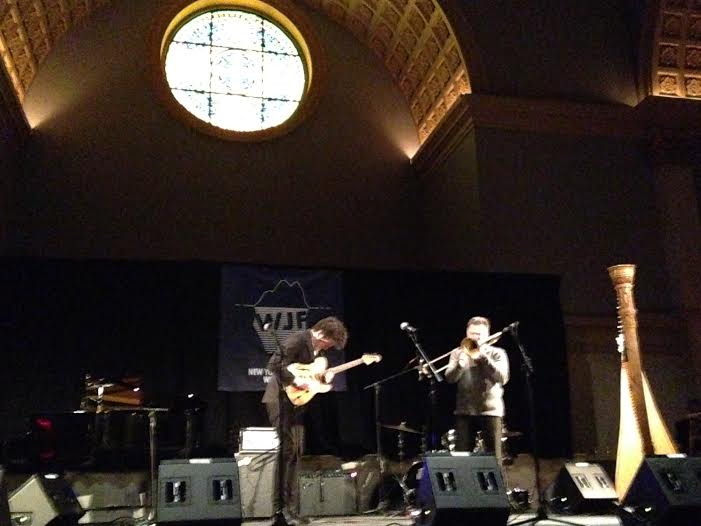 The Friday portion of the 2015 Winter Jazzfest, with a temperature of 17°F before windchill, was the coldest in WJF history since the inaugural festival (when it was -2°F). Not that this, in any way, impeded the festival's popularity. This year's festivities, which expanded to an unprecedented 10 venues, were so well-attended that the organizers instituted a live-update system of how crowded each venue was at any given time. (Running joke of the night: "You'll never get into Zinc Bar.") The surging popularity indicated that the goals of the festival - to have as many people as possible experience new and improvised music - were pretty much guaranteed to be met.
WJF is like the Comic Con of creative music, offering a chance to preview new groups from familiar artists that haven't released records and/or hit the clubs yet. Arturo O'Farill's "Boss Level Septet," which appeared at SubCulture, represents the leading edge in Latin-inspired creative music. The septet's music came from the same place as rhythm-oriented artists like Dafnis Prieto or Steve Coleman, but much of the music was knottier, more bombastic - almost zany in a controlled way. Much like Miles Davis adding Bill Evans's impressionism to 50's cool jazz, O'Farrill's sonic ace card came in the form of guitarist Travis Reuter, whose liquid, effects-drenched sound, plus his unique sense of harmony, propelled the music forward and sideways. The collective O'Farrills are no slouches either, with pianist Arturo taking a wide-ranging, Horace Silver "play everything" stance, and the marvelous trumpeter Adam O'Farrill finding himself somewhere between Freddie Hubbard and Peter Evans.
Trumpet sage  Ingrid Jensen performed alongside keyboardist Jason Miles at Judson Church for another yet-to-be recorded project, "Kind of New", which borrows directly from the Bitches Brew-era Miles Davis tradition. Jensen was more than prepared to take this role on - she had the same blistering upper register, used almost more as an effect rather than part of a melodic sequence. Of course, Jensen - as well as her tenor sax compatriot Jay Rodriguez - had more than enough door-breaking melodic chops to up the energy. Kind of New's music was like Woody Shaw and Bill Withers jamming in a desert - a meeting place of alternately breezy/serious 70's soul vibes existing alongside explorations of shapes and intensities.