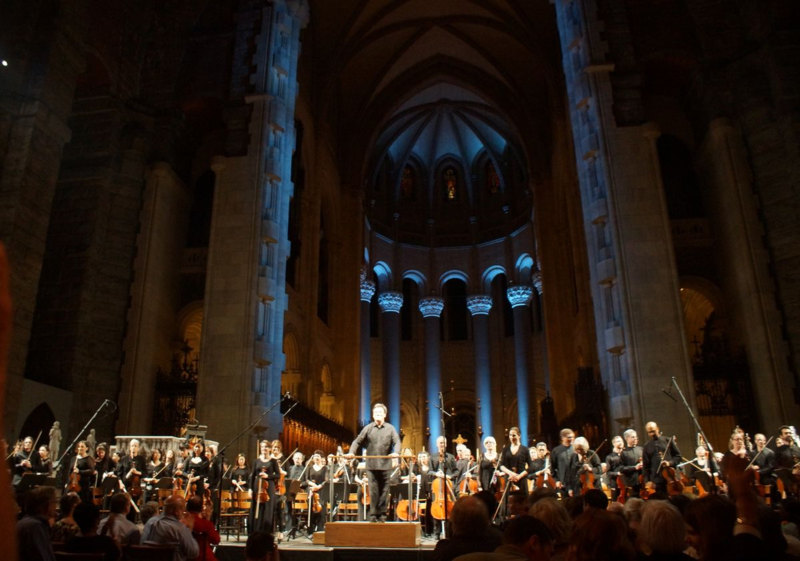 I will never forget the first time I attended the New York Philharmonic's annual free Memorial Day Concert at the Cathedral of St. John the Divine. It was 2001, and Kurt Masur - who began the tradition in 1992 as a gift to the people of New York - led the Phil in Sofia Gubaidulina's dark and eerie Two Paths (1998), featuring NY Phil violists Cynthia Phelps and Rebecca Young. That was followed by the most astonishing performance of Bruckner's 4th symphony that I have ever heard, with Bruckner's grand crescendos echoing throughout the imposing, inspiring interior.

It took me 14 years, but I finally returned to the Cathedral last night for the free Memorial Day concert, the 24th annual. Music Director Alan Gilbert led the Phil in an intense, almost severe program that included Beethoven's Egmont Overture and Shostakovich's 10th Symphony: a work of "concentrated fury" which he wrote in the wake of Stalin's death in 1953. Sitting relatively close to the stage, it was difficult to appreciate the full grandeur of the Cathedral's interior, but the sound was much less muddy than the last time, when I sat towards the back. The Phil, who've recently returned from a three week European tour, sounded sharp and on their game.

Last night's concert marked the unofficial kickoff of the Phil's summer season, which moves outdoors in a couple of weeks with the 50th(!) annual free Parks Concerts in all five boroughs. More info on the Phil's website.

It's still a couple of weeks until Celebrate Brooklyn! officially kicks off it's 37th season at the Prospect Park Bandshell, but the folks at BRIC are already warming up the crowd with a series of free Thursday night dance parties at Brooklyn Bridge Park. Last night's headliner was British soul singer Jamie Lidell, who last played the bandshell in 2013. After Lidell played a high-energy set with his own band, the park nearly exploded when he brought out Cincinnati youth dance group The Q-Kidz and openers the Brooklyn United Marching Band, filling the stage with high kicks and brass blasts. Not a bad way to spend an unseasonably cool night on the water.

There's one more dance party next Thursday featuring the latin grooves of Poncho Sanchez and DJ Bobbito Garcia, followed by the official opening of Celebrate Brooklyn on June 3rd with the legendary Chaka Khan. More pics on the photo page.

A Celebration of the Composer with the American Composers Orchestra 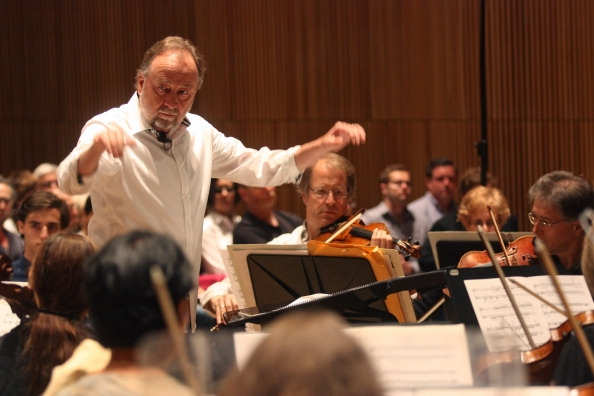 Organizations that further the careers of young composers are plentiful these days, but the American Composers Orchestra takes its support a step further with its Underwood New Music Readings, offering a rare peek behind the curtain of what it takes to bring a new orchestral work to the stage. Seven new works - chosen from hundreds of entries - received a run-through last Thursday evening at the DiMenna Center for Classical Music, with George Manahan conducting the ACO.

Sitting just in front of the seven composers were several “mentor composers,” including ACO artistic director Derek Bermel, Gabriela Lena Frank, and Kevin Puts. Despite casual dress from the orchestra and the educational setting, much was at stake: one of the composers was to be awarded a $15,000 commission to write a work for the ACO, to be performed next season.

This being a working read through after just one rehearsal, the performances were far from polished. That said, there were certainly some noticeable trends - most notably, the lack of dense, serial music à la Schoenberg or Pierre Boulez. Despite the occasional odd rhythmic turn or timbral innovation, the works leaned heavily toward late Romanticism and Impressionism. 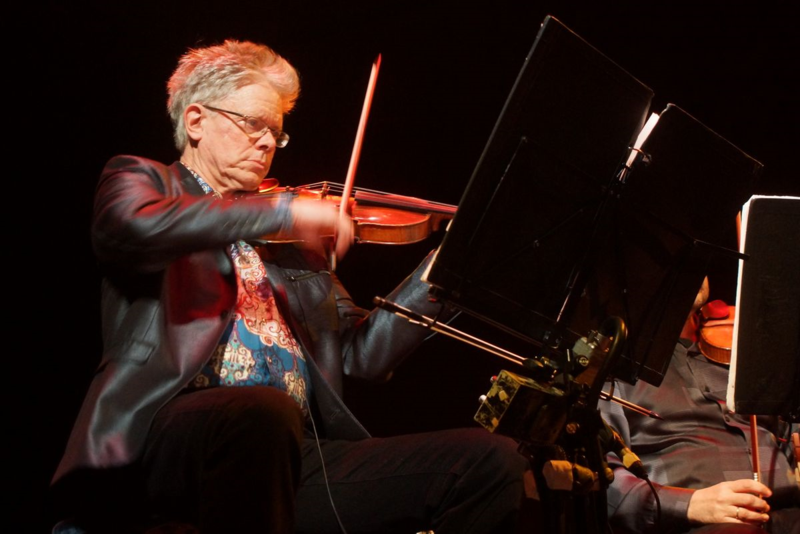 For anyone who cares at all about the living art of music, there is no more vital institution than the Kronos Quartet. Since their founding 41 years ago, this indefatigable quartet has commissioned more than 850 works and has performed more than 8,000 concerts around the globe.

Kronos is in NYC this week for a pair of shows, including Mary Koyoumdjian's Silent Cranes at Roulette tomorrow (5/12) - part of their Under 30 project - and a collaboration with the students of Face the Music - including a world premiere triple quartet by Danish composer Pelle Gudmundsen-Holmgreen - at the Queens New Music Festival on Wednesday (5/13).

Somewhere in between the Kronos Quartet's seven performances at the Big Ears Festival in Knoxville back in March, I had the chance to grab founder and artistic director David Harrington to talk a bit about Kronos' legacy, as well as some of the exciting things on the horizon. Chief among these is their ambitious Fifty for the Future project for Carnegie Hall, in which they will commission no fewer than fifty new works over the next five seasons. Excerpts from our conversation below.