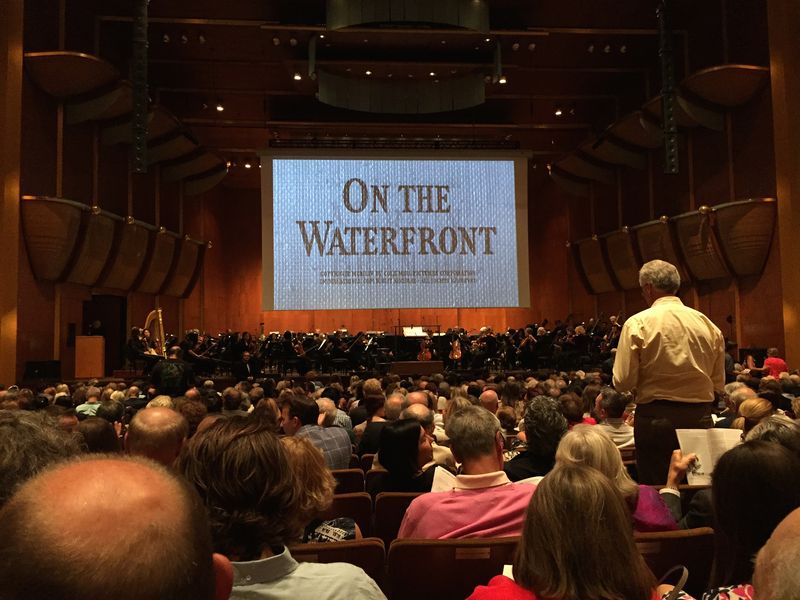 The themes and motifs from many famous film scores are undeniably and inextricably linked to much of our pop culture. It's hard not to hum the "da-dums" from Jaws when swimming, or the triumphant trumpets from the Superman theme when playing in the backyard as a kid.

That said, the film score so often goes unnoticed, even in beloved films. And generally, this makes sense. The score's purpose first and foremost is not to draw attention to itself, but to highlight the emotion and atmosphere of the action onscreen.

When the New York Philharmonic performs a film score live along with a film, you can imagine that these dynamics must change, considerably. Especially when it's former Phil Music Director Leonard Bernstein's only film score, On the Waterfront, which they performed this past week at Lincoln Center to a packed house as part of their "The Art of the Score" series. Film composer David Newman guest conducted.

Attending a live film score performance is a bit like attending two simultaneous events, and requires a bit of open-mindedness to fully enjoy. Once adjustments are made though, it definitely works. First and foremost, accept that the newly-renamed David Geffen Hall was designed for live music, and not for playing films. As such, the film sound from the speakers reverberated and bounced around the hall, making the clarity of dialogue a bit of an issue at times. Secondly, the balance of sound is not that of a film -- the orchestra would often play at a much higher volume than the film sound, drowning out any dialogue. These small issues, however, were far outweighed by the joyful benefits that only a live concert experience can deliver.

The Milk Carton Kids at The Town Hall 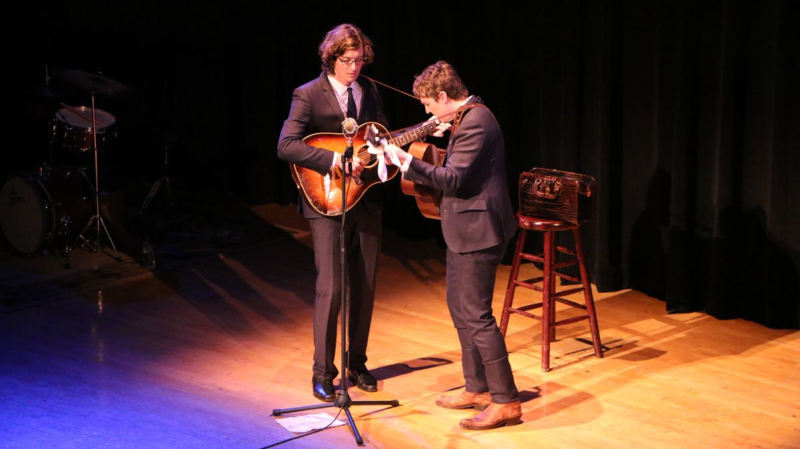 Though it's hard to make a concert hall that seats 1,500 people feel intimate, The Milk Carton Kids succeeded in doing just that at The Town Hall on Friday, with nothing more than a single microphone and two road-worn acoustic guitars. Indeed, it felt like the folk duo, consisting of Joey Ryan and Kenneth Pattengale, wasn't performing at all but rather just hanging out with some friends on a Friday night.

Ryan took every opportunity to tell stories full of punch lines, playfully joking that his infant son looked nothing like him (and that he was starting to wonder if he was actually the father), or rambling on about his visit to “Escape the Room NYC"; Pattengale joked that ‘they would have this part of the show together by next time.’

But when The Milk Carton Kids weren’t telling funny anecdotes, they were singing beautifully constructed vocal harmonies and strumming harp-like guitar chords, channeling the energy of all of the folk legends that had performed on this stage before them, notably Bob Dylan, Judy Collins, and Pete Seeger. Pattengale wowed the audience with wildly difficult guitar parts, but still managed to remain completely musical.

During the encore, the duo sang their poignant ballad “New York,” with Ryan smirking as he sang “I’ll be in New York,” followed by a surprise cover of Pink Floyd’s “Wish You Were Here.”

The Milk Carton Kids are simultaneously aweing and calming, their mellow, well-blended voices and soft, emotive guitars providing the perfect vehicle for their powerful lyrics and stimulating harmonies. Even before a crowd of 1,000 people, the two managed to make Town Hall feel like a small, smoky folk club in Greenwhich Village.