The pursuit of sonic bliss has driven Lesley Flanigan to be a ceaseless experimenter. Her background in sculpture is often referenced in the way she seems to give a physical form to sounds which she then shapes and bends to her will. So what is she up to now? A new experiment, naturally.

The release concert for her most recent album, Hedera (out this Thursday on Physical Editions ), at National Sawdust last Friday was compelling both both aurally and visually. As it goes for almost twenty minutes, the work explores dislocation in a variety of forms - the artistic space between journey and destination or perhaps purpose and perception. As with her previous work shaping the sonic world of speaker feedback, Hedera takes otherwise unremarkable moments and expands and amplifies them to a point where they become not only apparent but undeniable. 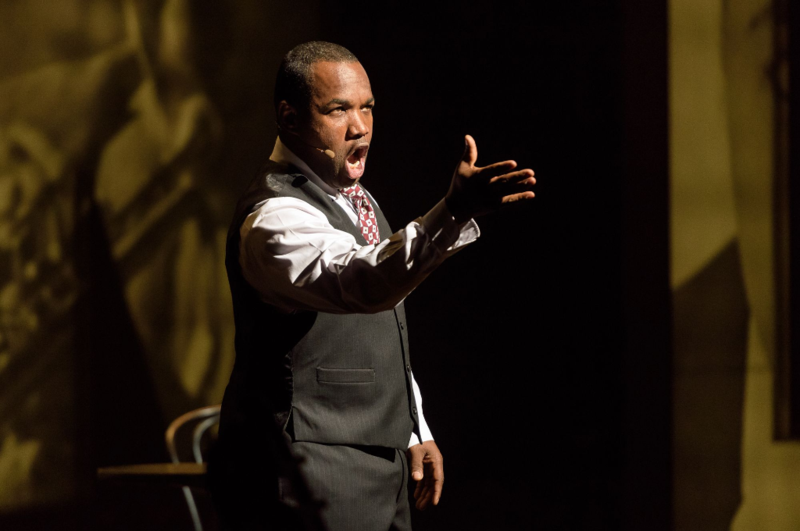 Saxophonist Charlie Parker was one of the seminal jazz musicians of the twentieth century, whose fast and furious improvisational style was the source of bebop, one of the defining styles of the 1940s and 1950s. Like the blues great Robert Johnson before him, Charlie Parker's tragic early death at the age of 34 from a heart attack--almost certainly hastened by years of heroin addiction--sealed his legend as a musician who utterly changed music, and whose influence still lingers into today.

The new opera Charlie Parker's Yardbird, created in cooperation between Opera Philadelphia and the late, lamented Gotham Chamber Opera, imagines Charlie Parker after he has died but before he has passed on into jazz heaven. (The production closes tomorrow at the Apollo Theater.) Audience members take their seats before an onstage cadaver lying under a sheet, its feet boldly sticking out.

Composer Daniel Schnyder and librettist Bridgette A. Wimberly have written a strong work, which possibly might have been even stronger if it was about an lesser-known musician. Because Charlie Parker is such an outsized figure in jazz history, and because he died with so much of his enormous talent unfulfilled, there is a natural curiosity to know more about this musical genius. But the pieces of the story we see on stage are sketchy, and while occasionally interesting, don't really give us deeper insights into the man or his music. Next Thursday, April 7th, the Orchestra of St. Luke's brings an evening of music spanning over 250 years of English music to Carnegie Hall. The evening includes Purcell's devastating "Dido’s Lament" from his opera Dido and Aeneas (featuring mezzo-soprano Susan Graham), a pair of Haydn symphonies including Symphony No. 98, and Britten's setting of a text drawn from Robert Lowell’s verse translation of Racine’s Phaedra (also featuring Graham).

The Orchestra of St. Luke's is one of the finest and most beloved chamber orchestras in the city, and Feast of Music has five pairs of free tickets to give away to net week's concert. Here's how to get them: