"The Hubble Cantata" and Tigue at BRIC's Celebrate Brooklyn! Festival 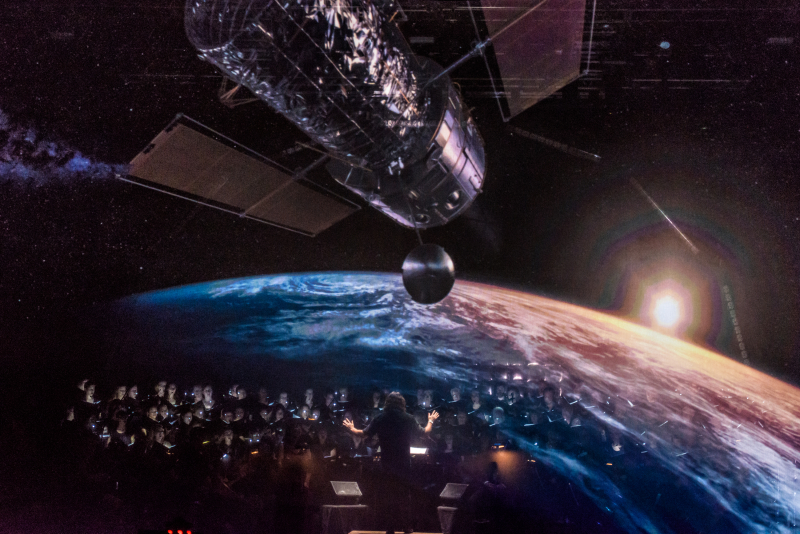 "We are stardust/ Billion year old carbon/ We are golden/ Caught in the devil's bargain/ And we've got to get ourselves back to the garden." --Joni Mitchell

For anyone interested in the origins of the Universe, the concepts of space and time, or the genesis of life, the spectacular, awe-inspiring photographs taken with the Hubble Space Telescope over the past 36 years have been a magical, almost religious source of wonder, enabling humankind to peer back 14 billion years into our collective past. These extraordinary photographs have inspired scientists to dream about what the future might hold for us.

In Paola Prestini and Royce Vavrek's The Hubble Cantata, which received its world premiere as a full-length virtual reality experience at BRIC's Celebrate Brooklyn! Festival on Saturday night, the audience was invited to travel on a shared journey inspired by these majestic images, following the skeletal story of a woman who is born, dies, and seeks to be reborn, just as stars are reconstituted from their own stellar dust. Images of ex-New York City Ballet dancer Wendy Whelan were projected onto a scrim in front of the orchestra and chorus.

The tease of the show to the thousands of people in attendance was that it was the first-ever fusing of a major musical performance with Virtual Reality. But the VR experience--a wishy-washy video of the Orion Nebula called "Fistful of Stars" by filmmaker Eliza McNitt viewed on smartphones inserted into cardboard headsets--was underwhelming at best. I was anticipating oohs and aahs all around me, but mostly I saw a sea of shrugs. With a long line of feature film depictions of space from 2001: A Space Odyssey to Gravity, there has been no shortage of jaw-dropping footage of what space might look like.

Chick Corea with Christian McBride and Brian Blade at Tanglewood 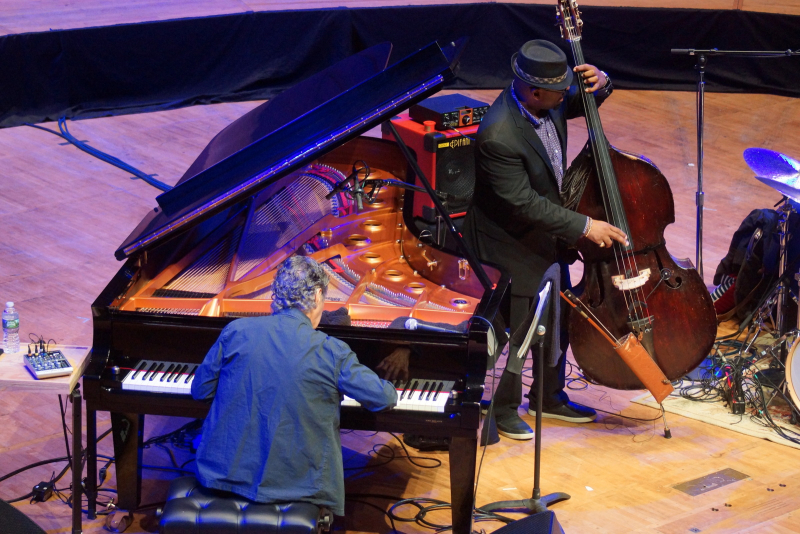 By Sunday night, I'd already had a very full weekend of music in the Berkshires, but how could I not stick around to catch the great Chick Corea at Ozawa Hall? Fresh from their appearance at the Newport Jazz Festival, Chick played two sets with an all-star trio featuring bassist Christian McBride and drummer Brian Blade. Chick, who turned 75 in June and is booked to play an unprecedented eight weeks at the Blue Note this fall, played like a man half of his age, his fingers flying across the keyboard with joyful abandon. The packed house went wild, with noone looking to leave despite the downpour outside.

Bang on a Can Summer Marathon 2016 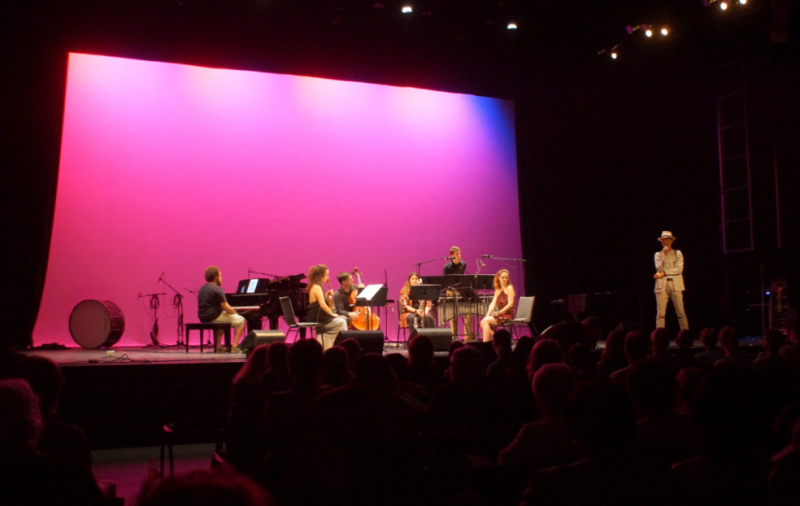 As if there wasn't enough going on in the Berkshires last weekend, Saturday night brought the 15th edition of the Bang on a Can Summer Marathon to Mass MoCA up in North Adams. A six hour smorgasbørd of new music, the marathon is the yearly conclusion of the BOAC Summer Music Festival: a three-week fellowship for young musicians featuring masterclasses with BOAC All-Stars and composers, offering daily performances in the Mass MoCA galleries. This was my first visit back since 2012.

In between catching up with new and old friends out on the patio, I heard music by Bang on a Can co-founder David Lang, new music legends Fredereic Rzewski, Steve Reich, and Louis Andriessen, and this year's composer-in-residence, John Luther Adams. Special props go to Ken Thomson, whose violent, clamorous Boil was a commentary on our scary/real times. And the Irish composer Andrew Hamilton, whose fascinating, maddening Music for People Who Like Art featured soprano Lisa Perry singing, shouting, grunting, gasping, even (fake) vomiting her way through an impossibly difficult score. It sounded like Einstein on the Beach crossed with Ulyssees.

As in past years, there was an afterparty, though it's now been moved from the Mohawk to the American Legion behind the Holiday Inn, which had all of the charm of your parents' basement. Fortunately, Todd Reynolds was there as in year's past to stand up on the bar and offer a warm-hearted toast of congrats to all of the fellows and faculty. Pics below and on the photo page.

Continue reading "Bang on a Can Summer Marathon 2016" »

Tanglewood 2016: Towards the Future 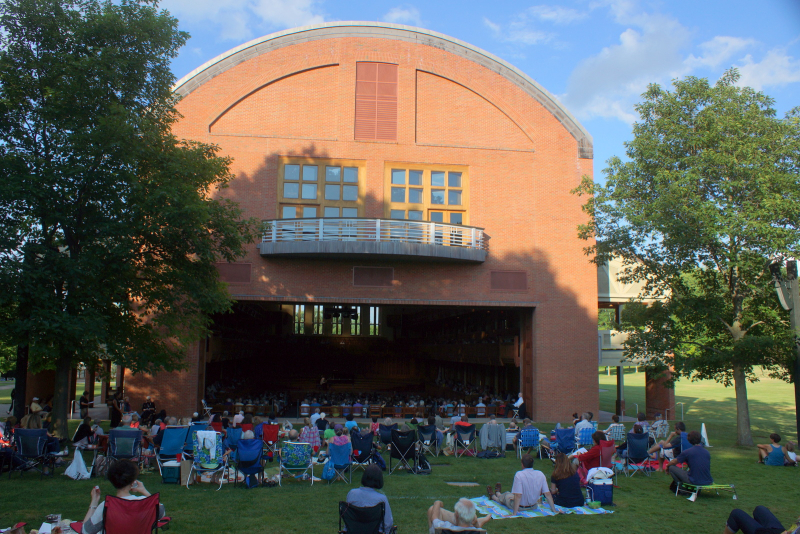 LENOX, MA - It's been eighty years now since the Boston Symphony Orchestra gave it's first concerts in the Berkshire Hills of western Massachusetts and, aside from a four-year hiatus during WWII, it's where they and a host of guest artists have performed every summer since. For many, like your's truly, summer just wouldn't be the same without a trip to Tanglewood.

If you only had time for one visit to the Berkshires this summer, you couldn't have done much better than last weekend, not only for the sheer starpower on hand, but for the inspiration provided by the crack student ensembles that are Tanglewood's true raison d'être. I arrived on Friday evening, about halfway through the 6pm prelude concert in Ozawa Hall. (No matter how early I leave the city, I always seem to be late for these prelude concerts.)

Sitting on the freshly mowed lawn beneath blue skies and fast-moving white clouds, I first heard the weekend's two star soloists, pianists Jonathan Biss and Paul Lewis, play Schubert's Fantasy in F minor for piano four hands: one of those brooding, soul-searching works that characterized Schubert's final months before his death at 31. Lewis remained onstage with a trio of string players from the BSO (Victor Romanul, Michael Zaretsky, Mickey Katz) to play Mozart's Piano Quartet in E-flat, which never tried to be anything more than it was: pretty music for a pretty setting. I was content to lie back and listen to the piano blend with the wind blowing through the oak leaves overhead.

Continue reading "Tanglewood 2016: Towards the Future " »