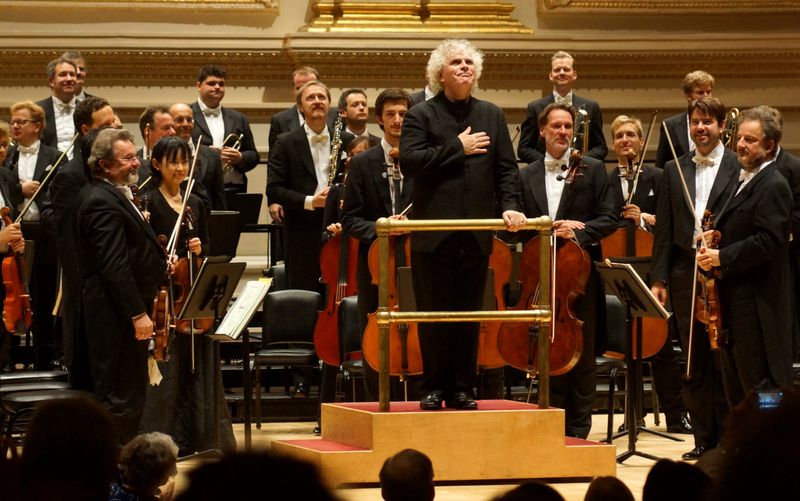 For music lovers, one of the supreme privileges of living in New York has been the near-annual visits of Simon Rattle and the Berlin Philharmonic over the past decade, during which they've wowed us with their stunning artistry in cycles of symphonies by Brahms, Schumann and Beethoven, as well as an impressive string of theatrical presentations. That journey comes to a close tonight at Carnegie Hall, when Rattle - who's had quite the Autumn in New York - leads the Berliners one final time as their music director in a program that pairs works from the Second Viennese School with Brahms' 2nd symphony. In a week that has left many New Yorkers worried for the future, this should be a genuine cause for celebration.

There are a scant few tickets left available, or tune in to WQXR tonight at 8pm for a live broadcast of the concert.

PUBLIQuartet at the Met Cloisters 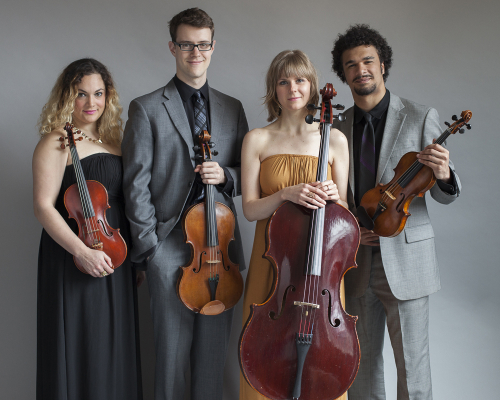 (Photo by The Juilliard School)

Last Saturday was a perfect fall day to visit The Met's Cloisters, situated within Fort Tryon Park on the northern end of Manhattan.  A beautiful walk above the Hudson River brought me to the complex of reconstructed medieval buildings, where I picked up my tickets and had time to walk around the galleries prior to an afternoon concert by the PUBLIQuartet in the Fuentidueña Chapel.

The PUBLIQuartet are serving as The Met's Quartet-in-Residence this season, during which they will perform seven concerts throughout the Met's various spaces. Their program at the Cloisters was part of their ongoing MIND|THE|GAP series, which seeks to build connections between traditional, modern and contemporary music. Here, the starting off point was the music of J.S. Bach, interspersed with contemporary works by Eugene Birman and Alfred Schnittke, as well as group improvisations that incorporated elements of rock and jazz.

It seemed that many of the audience members were confused by what they were listening to - a few even chose to leave at intermission - but the novelty of what the PUBLIQuartet was doing left most of us wanting more. Prior to each piece, a member spoke about the music and what it meant to them, providing valuable insight for this experimental format.

Grand Harmonie with Cynthia Roberts at St. Ignatius of Antioch 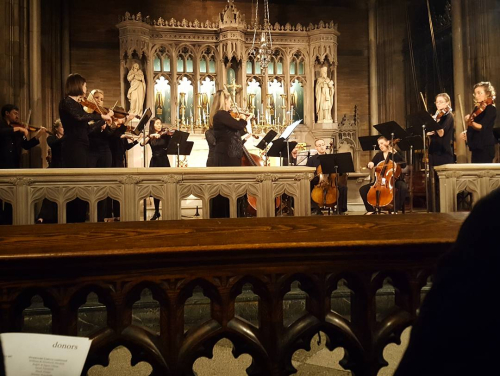 There's something remarkable about period instruments: close your eyes, and you're suddenly transported to another century. As such, period ensemble Grand Harmonie have made it their mission to perform on strings, brass, and woodwinds that were made as early as the 1600s. According to the program, a "Grand Harmonie" would perform specifically for the court's enjoyment. And, while we're no longer in the days of thrones, their poise and skill was no less pronounced.

Last Friday's all-Mozart concert at the church of St. Ignatius of Antioch began with the Violin Concerto No. 5 in A Major, featuring violinist Cythnia Roberts. To my surprise, the strings, while rich in tone, were quiet, almost muted in the cavernous church. Prior to the performance, Roberts told the audience that her instrument was made by Jacob Stainer in 1655, similar to ones played by the Mozart family. She then beautifully smiled at the violin and said, "I wish I could look into the past through this instrument to see what it has seen." 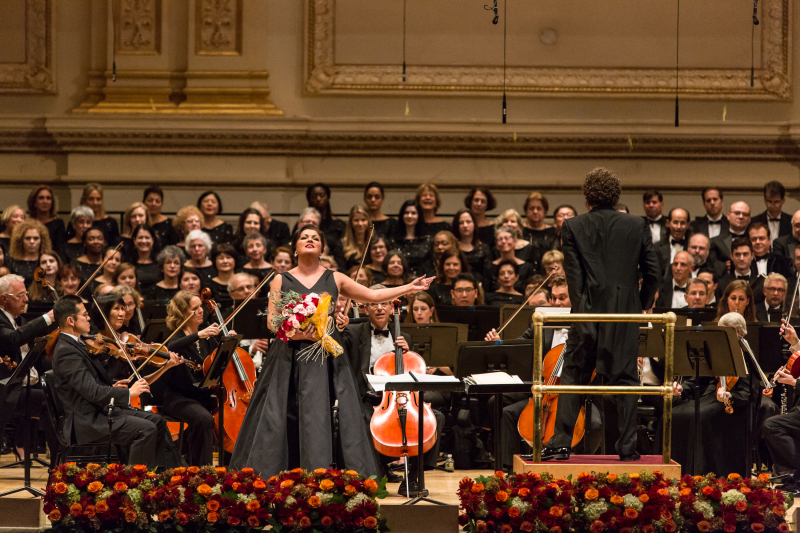 The Richard Tucker Gala, arguably the most star-studded event of the American opera season, took place last Sunday at Carnegie Hall. The gala is a veritable barometer of the best singing in the opera world, and this year was no exception—headlining the program were prima donnas Joyce DiDonato, Anna Netrebko and Renée Fleming, in addition to the 2016 Richard Tucker Award winner Tamara Wilson.

Ms. Wilson easily proved her vocal mastery in her second selection, "Tu al cui sguardi onni possenti" from Verdi’s I due foscari. As she tossed off impossible roulades and cut through more than 100 instruments and choristers with pianissimo high notes, Wilson made Carnegie's bathtub-like acoustic cower under her vocal heft. Her other pieces were no less lovely—Wagner’s "Dich, teure Halle," a trio from Norma, and "Make Our Garden Grow" from Candide—each of which Ms. Wilson handled with finesse and command. She is a major new discovery for the opera world.

Wilson was in good company with reigning diva Netrebko, who was originally slated to sing a duet with her husband, tenor Yusif Eyvazov, until it was announced that Mr. Eyvazov would be unable to perform due to a broken foot. This turned out to be to the audience's benefit, as Ms. Netrebko added the verismo aria "Io son l’umile ancella" to the previously programmed "La mamma morta." Both pieces were riveting, conjuring images of the great Maria Callas and Renata Tebaldi, combining Callas’ vocal drama with Tebaldi’s luxurious sound. Especially breathtaking were the final floated phrases, complete with pitch-perfect octaves and a final ringing morrà.