"I think the unexpected nature (of Knoxville) gives the festival a certain relief that it wouldn't have if it was where everybody expects it to be."

When most people think of Knoxville - if they think of this east Tennessee city of less than 200,000 at all - they might think of the University of Tennessee, which has its main campus in town, or of the surrounding Appalachians, which gave us both moonshine and Dolly Parton. But, for some time now, Knoxville has transcended its relative obscurity with its outsized cultural offerings: it has its own orchestra, its own art museum, and in the past year alone, more than two dozen restaurants and breweries have opened downtown.

But, if there's one thing that's put Knoxville on the international map more than anything over the past few years, it's the Big Ears Festival, the ear-bending festival of new and adventurous music that just wrapped up its sixth edition this past weekend. This was my third consecutive Big Ears, and everything seemed both bigger and more accessible this year. Indeed, it was difficult to walk anywhere in downtown Knoxville without feeling that you were in the middle of a musical theme park. I mean, where else can you bounce from jazz pianist Matthew Shipp, to Meredith Monk, to Wilco? And, that was just on Friday.

Occasionally, I use this space to reflect on the passing of a notable musician or composer, someone whose contributions deserve to be remembered long after they're gone. Today, I want to talk about my friend Kit Gill, who lost her long, hard-fought battle with cancer on Monday. Kit wasn't a musician - in her younger days, she was a fashion model and editor - but I've never met anyone who cared more deeply about music, or was more generous towards those who made it.

Kit loved all of the arts: music, dance, fine art, fashion. But opera was her passion, and she was a regular presence at the Met, as well as opera houses around the world. (She boasted of having attended 26 consecutive Bayreuth Festivals, which is a lot even for Wagner fans.) If Kit enjoyed a particular production, you could bet on seeing her at every performance, including dress rehearsals.

In many ways, Kit was unapologetically old school. She had no cell phone, no computer: only a fax machine (!) and a landline. She would send me reviews the old fashioned way: by clipping them out of the paper edition of the Times and sending them snail mail. But, Kit was no fossil. She read widely, and pursued her own blend of radical (chic) politics, finding solidarity with everyone from Venezuelan President Hugo Chavez, to the Occupy Wall Street movement.

Kit had hundreds of friends and thousands of stories that rivaled those of Forrest Gump. There was the time she had the entire Bolshoi Ballet over to her 1820's farmhouse in the Berkshires for a vodka-fueled party after their performance at the Pillow. There were the late nights singing karaoke in SoHo with René Pape. Or weekends spent hanging out at Max's Kansas City with her friend Bobby Short. Or how the billionaire Edgar Bronfman - whom Kit dated after her divorce - would fly up to the Berkshires and land his helicopter on her croquet lawn.

Improbably, I fell into Kit's rarefied circle of friends. We met in 2011 at a reception hosted by the Wagner Society - of which she was Vice President - at a restaurant near Lincoln Center celebrating the Met's new (and, according to Kit, loathsome) Ring cycle. I'm not entirely sure what Kit saw in me - perhaps she was excited at the prospect of recruiting someone who wasn't in their 70's, or wearing plastic horns. Before long, I was paying Kit regular visits at her richly decorated apartment on 5th Avenue, where she alternated between serving me glasses of wine (she didn't drink herself) and fighting to keep her dogs Happy and Nikki off of the upholstery.

Tristan Perich at The Kitchen

by Robert Leeper and FoM 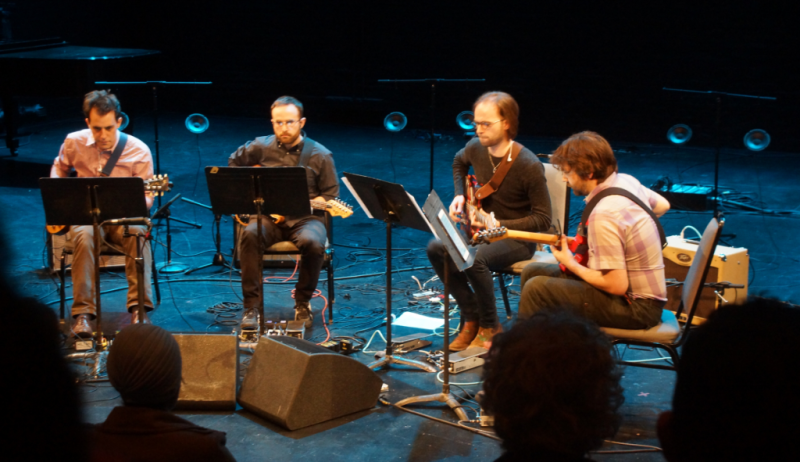 Let me cut to the chase: there is no one today writing music that is more relevant, more engaging, more viscerally exciting than Tristan Perich. Over the past decade, Tristan has carved out a unique niche at the crossroads of acoustic and electronic, of visual art and sound, of theoretical physics and hacker culture. And he's done so in a way that cloaks his music's complexity in a vein of ecstatic trance, much as Steve Reich does in his deceptively minimalist compositions.

The Kitchen, which has been something of a home for Tristan over the past few years, presented a two-day retrospective of his music this past weekend, all of which utilized 1-bit electronics and a variety of acoustic and amplified instruments. On their own, these 1-bit sounds come across like a Game Boy gone wild, but there is something uniquely satisfying, even thrilling, about the interplay between digital and analog Tristan achieves with these works.

"I think about the basic states of a signal," he says, "as it moves through a circuitboard and then out to a speaker... (the same as music) from a score to the actions of a musician on stage."

On Friday night, electric guitar quartet Dither kicked things off with a new version of Interference Logic (2010, rev. 2017). The music started softly and simply, until suddenly the peace was shattered by a piercing electronic pulse: not quite a siren, but no less insistent or penetrating. Over time, the guitars slowly built in volume until they eventually overpowered the 4-channel electronics. Man: 1, Machine: 0. 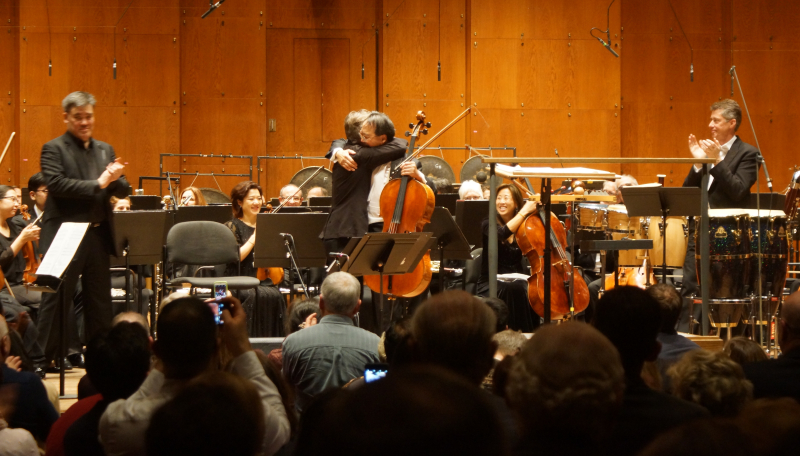 At the end of a momentous week at the NY Philharmonic, it felt only right to stop by David Geffen Hall on Saturday night for the orchestra's final concert before leaving on their European tour this week. Indeed, the first half of the program almost felt like an homage to incoming NY Phil President and CEO Deborah Borda, who's spent the past 17 years leading the LA Phil to new heights of artistic and financial success. (Borda attended the series' opening concert last Wednesday.)

John Adams, who has been the LA Phil's Creative Chair since 2009, wrote The Chairman Dances (1985) in anticipation of (and not, as you might expect, drawn from) his groundbreaking 1987 opera Nixon in China. Subtitled "Foxtrot for Orchestra," it's bright and cheery music is interjected with periods of tension, just like the complex characters it portrays: Chairman Mao and his wife, Madame Mao. The audience cheered wildly at the end, a reaction still somewhat surprising for music that's barely 30 years old.

The main event was the NY premiere of Esa-Pekka Salonen's Cello Concerto, written for and performed by Yo-Yo Ma. Salonen, who spent 17 years as the LA Phil's music director, left that post in 2009 to spend more time composing; he remains L.A.'s Conductor Laureate, as well as the NY Phil's Composer-in-Residence. Salonen, who has written concertos for Piano (2007), Violin (2009), and alto sax (!) (1980), apparently agreed to write one for Yo-Yo after a post-concert bender. "I know that we had agreed on something,” Salonen told the Times. “But I wasn’t sure on what."

Salonen spent nearly two years writing the 25 minute work, saying he wanted to push Yo-Yo to the outer limits of his seemingly-limitless ability. "When a musician is at the end of their physical capabilities," Salonen told us from the stage, "that frees them up to do something really magical."

Yo-Yo, who incredibly is now 61, playfully objected when he first saw the music.

"Why was Esa-Pekka angry at me?" Yo-Yo said. "What does he have against the cello? Why are you torturing me with impossible things? You know I can’t do that, you know it’s too fast.”