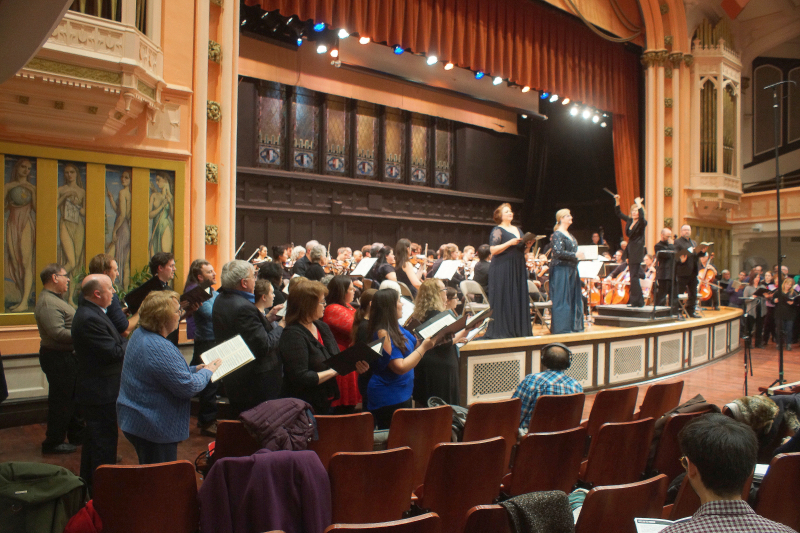 When Beethoven premiered his Symphony No. 9 in Vienna's Karntnertör Theater in the spring of 1824, it wasn't the clean, polished experience one might expect of the most revered symphony ever written. The performers were a mixed bag of players from the house orchestra, the Vienna Music Society (a.k.a., Gesellschaft der Musikfreunde), and various amateurs. The chorus was all-volunteer. And, with only two full rehearsals, the performance was reportedly spotty, even sloppy at times. It didn't help that Beethoven - who was by then totally deaf - conducted the performance; beforehand, the theater's Kapellmeister instructed the orchestra to ignore Beethoven's wild, out-of-sync gestures.

Nevertheless, the audience - which numbered just shy of a thousand - responded to this monumental, ground-breaking work with rapturous applause and multiple standing ovations. The greatness of Beethoven's achievement could not be ignored, regardless of the circumstances. (A repeat performance on a sunny Sunday afternoon two weeks later was less successful, playing to a half-empty house.)

In that sense, the performance of Beethoven's 9th this past Sunday afternoon by the all-volunteer Greenwich Village Orchestra at Washington Irving High School was probably the most authentic I've ever heard. Sure, I've heard plenty of polished performances of the 9th by professional orchestras in some of the greatest concert halls in the world. But, I've never heard one more vital, filled with the same struggle and hard-won victory as that Vienna premiere 193 years ago.

A New Day at the NY Phil 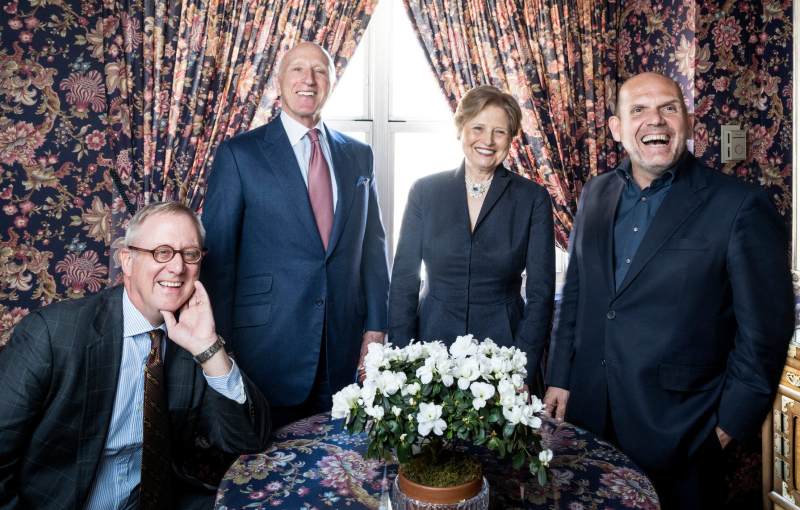 Not that long ago, things looked pretty grim at the New York Philharmonic. Last January, music director Alan Gilbert - whose up-and-down eight year tenure comes to a close this season - was replaced with the relatively unknown Dutch conductor Jaap Van Zweden. This January, an exodus of top execs began when Ed Yim, director of artistic planning, left to become the executive director of the American Composers Orchestra. It ended three weeks later with the announced departure of president Matthew Van Besien, who is leaving to head up a university performing arts center. And this on top of the tenuous plans surrounding the long-overdue renovation of David Geffen Hall, which will displace the Philharmonic for two seasons starting in 2019 - assuming they can raise the $500 million they still need without a full-time development director. Sheesh.

Then, out of nowhere, came today's surprise announcement: Deborah Borda, who was the NY Phil's executive director from 1991-1999, will be returning to the post this September as President and CEO. In the intervening 17 years, Borda has turned the LA Philharmonic from a second-tier American orchestra to one of the most progressive, well-run orchestras in the world. Here are a few tidbits:

In the process, Borda has become the leading orchestra executive in the United States, and one of the most highly respected performing arts administrators in the world, something I learned firsthand when I attended the League of American Orchestras Essentials of Orchestra Management program more than a decade ago. To say she was a "good get" for the NY Phil is an understatement. (You can read the rest of her long list of accomplishments here.)

Continue reading "A New Day at the NY Phil" » 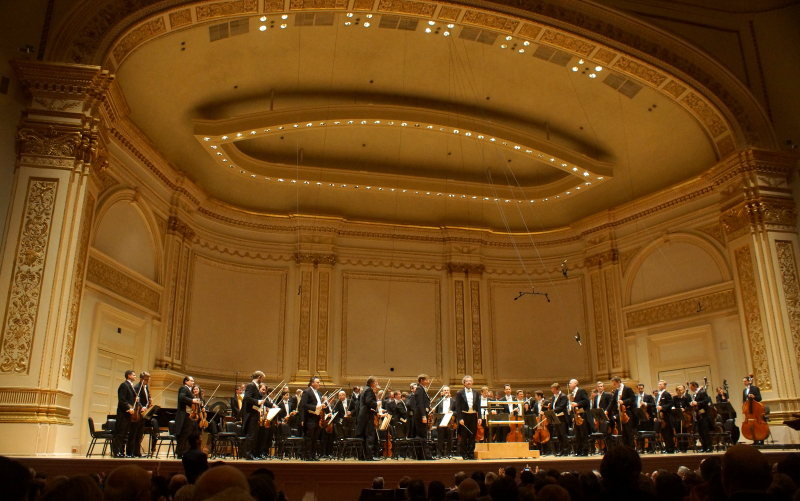 Among the world's leading orchestras, the Vienna Philharmonic is unique in that it does not have a permanent music director, and the foremost ruling body of the organization is the Orchestra itself. The closest thing Vienna has to a regular collaborator is their fellow Austrian Franz Welser-Möst, who from 2010 to 2014 was the general music director of the Vienna State Opera, which supplies all of the members of the Vienna Philharmonic. Over the past decade, Welser-Möst has twice led the celebrated New Year's concert, and has appeared with the orchestra numerous times on tour and at festivals around the world.

Last Friday, the Vienna Phil returned to Carnegie Hall for their annual three night run. Franz Schubert’s Overture to Die Zauberharfe, one of his most famous and popular pieces, kicked the evening off with a well paced, lyrical performance.

Rene Staar’s Time Recycling (2014), presented here in it's U.S. premiere, drew from a variety of musical styles in a loose chronological order. (In the program notes, Staar said that the piece's title refers to how the Internet and other technologies have dissolved our sense of time.) There was Takemitsu-like impressionism and tone clusters, along with surprising twists to bossa nova, jazz and modernism. A small ensemble within the orchestra traded textures, creating interesting effects. It was enjoyable to pick out references as they appeared, but in the end, the references to time failed to give the loosely connected themes coherence.

Richard Strauss had a special relationship with the Vienna Philharmonic as both composer and conductor, once stating: "All praise of the Vienna Philharmonic reveals itself as understatement." Welser-Möst mined that relationship in his performance of Strauss's epic Ein Heldenleben, which was notable for it’s sheer beauty. Which might not be surprising given the orchestra onstage, but Ein Heldenleben extends through a variety of themes, many of which can be prevailingly aggressive and harsh. Throughout, the orchestra’s strings lived up to their peerless reputation - particularly concertmaster Volker Steude's lovely solo passages - and the superb woodwinds were positively melting in their choirs. The brasses and woodwinds could snort, snarl, bray and swoon with the best of them, and the percussion, driving much of the work, was suitably raucous and disruptive.

Welser-Möst’s close-knit relationship with the Philharmonic was evident throughout. He seemed confident in his own ability, yet was able get out of way and allow the musicians to shine without interference.