John O'Hurley at the Café Carlyle 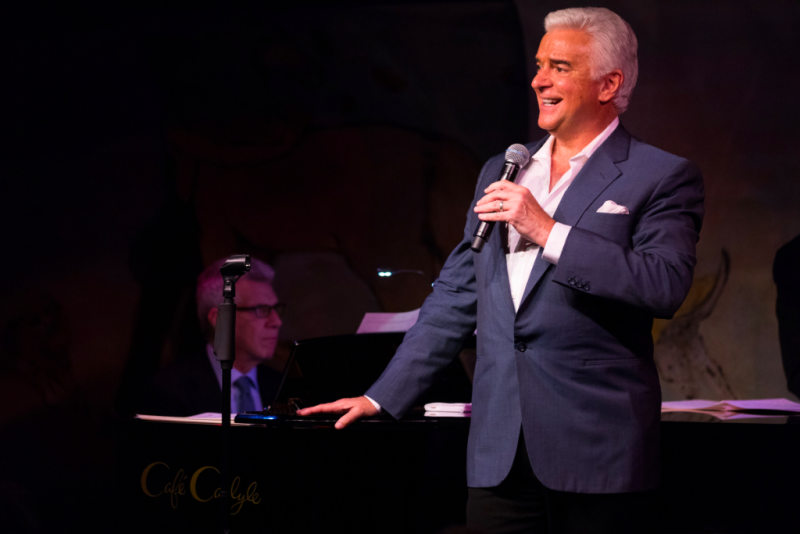 "The definition of a Celebrity is that you're allowed to do what you otherwise have no business doing." - John O'Hurley

Anyone fan of Seinfeld remembers Peterman, Elaine's pompous, larger-than-life boss who appeared on the sitcom from 1995-98. And what they probably remember the most about Peterman is his distinctive voice, which apparently was modeled after "'40s radio drama, combined with a bit of a bad Charles Kuralt."

Turns out the real Peterman, John O'Hurley, sounds a lot like the character in real life, which I discovered when I saw O'Hurley make his Café Carlyle debut last week. O'Hurley calls his show "A Man With Standards," referring to both songs by Henry Mancini, Hugo Peretti, Anthony Newley and others, and the gentlemanly manners that have been all-but-forgotten. Like Peterman, O'Hurley's show is peppered with anecdotes from his own colorful life, like the time he found himself in Frank Sinatra's Palm Beach home and, when asked to sing, performed one of Sinatra's own songs: Joe Raposo's "You Will Be My Music." (After an awkward silence, Sinatra told O'Hurley: "You sounded good.")

O'Hurley was long-winded at times, and he's not going to win any accolades for his singing voice, which was powerful but uneven. (Backing O'Hurley were Steve Rawlins on piano, Ron Vincent on drums, and Rusty Holloway on bass.) But, it's still an impressive, entertaining show, filled with unique stories from O'Hurley's New England upbringing, his years on The Young and the Restless and Seinfeld, and his more recent forays into reality TV with Dancing with the Stars and the National Dog Show. And, just when you thought you couldn't take any more of his pomposity, O'Hurley remind you of how he's fought and scraped for his success, with his perseverance eventually landing him on the biggest cabaret stage in New York. I guess I'd feel pretty good about myself, too.

O'Hurley appears at the Café Carlyle through Saturday April 8, which is currently offering a special 2 for 1 deal without food and beverage minimums Tuesday-Thursday. Reservations and info on the Carlyle's website, or call +1 212 744-1600. 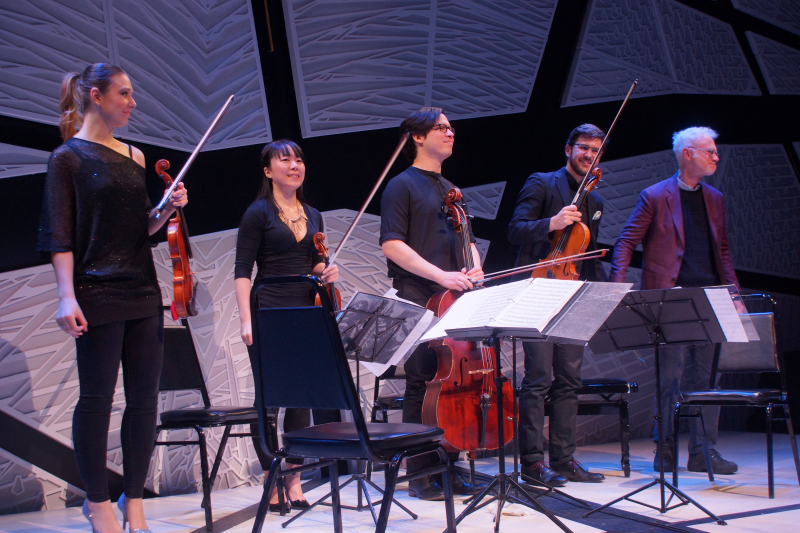 "I can't tell you how much I love this quartet. The way they play this music is just amazing. I actually just sat with them backstage and told them: 'We have the same DNA.'" - John Adams

After two days of rain and cold, the sun finally popped out Sunday, and I was tempted to spend a lazy afternoon in my back garden, just starting to bloom with crocuses and tulips. All I wanted to do was read a book, or catch up on some other things I'd been putting off. But, I had a show on the calendar, and so I dutifully put away the lawn furniture, packed up my bag and trudged off to Williamsburg.

The moment I surfaced at Bedford Ave, after a painfully long ride on the G train, I wished I'd never left my garden. The crush of iPhone-blinded hipsters and wide-eyed tourists made it nearly impossible just to walk down the street. But, I pressed on, past the hordes of buskers and brunchers to National Sawdust, where the Attacca Quartet (Violinists Amy Schroeder and Keiko Tokunaga, violist Nate Schram, cellist Andrew Yee) was already halfway through their first piece, John Adams' String Quartet No. 1 (2008). I sat quietly upstairs in the balcony; almost of the cocktail tables downstairs were full.

The Attacca tore through the music, mixing stop-and-go rhythms with gentle melodies before ending with a Bartòk-like stretch of haunting dissonance. During the applause, they acknowledged a slight white-haired man standing directly beneath me, applauding vigorously. I almost dropped my notebook when I looked down and saw that it was Adams himself. Did he really fly all of the way from Berkeley just to be here? Not exactly: turns out Adams was in town for both the St. Louis Symphony's performance of The Gospel According to the Other Mary at Carnegie on Friday, and the star-studded Bob Hurwitz/Nonesuch Celebration at BAM on Saturday. Still, it's not every day that you spot one of the world's greatest composers sitting in an 80 seat theater in Williamsburg.

Tan Dun and the Juilliard Orchestra at the Met Museum 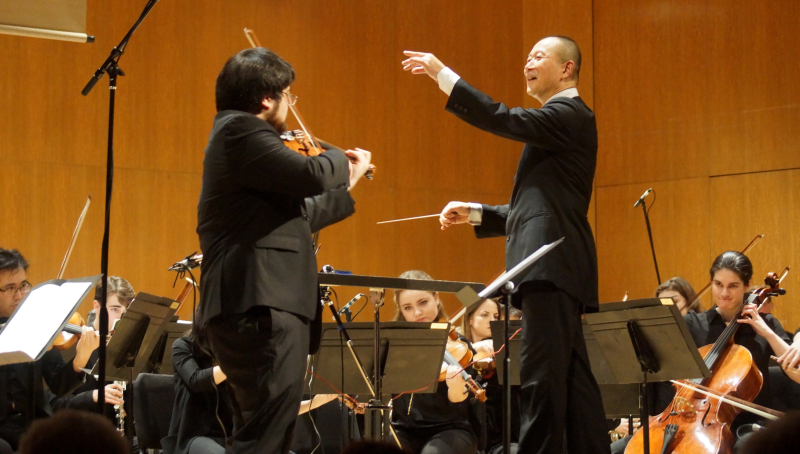 If there's such a thing as a rock star composer, Tan Dun comes pretty close. In addition to winning an Oscar, a Grammy and the Grawemeyer Award, he's written music for the 2008 Beijing Olympics and a "Disney Symphony" for the opening of the company's new theme park in Shanghai, broadcast to an audience of more than 65 million.

On a somewhat less grand scale, Tan has amassed a large catalog of chamber and orchestral music, including (to date) five operas. Among these, his most ambitious has been The First Emperor, commissioned by the Met Opera in 2006. Based on the life of Qin Shi Huang, the emperor who united China in the second century BCE, the opera showcased Tan's characteristic blend of Chinese and Western music, as well as his unfortunate penchant for cloying melodies. Still, there's no denying the fact that Tan is box office: all seven performances of the run were sold out.

Recently, New York's other Met - the Met Museum - commissioned Tan to write a new work in conjunction with the opening of their landmark exhibition The Age of Empires: Chinese Art of the Qin and Han Dynasties, featuring archaeological treasures from China's early empire - including the famous terracotta warriors and other artifacts from Qin Shi Huang's mausoleum. Tan responded with two not-exactly-new works, both of which were premiered Friday night at the Met's Grace Rainey Rodgers Auditorium by the Juilliard Orchestra, with the Tan himself conducting.