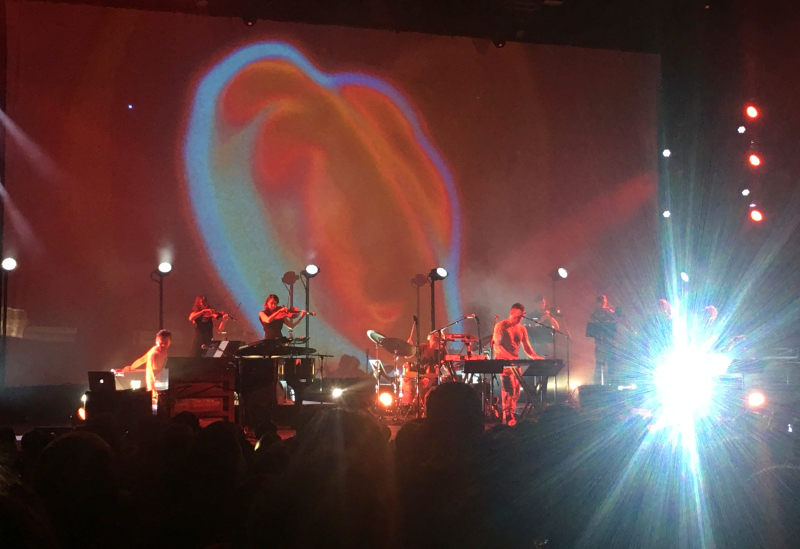 When Sufjan Stevens, Nico Muhly, Bryce Dessner and James McAlister first performed their collaboration Planetarium at BAM in 2013, we were blown away by the experience, which seamlessly blended elements of classical, pop, rock, and electronics, accompanied by some pretty awesome visuals. As we said at the time:

"This was edgy rock and pop, and its straightforward presentation enabled it to breathe and communicate without being suffocated by mists of pretension. Lush harmonies melded together with a luxurious flow and were enhanced by the smoky projections on stage; you couldn’t help but be moved by the aural and visual spectacle."

Last month, Planetarium was finally released as an album, and to mark the occasion, Sufjan, Nico, Bryce and James brought their live show (sans lasers) back to NYC last night with a benefit concert at BRIC Celebrate Brooklyn. The standing room-only crowd was enthusiastic from the start, cheering wildly after the big numbers "Jupiter" and "Saturn." In between songs, Sufjan held sway like a made-for-TV astronomer while making numerous oblique references to the challenging times we live in, encouraging us to look to the stars to remind us that the universe is much bigger - and vastly more open - than we are.

Watch a performance of "Mercury" from Monday's Late Show here. More pics below and on the photo page.

Lincoln Center Festival: Bang on a Can All-Stars with Gong Linna and Ornette Coleman's Chamber Music 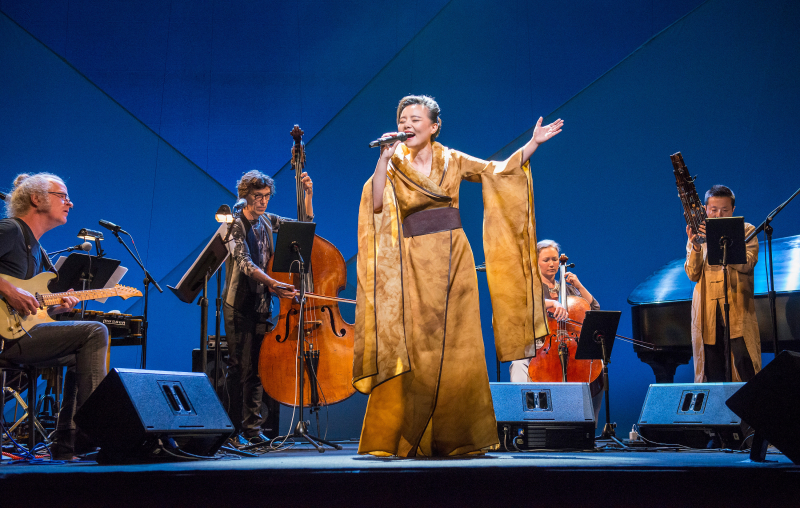 The 22nd edition of the Lincoln Center Festival kicked off last week, bringing it's usual surfeit of starry theater and ballet companies to the various houses of the Lincoln Center campus left otherwise vacant for the summer. Amidst these, there were a pair of musical offerings that straddled the worlds of jazz, contemporary classical, and world music.

On Friday, I went to the John Jay Theater to see the Bang on a Can All Stars perform with Chinese vocalist Gong Linna, who's become something of a sensation in her home country for her charismatic stage presence and acrobatic singing. They met while the All-Stars were touring China a few years ago and, after after BOAC founders David Lang, Julia Wolfe and Michael Gordon sat down with Gong and her husband, composer Lao Luo, (a.k.a. Robert Zollitsch) they came up with the 12 part song cycle Cloud River Mountain. Collaboration is nothing new for the Bang on a Can trio - previous efforts include The Carbon Copy Building (1999), Lost Objects (2001), and Shelter (2005) - but it was Lao who was instrumental in integrating the unique harmonies and rhythms of Chinese music.

The songs were sung in a mix of English and Mandarin, with lyrics drawn mostly from the mythological poetry of Qu Yuan, written during the Han dynasty (206 BC-220 AD). It was difficult to follow without supertitles or any kind of house lighting to read the translations in the program, but Gong's theatrical performance - matched by her flamboyant costumes - was captivating in its own way. As for the music, it ranged from Julia's "Into the Clouds", which raged with Patti Smith-like intensity, to Michael's persistent, heavy-handed "River", to David's quiet, haunting "Girl With Mountain." For an encore, Gong performed the wild, frenetic folk song "Tan Te", which first catapulted her to stardom.

Meanwhile, David, Julia, Michael and the All Stars have all decamped to North Adams, where they'll be ensconced at Mass MoCA for the next three weeks at the Bang on a Can Summer Festival, culminating in the annual Summer Marathon on August 6 with guest composer Louis Andriessen. Details available on their website. More pics here. 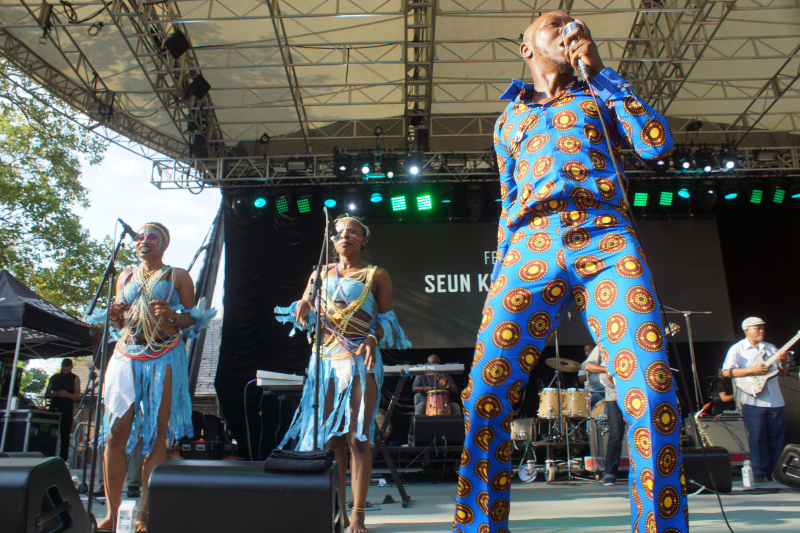 It's been six years since I last saw Seun Kuti play Celebrate Brooklyn with Egypt 80, the backing band of his famous father, the late Afropop pioneer Fela Kuti. So, it was good to see him back at Central Park Summerstage on Sunday, strutting across the stage in a blue patterned jumpsuit that looked like it had been pulled straight from his father's old closet. Seun, now 34, has already been at this for more than 20 years, and now that he's the same age as his father was in is prime, there's really no separation between them. Jazz and funk legend Roy Ayers opened with his own sublime set, singing classics like "Everybody Loves the Sunshine" while accompanying himself on vibes.

Warm Up at MoMA PS1 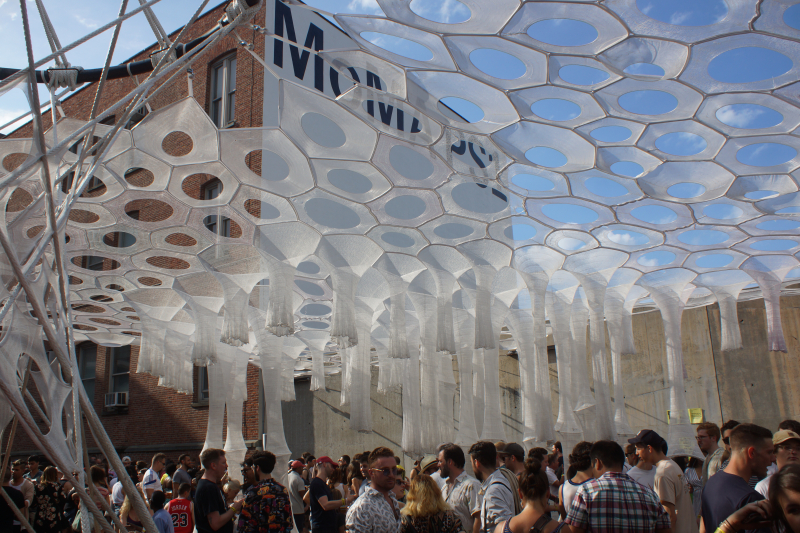 The bright, warm sun brought out the beautiful people in droves Saturday afternoon to Long Island City, where MoMA PS1 was back in full swing with Warm Up, which is now - incredibly - in its 20th year. On the boards playing a mix of deep house and ballroom tracks were NJ's MikeQ and Montreal's Jacques Greene. Future acts on the weekly series, which continues all the way through Labor Day weekend, include Jackmaster, ASAP Ferg, Laurel Halo, and a collaboration between Total Freedom and video artist Ryan Trecartin. For the first time, Warm Up is partnering with local internet radio station Know-Wave to broadcast each event so you can bring the party with you to the beach, or wherever you happen to be. Though, I'm pretty sure the crowd where you are won't look nearly as good.