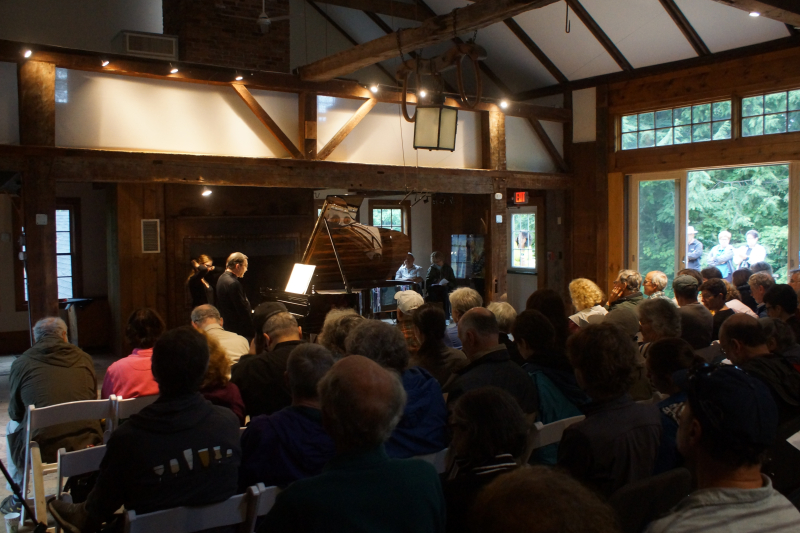 LENOX, MA - In the summer of 1949, Aaron Copland invited Olivier Messiaen, who at that time was little-known in the U.S., to be a composer-in-residence at Tanglewood, which was just then entering its second decade. During his time in the Berkshires, Messiaen composed, taught the TMC fellows, and worked with Leonard Bernstein on preparations for the premiere of his Turangalîla-Symphonie later that fall. (Lenny's holding the score in this pic, with Messiaen looking on a bit nervously from the left.) Messiaen would return to Tanglewood a second time more than a quarter-century later for another performance of Turangalila, this time with Seiji Ozawa conducting.

Beyond music, it isn't clear what Messiaen did in the Berkshires, though it's likely he spent a fair amount of time watching and listening to birds, as was his lifelong habit. For Messiaen, birds represented a form of purity in music, which at the time was at risk of losing its soul at the hands of total serialism - of which Messiaen himself was an early proponent. It was around that same time that Messiaen had begun to transcribe birdsong and incorporate it into his music, capturing its chirping rhythms and often-brusque timbre more precisely than anyone before him.

Last year, in his final season as artistic director of the Aldeburgh Festival, the multi-faceted pianist and educator Pierre-Laurent Aimard designed a unique program in which he performed Messiaen's mammoth Catalogue d'oiseaux (Catalogue of the Birds, 1958) over the course of an entire day, in locations both indoors and out. For Aimard, who was a friend and student of Messiaen's for more than 20 years, this was more than a mere stunt: each of the thirteen pieces, some lasting nearly half-an-hour, were written to capture a bird and its landscape at specific times of the day.

Continue reading "Birds and Music with Pierre-Laurent Aimard at Tanglewood" »