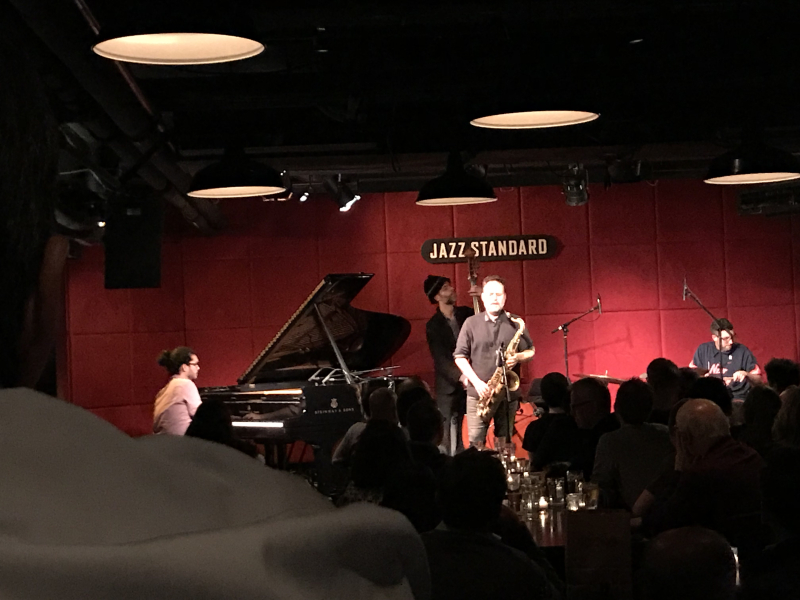 On Tuesday, drummer and composer Mark Guiliana and his Jazz Quartet treated audiences at the Jazz Standard to the group’s first at-home show since their latest release, Jersey. Guiliana, a New Jersey native, kept the Jersey theme at the forefront for the night: he donned a New Jersey t-shirt and asked which audience members hailed from the Garden State. (Only one raised their hand.)

From the start, the group established their bent for longer-formed song structure, fearless experimentation, and a strong sense of fun.“inter-are” kicked things off with a high-octane energy bordering on the clamorous before cooling into stripped down, atmospheric territory - like the flames on a stovetop turned down for serious cooking. Guiliana laid down an adrenaline-fueled, hard-hitting tribal groove. Pianist Fabian Almazan muted the strings inside the piano to create funky, clavinet-like timbres before tearing into a raucous solo. And Jason Rigby showcased fluid runs and riffs on the tenor saxophone with inspired sensitivity.

The album's title track ("Jersey") started with a low, ominous marching ostinato. The energy built gradually over several minutes, with most of the complexities in rhythm and texture coming from Guiliana’s dexterous and dynamic drumming.

“Our Lady” was the most light-hearted composition on the program. It rode on a steady Latin-infused groove that managed not to pigeonhole itself into any particular Latin sub-genre. Time signatures changed unexpectedly, chord progressions were familiar but unpredictable. Rigby’s saxophone lines gave the session's listeners the closest they would get to a singable melody, and his playing gave the tune its buoyancy.

“BP” offered another long and gradual build, this time driven by an understated, yet insistent and sophisticated drum pattern. On “September,” Guiliana bowed out completely, while bassist Chris Morrissey brought out his bow and played a low drone, Alzaman pedaled a low tremolo, and Rigby's yearning melody soared over the top.

The evening closed out with David Bowie’s “Where Are We Now?”, a nod to Guiliana's history of playing with Bowie. The group's soulful arrangement left the audience with a tough question to think about as the evening came to an end.

Overall, Guiliana's set was dynamic, introspective, and thrilling. He did his home state proud.