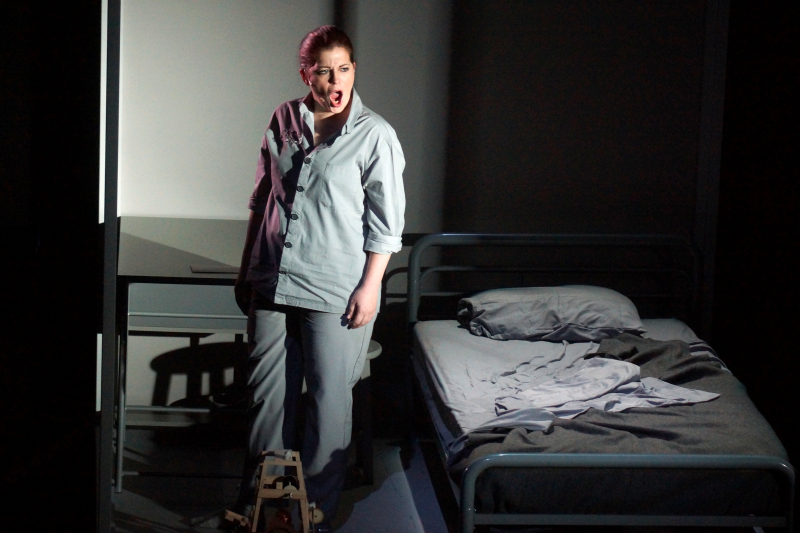 Unfortunately, I haven't had a chance to see most of this year's PROTOTYPE Festival of new opera, now in it's 6th year, but I did make it out to the Baruch Performing Arts Center last night for the world premiere of Mikael Karlsson's startling one-act The Echo Drift. Set in a prison in a dystopian future, it centers around a female prisoner (Blythe Gaissert) serving a life sentence in solitary confinement. She is visited there by a talking moth (John Kelly), who offers her a Faustian escape by abandoning her connection to time and space.

For a world premiere opera, The Echo Drift had a remarkably polished feel: from the industrial stage design (Elle Kunnos de Vos, who also wrote the libretto), to the Tron grid-like light projections (Simon Harding), to the always excellent International Contemporary Ensemble, which dispatched Karlsson's electro-acoustic score with total command. But, it was Gaissert who ran away with the show, with a fierce, defiant performance that grabbed my attention all the way in the back row. I'm sure we'll be seeing more of her on NY stages in the months and years to come.

If you haven't seen it, The Echo Drift has one final performance tonight at the Baruch Performing Arts Center. Tickets and info available on the Prototype website; info about other shows here.

“Music remains for me not sacred, but a spiritual moment. I’m devoted to God because I think I was gifted by him, and I know that my mission during my years here on this earth is just to try and develop the gift that I received.” - RCO Chief Conductor Daniele Gatti, NY Times, 2016

By most estimates one of the best orchestras in the world (if not the best), the Royal Concertgebouw Orchestra has always impressed during their visits to the Big Apple. But, as great as this orchestra has been for most of its 130 year existence, the addition of the formidable maestro Daniele Gatti last season as Chief Conductor seemed to raise the artistic bar even higher, as evidenced by their two concerts at Carnegie Hall this week.

These were Gatti's first local appearances with the RCO, but he is no stranger to New York concertgoers, having led the Vienna Phil in a series of memorable concerts in 2015, as well as the Met's extraordinary new Parsifal in 2013, which returns next month. As with that six hour opera, Gatti conducted everything on these concerts from memory, revealing a near-insane level of preparation that is said to extend beyond mere score analysis to poring over biographies, historical essays, even related novels and plays that the composer may have read.

“What is important is to try and be in the head of the composer,” Gatti told the NY Times in 2016. “If I’m seeing the world through different eyes, I can see also the score with new eyes.”

This deep level of familiarity allows Gatti to take the music to unexpected places. In the Act 3 Prelude and "Good Friday Music" from Parsifal, Gatti drew the tempi way out to highlight the majestic consonances of Wagner's music in the tender strings and burnished brass. It was clear from the outset that Gatti had gone over every square inch of the score - each note, every marking - and had successfully  gotten the RCO players to buy into his vision. 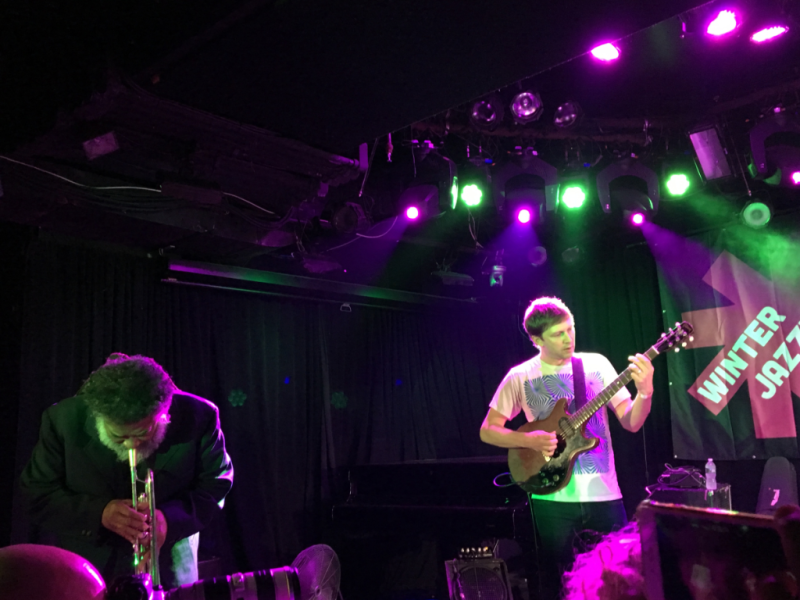 It's often hard to see the forest for the trees at an event like Winter Jazzfest. WJF has set itself apart from other jazz festivals through its expansiveness, its large physical presence, and its commitment to inclusion and social justice. But, it can at times be difficult to know just what kind of person the festival is really for. There's no 100% definitive answer - any good jazz festival is pluralistic by nature - but last night's festival finale at Le Poisson Rouge might have given the closest indication.

The musical intersection of Bay Area experimental indie-pop veterans Deerhoof and Mississippi-born avant-garde jazz sound painter Wadada Leo Smith, in tandem with an audience who enthusiastically embraced both, felt like it belonged right at the heart of a festival that uses its energy to shatter both genre and generation boundaries and relentlessly asks the question, "What if?"

Deerhoof's sonic milieu regularly runs the gamut from riff-laden UK garage rock to aggressively wobbly free jazz - sometimes in the same 30 second span - and true to form, they blazed through a set of cheery, noisy, disorienting and catchy music with ease and gusto. The real interest, though, was where the band found common stylistic and improvisational ground with Smith. The most immediately apparent similarity is that Smith and Deerhoof had a knack for turning simple, even beautiful melodic lines into something more adventurous with a simple directional or stylistic turn. Smith's subtle strains and muted note rips would compliment the pinched harmonics and stuttering effects of Dietrich and Rodriguez's guitars, and he would complement their more droning moments with low, expressive trumpet tones.