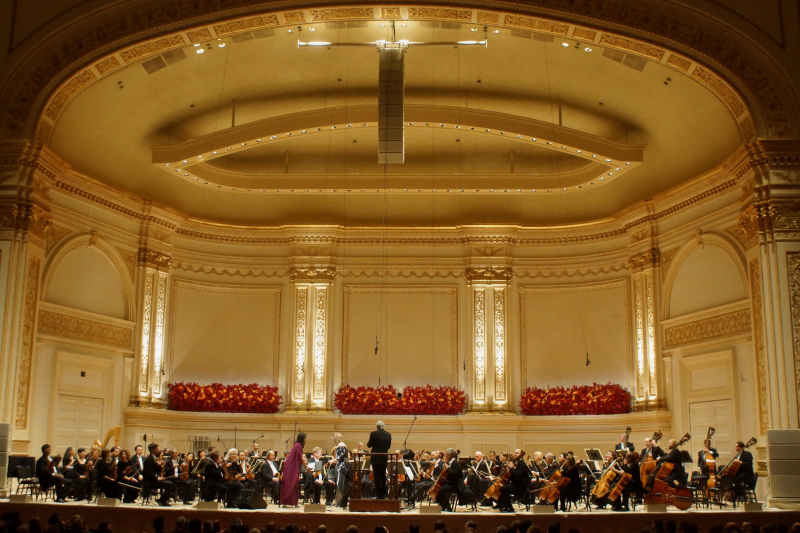 Carnegie Hall opened it's 127th season last Wednesday with Michael Tilson Thomas leading the San Francisco Symphony in a pops-style program that skewed heavily towards Americana and Broadway (with a little Liszt thrown in.) Which is precisely the sort of crowd-pleasing concert that the occasion called for, not unlike the all-Bernstein concert MTT programmed for the last time San Francisco opened the Carnegie season in 2008.

The program was dominated by Gershwin, bookended by his visceral, dancey Cuban Overture (1932), and ending with An American in Paris (1928). In between, the orchestra played Liszt's Mephisto Waltz: a Romantic showpiece not quite rising to MTT's characterization of it as "incredibly daring."

The bulk of the program consisted of a selection of show tunes, sung by six-time Tony winner Audra McDonald and celebrated soprano Renée Fleming, who is working to establish her Broadway cred with her recent run as Nettie Fowler in Carousel and her new album, Renée Fleming: Broadway.

McDonald played to her strengths with Gershwin's "Summertime" and "Vanilla Ice Cream" from Jerry Bock's 1963 musical She Loves Me, investing both with deep meaning and substance. Fleming began in familiar territory with the lilting Aria from Heitor Villa-Lobos' Bachianas Brasileiras No. 5 (with SF principal cellist Michael Grebanier) before transitioning to "Fable" from Adam Guettel's The Light in the Piazza, which she said was "one of my favorite musicals." Her voice is still a miracle, penetrating and powerful, yet accessible and intimate.

The vocal part of the program ended on a politically-charged note, with McDonald and Fleming singing a medley of Sondheim's "Children Will Listen" from Into the Woods and Richard Rodgers "You've Got to be Carefully Taught" from South Pacific. "Seems appropriate for our times," McDonald said, a not-so-oblique reference to recent events. To drive the point home, they then offered an encore of Laura Nyro's 1969 anti-war rock anthem "Save the Country."

"I got fury in my soul, fury's gonna take me to the glory goal
In my mind I can't study war no more.
Save the people, save the children, save the country now"

MTT, who will be stepping down as San Francisco Symphony music director after next season, has been appointed a Carnegie Perspectives Artist, and will be returning later this season with the Vienna Philharmonic (March 5-6) and his other ensemble, the New World Symphony (May 1-2), who will be performing two of Thomas' own works. As for Carnegie Hall, upcoming highlights include concerts by the Czech Philharmonic (Oct 27-28), the Mariinsky Orchestra (Oct 30-Nov 1), and recitals by pianists Pierre-Laurent Aimard (Oct 25) and Yuja Wang (Oct 26). 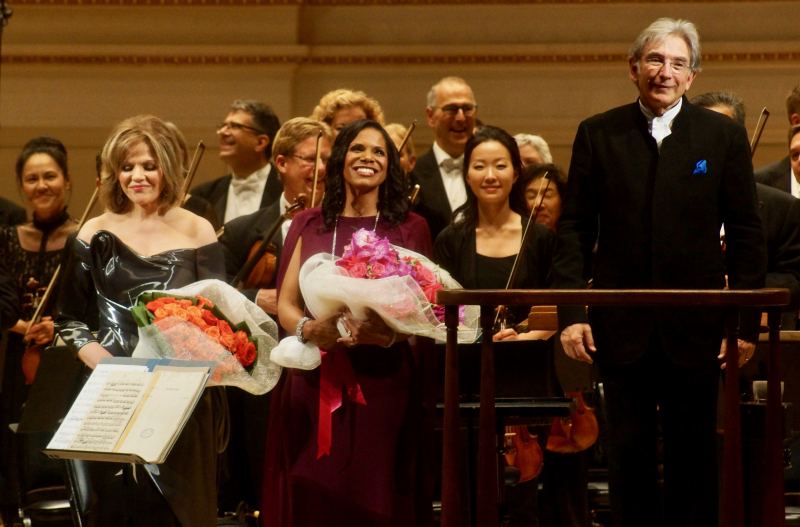 "The Mile Long Opera" on The High Line 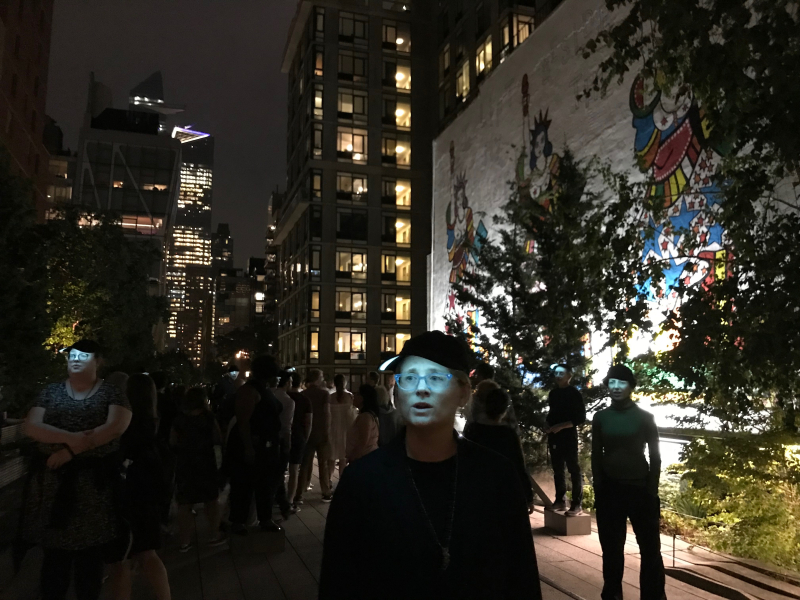 Composer David Lang has never been comfortable with standards of music presentation. Thirty years ago, he - along with Michael Gordon and Julia Wolfe - founded Bang on a Can for the express purpose of upending concert hall conventions. Instead of a neat two hour program with a 15 minute intermission, their Marathons run continuously from six to ten hours. And, Lang's music in particular seems to go our of its way to be subversive: among his recent works is a "symphony for broken instruments" (2017) and "harmony and understanding" (2018) for orchestra and audience.

Four years ago, David decided to eschew the concert hall altogether with "crowd out" (2014), commissioned by the Birmingham Contemporary Music Group and Berlin Philharmonic, and performed outdoors by "1,000 people yelling." He followed that up two years later with "the public domain" (2016), written for 1,000 singers (including your's truly) performing on Lincoln Center Plaza.

Now Lang, along with architect/designer Liz Diller, has come up with his third work for 1,000 performers, "The Mile Long Opera," which is being performed this week along the entire length of The High Line on the west side of Manhattan. (The final performance takes place tonight, starting at 7pm.)

I attended last Thursday's performance, and it is, first and foremost, an impressive feat of logistics and stage design - if you can call the High Line a stage. Some 40 professional and community choirs from around the city have been recruited to participate, comprising a patchwork as diverse as the city itself. There were choirs of Indian, Japanese, Chinese, Ukrainian, and Hispanic descent. There were baptist choirs, new music ensembles, women's choruses. Even Opera on Tap was there.

Continue reading ""The Mile Long Opera" on The High Line" »

A New Organ for New York: The Miller-Scott Organ at St. Thomas Church 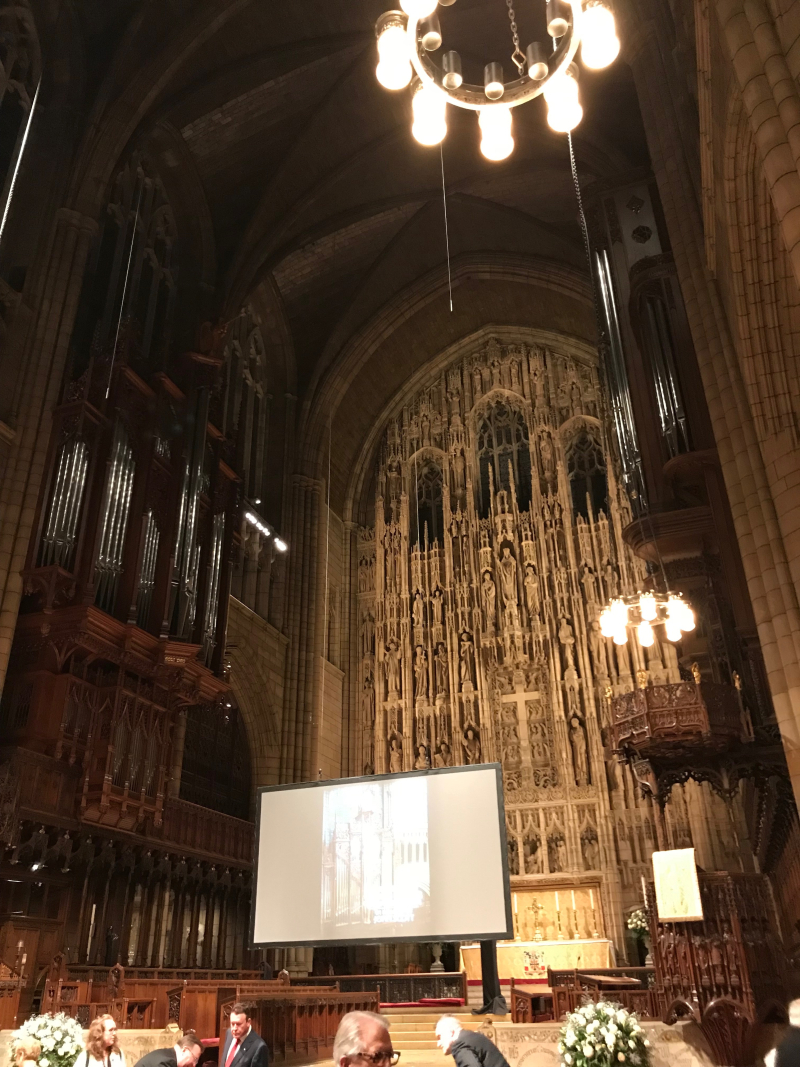 Look around, and you might notice that New York City is living in a golden age of pipe organs. In the past decade, several significant instruments have been either installed or restored around the city, notably at Ascension Church, Alice Tully Hall, St. Paul's Chapel, and soon to come, Trinity Church on Wall Street. Add to that list the new Irene D. and William R. Miller Chancel Organ at St. Thomas Church, which was dedicated this weekend with a recital on Friday evening and a liturgical service on Sunday morning. The massive instrument, built by Iowa's Dobson Organ Company and originally conceived by St. Thomas' Organist and Director of Music John Scott, has been more than a decade in the making and is already regarded as one of the finest instruments in the country.

When Scott arrived at St. Thomas in 2004 after more than 26 years as organist at St. Paul's Cathedral in London, he quickly realized that the existing chancel organ - a heavily modified 1913 Aeolian-Skinner - was in severe disrepair and needed to be replaced. In so doing, Scott wanted an instrument that could perform the full breadth of the organ repertoire: everything from Baroque (Buxtehude, Bach), to Romantic (Franck, Vierne) to Modern (Messiaen, Ligeti, etc.)

More importantly, Scott wanted the organ's sound to penetrate the full length of the nave, in order better accompany parishioners in their singing of hymns. For this, a new case, filled with ornate carvings by woodcarvers Dennis D. Collier and Family, has been added to the north wall of the chancel, facing the original 1913 case on the south wall. In all, the new organ has 7,000 pipes over six divisions and 102 stops, reduced from the previous instrument's 8,905 pipes and 112 stops.