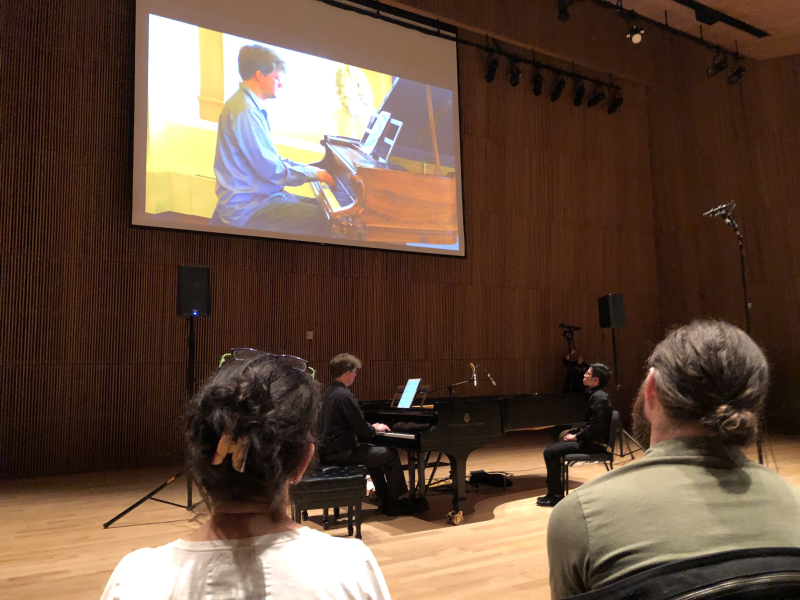 HereNowHear, the dynamic new-music piano duo of Andrew Zhou and Ryan McCullough, closed out Kettle Corn New Music’s sixth season at the DiMenna Center for Classical Music this past weekend. The young performers delighted a youthful and engaged crowd with contemporary classical and experimental works from established composers such as George Crumb, Steven Stucky and Luciano Berio, alongside brand new works from Kettle Corn personnel Emily Cooley and Loren Loiacono. Kettle Corn New Music, founded in 2012 in New York City, curates contemporary classical concerts while fostering an informal listening environment.  The audience helped itself to beer, wine, and a bag of complimentary kettle corn as fresh as the music itself.

Cooley (b. 1990) opened the night’s program with Phoria (2015) for piano 4-hands. Cooley explained that "phoria" is a misalignment of the eyes: an analogy that became clear as Zhou and McCullough’s hands appeared to chase each other down the keyboard during passages that were not quite in alignment. Delicate chime-like chords in the high register gave way to playful melodies and polyrhythmic chord patterns.

Walter Zimmermann (b.1949) closed out the first half of the program with As a Wife Has A Cow: A Love Story, based on a text by Gertrude Stein. Extended techniques abounded as the performers strummed, muted, and tapped on the strings and frame of the piano, creating a wide variety of delightful and sometimes haunting timbres. 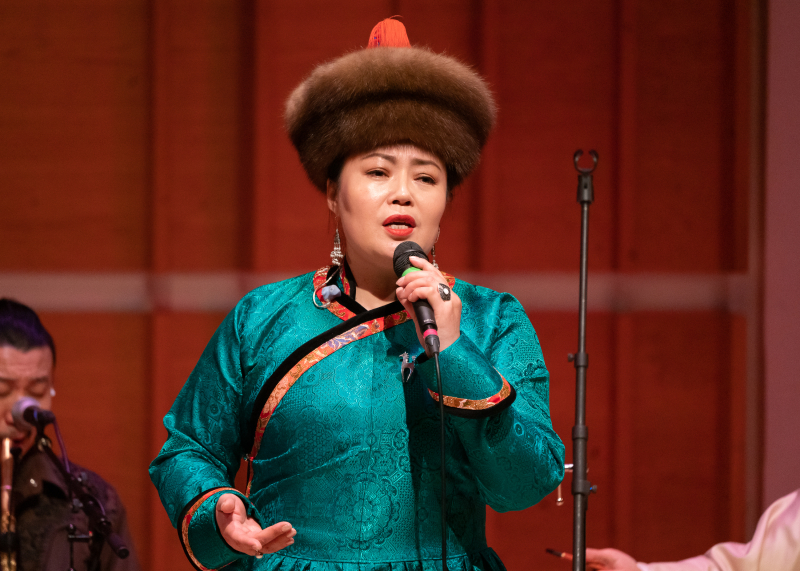 On March 30, the World Music Institute hosted a fascinating concert at Merkin Hall featuring the Mongolian musical group Anda Union, whose nine members represent different nomadic ethnic groups, many from the grasslands of Ar Horchin in Inner Mongolia. Back in the 1200s and 1300s, Genghis Khan and his grandson Kublai Khan established a vast Mongol Empire that included China itself, until the start of the Ming Dynasty when the Mongols were expelled.

Anda Union is comprised of musicians who go by only one name: Nars, Chinggeltu, Saikhannakhaa, Uni, Chinggel, Biligbaatar, Tsetsegmaa, and two named Urgen. They play exotic-looking string instruments and reeds with names such as morin huur, tobshuur, ikil, moadin chor, and tobshuur. Because much of traditional Mongolian culture has been absorbed in the geographical areas that were once part of Mongolia but are now part of China, many younger Mongols have been researching and celebrating their traditional customs, to keep them alive for future generations. In this vein, Anda Union has been blending traditional folk music of the region with modern music written by members of the band. 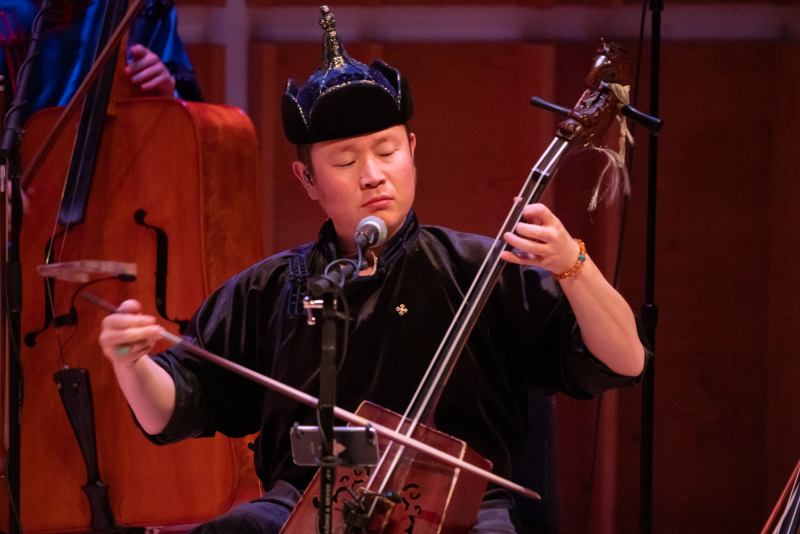 In addition to singing traditionally, Mongolian singers are noted for hoomei, or throat singing, in which the vocalist sings two pitches simultaneously. On most songs the band performed, the seven main musicians sang together as a group, or one or another would take the lead. But on a number of songs, there were two featured singers who brought something special to the performance.

The featured female singer was Tsetsegmaa, who was dressed in a traditional robe of aquamarine silk and a fur hat with a conical top. Whenever she sang, the audience sat in rapt attention, particularly when she sang a song about mothers that was mesmerizing, even not knowing the words she was singing. 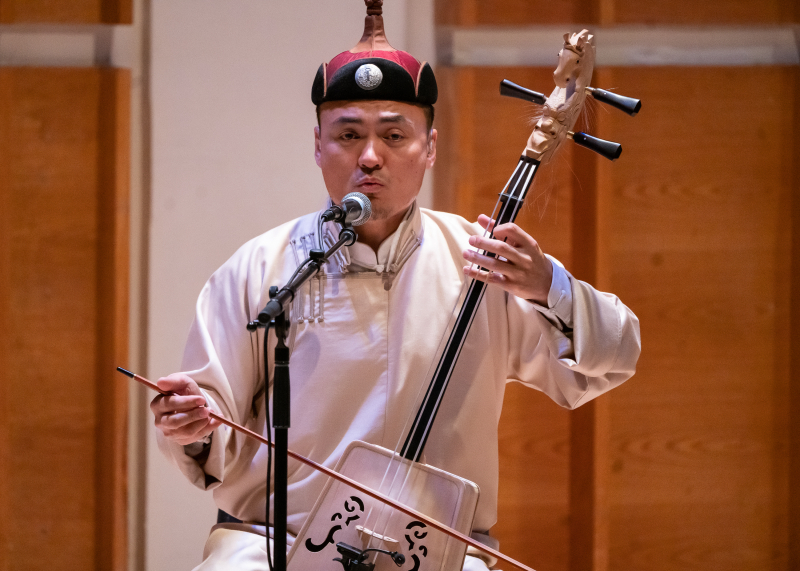 The featured male singer was Biligbaatar, an award-winning long-song singer introduced as a "cowboy," whose rousing performance of "The Herdsman" had the hall rocking. He was dressed in a long blue cloth wrap, and wore a brown cloth hat on his head.

As part of the rousing finale, the band played a high-energy piece that was a tribute to the importance of horses in traditional Mongolian culture, with the musicians capturing the speed of the horses, the thundering hooves, and the high whinnying sounds as they race across the steppe.

The concert was a strong reminder of how different cultures around the world approach what we all experience in life as people, and each culture brings to the table its own unique traditions. The many great shows that the World Music Institute puts on throughout the year in New York are an opportunity to experience these cultures a world away. More photos can be found here.

Janacek's "Diary of One Who Disappeared" at BAM 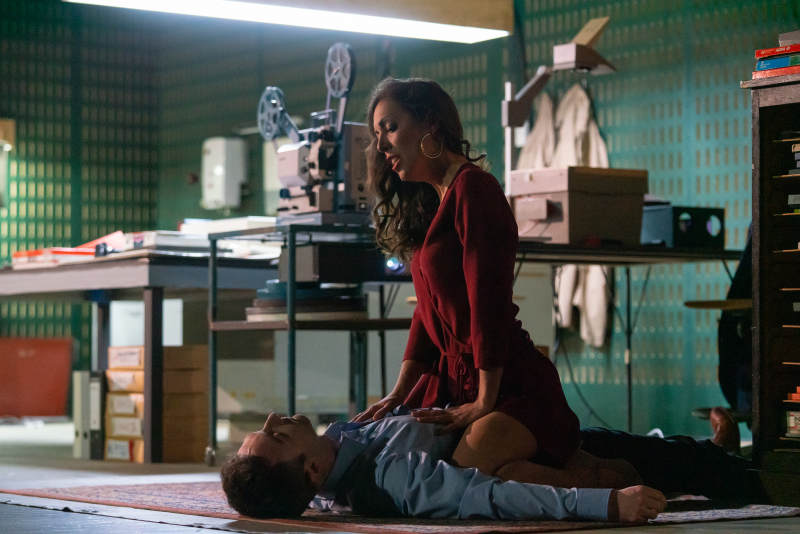 The Czech composer Leoš Janáček (1854-1928) is perhaps best known in this country for his operas Jenufa and The Cunning Little Vixen, though he wrote seven other operas, as well as orchestral, chamber and vocal music. One of Janáček's most striking works is Diary of One Who Disappeared (1919), which arrived at the Brooklyn Academy of Music last week in a production by the Belgian group Musiektheater Transparant, directed by Ivo van Hove.

Van Hove has seemed to be everywhere in recent years. While his principal work has been with International Theater Amsterdam, the largest theater in the Netherlands, he regularly has directed plays both in the UK and New York, winning both the Olivier and Tony Award for directing (for 2015's A View From the Bridge.) Often cited for his minimalist style, he works frequently with his longtime life partner, Jan Versweyveld, who created both the stage and lighting design for this run at BAM.

Diary of One Who Disappeared is a 22-part song cycle written for piano and voices. It was inspired by a series of anonymous poems that appeared early in the twentieth century in a Brno newspaper. The poems told of an all-consuming love that a boy felt for a Gypsy girl, and Janáček soon found a parallel in his own life. In 1917, in his early 60s, Janáček met Kamila Stosslova, a married woman with children who was almost 40 years his junior. Although she was not romantically interested in him, and their interactions with each other were intermittent, Stosslova became Janáček's muse for the prolific last decade of his life. Some 700-plus letters from Janáček to Stosslova survive, in which he repeatedly tells her she was the inspiration for many of the characters in his works. In one letter he wrote: "If the thread that binds me to you were to break, it would also break the thread of my life."

Continue reading "Janacek's "Diary of One Who Disappeared" at BAM" »