Ramy Essam “Tahrir and Beyond” at National Sawdust 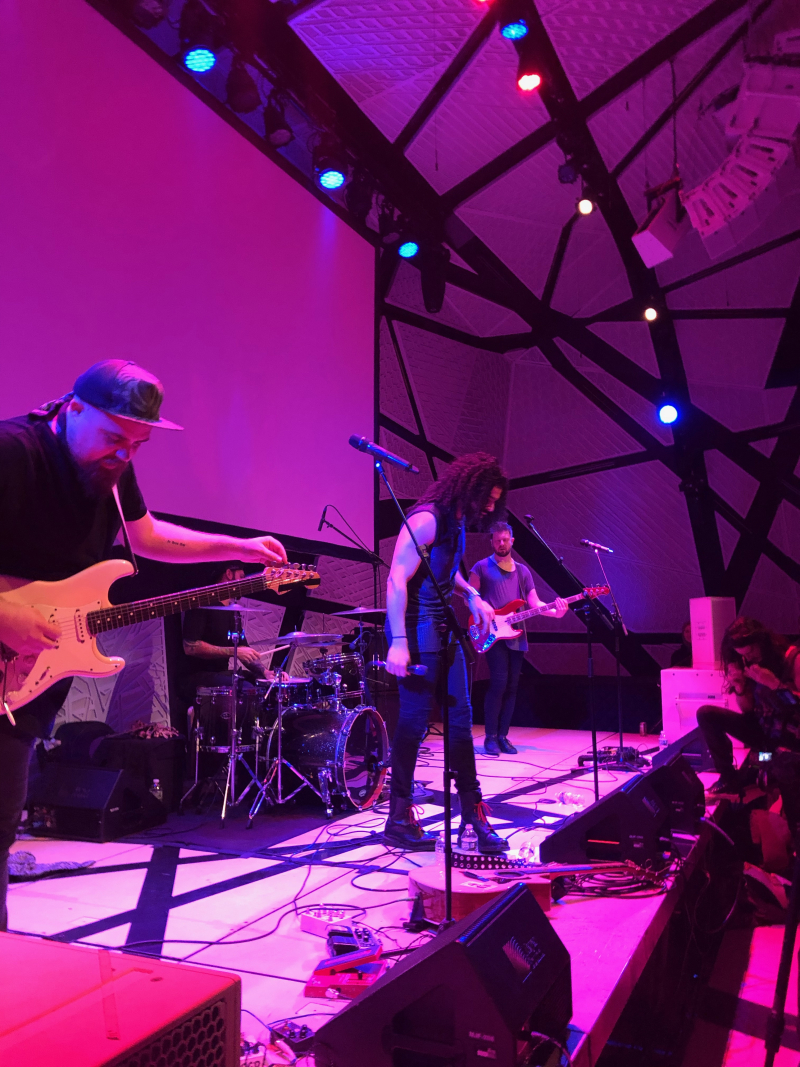 Egyptian singer-songwriter Ramy Essam played an electric show at National Sawdust on January 25th , part of a multimedia tour called “Tahrir and Beyond" commemorating the ninth anniversary of the Egyptian Revolution. Essam was joined by the street artist Ganzeer; both gained notoriety during the 2011 Arab Spring for their musical and artistic interventions in the streets of Cairo. Ramy and Ganzeer now live in exile, but their commitment to justice in Egypt has now risen to global prominence. Case in point: Essam’s song “Irhal” was selected as Time Out’s third most world-changing song of all time.

After Ganzeer presented a slide show of his work and a historical overview of the Revolution, Essam took the stage with a classic four piece rock ensemble. The curly-haired rocker brought his 90’s grunge aesthetic to life with songs that addressed everything from the freeing of political prisoners to celebrating the spirit of the revolution. Despite the ultimate suppression of the uprising between 2011 and 2013, Essam and Ganzeer sought to bring the fervor of that moment in history into the present, refusing to forget the spark of hope they helped to build through their art.

Continue reading "Ramy Essam “Tahrir and Beyond” at National Sawdust" »

Composer Portrait: Caroline Shaw with Attacca Quartet and So Percussion 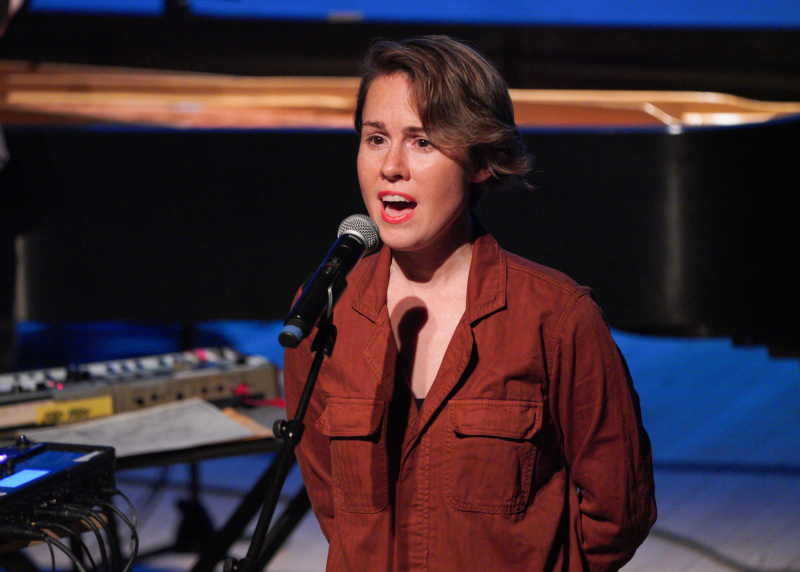 Simply put: What can't Caroline Shaw do? As a violinist, she seems just as much at home playing a Mozart quartet as she does a sweet Southern spiritual. As a vocalist, both solo and as a member of Roomful of Teeth, her clear, pure voice would be just as at home in church as it would be on a pop stage. And, as a composer, she became youngest-ever winner of the Pulitzer Prize for Music in 2013 for Partita for Eight Voices; she added a Grammy to her shelf last year for her album Orange, performed by and with the Attacca Quartet. (Check out this live performance of Orange at the Greene Space last April.)

Now 37 years old (though she seems much younger when you meet her) last week's "Composer Portrait" of Shaw at the Miller Theater seemed perfectly timed as a sort of mid-career retrospective. She seems to be working with everybody these days, from the New York Philharmonic (who has commissioned a piece from her as part of its Project 19 initiative celebrating female composers) to Kanye West. And while that kind of range can sometimes come across as gimmicky, for Shaw it is just an organic part of her all-encompassing musical world, wherein collaboration is an essential part of artistic development.

The Miller program was divided into two parts. The first half of the night was devoted to the Attacca Quartet (Amy Schroeder and Dominic Salerni on violins, Nathan Schram on viola, and Andrew Yee on cello) playing three of her string quartets--"Entr'acte" (2011), "Punctum" (2009/2013), and "Blueprint" (2015). Attacca (pronounced a-tock-a) has a special affinity for Shaw's work, which was fully on display last summer when they performed an all-Shaw program for an uptown Crypt Session.

Faraj Abyad and his Orchestra at Symphony Space 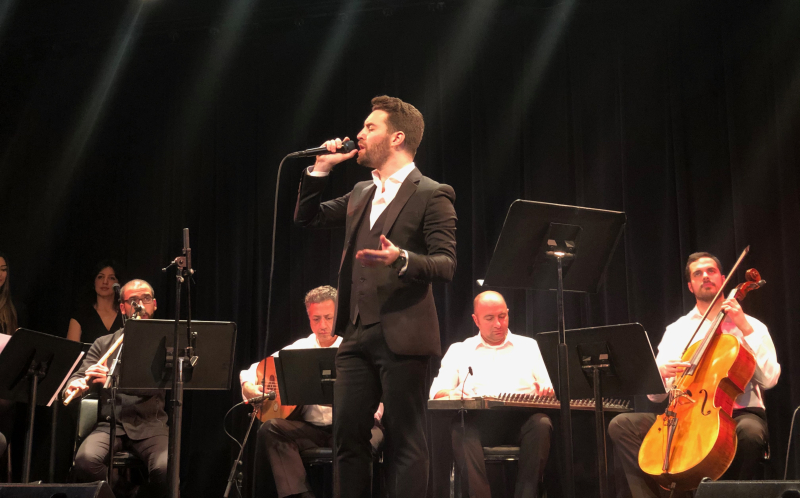 Nothing in the world could have prepared me for the trance and ecstasy that Egyptian singer Faraj Abyad and his Orchestra wrought upon the audience last Saturday at Symphony Space. Presented in collaboration with the World Music Institute, Faraj performed classics from the Golden Age of Arab Music. Directed by the violinist Layth Sidiq, the orchestra was comprised of nine musicians playing a mix of traditional Arab instruments like the Oud, a short-necked lute-type instrument; the Qanun, a stringed instrument; and the Ney, an end-blown flute, as well as more familiar western instruments like the violin, cello, and tambourine.

Tight-suited in black, Faraj performed Tarab songs from Egypt, Syria, and Lebanon. Taraab music, which doesn't directly translate to English, is mostly noted for its extreme sentimentality, full of love and intense longing. One of Tarab's best known exponents, Umm Kalthum, was the most celebrated Egyptian singer of the 20th century. Known as the “Star of the East,” and “The Fourth Pyramid of Egypt,” Kalthum's career spanned two world wars, two revolutions in Egypt, and the social and cultural turmoil of the 1960s; one of her songs “Wallahi Zaman, Ya Silahi” (“It’s Been a Long Time, O Weapon of Mine”) was adopted as the Egyptian National Anthem from 1960 to 1979.

"Enta Omri," an Arabic term of endearment meaning ‘You Are My Life,’ began with gentle plucking by the string section leading into Ney and Quanrun solos, accompanied by the percussive beat of the tambourine. Faraj employed a style of singing known as Mawwal, characterized by prolonged vowels, setting the emotional stakes high.

The audience was ripe to participate, clapping and singing along at the slightest encouragement from Faraj. It probably didn't hurt that the event featured an Arak bar with spins on classic Levantine cocktails, to put everyone in the right frame of mind.

Continue reading "Faraj Abyad and his Orchestra at Symphony Space" »