After consecutive cycles of all of Beethoven's string quartets, followed by all of his symphonies, where does one go? For me, it was back to Carnegie Hall last Thursday to hear the Orchestra of St. Luke's perform an adventurous program of Beethoven's choral and orchestral music, part of Carnegie's ongoing Beethoven 250th birthday celebration. Led by their Principal Conductor  Bernard Labadie, many of these works are rarely heard in concert, for logistical and, well...other reasons. But, they are an essential part of Beethoven's orchestral output, presaging many of his better known masterpieces.

The Leonore Overture No. 2 (1805) was Beethoven's first crack at an overture for his sole opera, Fidelio. Compared to the more famous Leonore No.3 - or No.1, which the Orchestre Révolutionnaire et Romantique performed on Feb. 20 - this one felt  disjointed, taking a bit long to build up to the main theme. It was more of a tone poem than a tight introduction. Still, there were some neat effects, like placing trumpeter Carl Albach in the balcony.

The chamber choir La Chapelle de Québec - also directed by Labadie - joined the OSL for Calm Sea and Prosperous Voyage (1815), a cantata that was completely unknown to me. Completed about a year after the final version of Fidelio, it colorfully sets a pair of nautical poems by Goethe. The first, "Calm Sea", is soothing, almost Brahms-like as the sailors are adrift at sea. Then, things pick up and we segue into "Prosperous Voyage": a swashbuckling shanty with a real Yo-Ho-HO! feel to it. You could almost feel the wind in your hair as Beethoven cheerfully carries us across the water, perched high up on the mast. "Symphonies are the best representation of my true self." - Beethoven

Beethoven's nine symphonies are the foundation of the symphonic repertory, the standard by which all others are measured. His achievement was so brilliant, so daring, it paralyzed composers for decades to come; Brahms was so terrified of comparisons to Beethoven, he didn't finish his First Symphony until he was 43.

Of course, I've heard all of the Beethoven symphonies performed in concert, several multiple times. They are burned into my memory from countless hours of listening to them on vinyl, cassette, CD, and Spotify. Could there be anything left to discover at this point, anything to make them sound fresh and vital?

This past summer, I was driving around the Catskills when Beethoven's 5th came on the radio. I was about to change the dial - ugh, not again - until I realized that this was a performance unlike any I've ever heard. It was visceral, intense, almost hyperreal. I had to pull off of the road so I wouldn't accidentally miss a hairpin turn.

Who was this? The Berlin Phil? Vienna? Imagine my surprise when the announcer said it was the Orchestre Révolutionnaire et Romantique, led by Sir John Eliot Gardiner. I was dumbstruck: the London-based ORR, founded by Gardiner 30 years ago, practice historically informed performance, using outdated, often inferior instruments that were in use at the time this music was written. Honestly, I've never been a big fan: sure, vintage violins are great, but valveless horns? Wooden flutes? Compared to a modern symphony orchestra, period instrument ensembles feel to me like an affectation, stuck in low gear.

"My enthusiasm for period instruments is not antiquarian or in pursuit of some bogus and unattainable authenticity, but simply a refreshing alternative to the standard, monochrome qualities of the symphony orchestra... I just love the sounds they make." 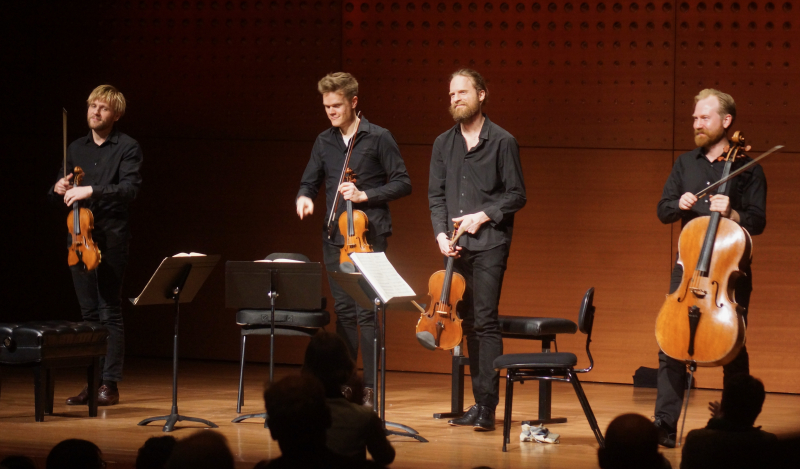 "Oh, they are not for you, but for a later age." - Beethoven

Ludwig van Beethoven is always everywhere. A revolutionary figure not just in music but in western culture, Beethoven's music can be heard multiple times each season in every concert hall, every music festival, every occasion that calls for joyous celebration, or sorrowful solemnity. There is little left to be said about Beethoven that hasn't already been said many times by writers and scholars; there is even less to hear that hasn't already been heard to the point of exhaustion.

But, classical music loves its anniversaries, and with 2020 being the 250th anniversary of Beethoven's birth, his music is even more ubiquitous than usual. Here in New York, Carnegie Hall has dedicated a good chunk of its season to Beethoven, featuring complete cycles of the piano sonatas, concertos, and no less than two symphony cycles (one of which just happened.)

Over at Lincoln Center, there isn't much Beethoven to be heard at the Phil, aside from a performance of the Violin concerto with Joshua Bell (April 1-4). Over at the Met, you'll have to wait until next season to hear Beethoven's sole opera, Fidelio (11/20-12/23), including a performance on his birthday (Dec. 17).

Instead, the heavy lifting seems to have been left to the Chamber Music Society of Lincoln Center, which for the past 50 years has held court at the warm, womb-like Alice Tull Hall, tucked under Juilliard on the corner of Broadway and 65th St. Among the works by Beethoven that can be heard at CMS this season are an early Clarinet Trio, Op. 11, a Violin Sonata, Op. 12, and Beethoven's very first composition, the Piano Trio, Op. 1.

But, no survey of Beethoven's chamber music would be complete without his sixteen string quartets. Taken together, the quartets are a remarkable document of Beethoven's development as a composer: from the six Op. 18 quartets, written while still in his 20's, to the final quartet in F major, Op. 135, finished just a few months before his death in 1827. Even more than the immortal nine symphonies, the quartets are widely considered to be Beethoven's greatest achievement; the late quartets in particular are counted among the greatest string quartets - if not music, period - ever written.