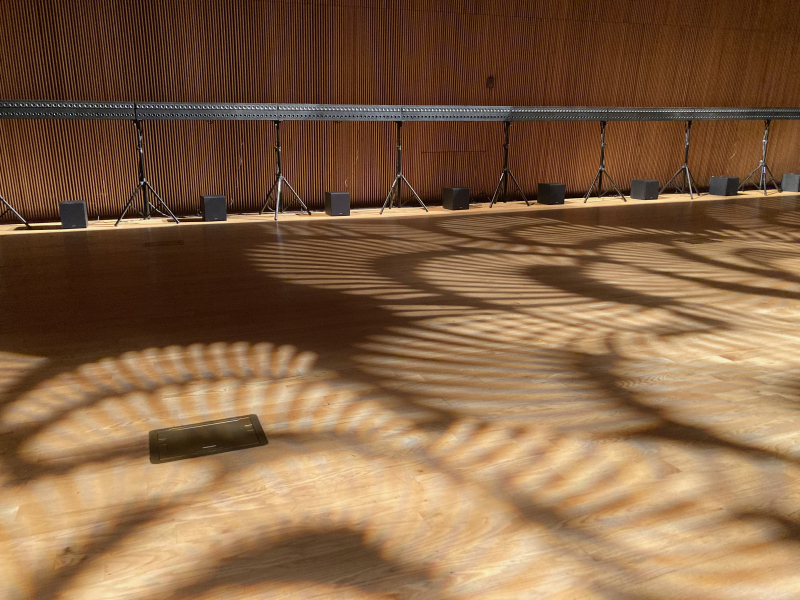 Acoustics are a funny thing. In most concert halls, you hear the instruments in your head in relation to their position on the stage, regardless of where you sit: violins sound as if they come from the left, basses from the right, winds and brass behind. But in some older, curved halls - I'm thinking of Carnegie in particular - there are some seats where a disembodied oboe or flute sounds as if it's coming from the right, or even from behind you. These acoustic quirks (which also appear in Whispering Benches) are generally eliminated now with the help of acoustic engineers, who are paid handsomely to ensure every seat has a clear, balanced sound.

With amplified music, sounds are generally limited by the number of channels in any given loudspeaker array: a stereo system has two channels, a typical home theater system has seven, a movie theater has 10. But, all of these systems project sound in only one direction, meaning you have to position yourself in the absolute center of the room in order to get a "true" surround sound experience. And, even then, the experience is mostly individual sounds bouncing around the room (i.e., Stockhausen's 24 channel work Cosmic Pulses.)

Enter Rensselaer Polytechnic Institute's Experimental Media and Performing Arts Center (EMPAC), which works with a technology called Wave Field Synthesis that claims to have the ability to project sound in real space, much like in an acoustic concert hall. The technology, which was developed at the Delft University of Technology in the late 1980's, has been used in live performance before, but with inconsistent results. EMPAC's innovation is to use a modular array of 558 mini loudspeakers, grouped into 18 modules of 31 speakers each, plus subwoofers. The technology - which involves the manipulation of sonic wave fields -  is too complicated to explain here, but working with software developed at IRCAM in Paris, the EMPAC array enables composers to project high resolution sounds not from a single source, but from different locations around a room.