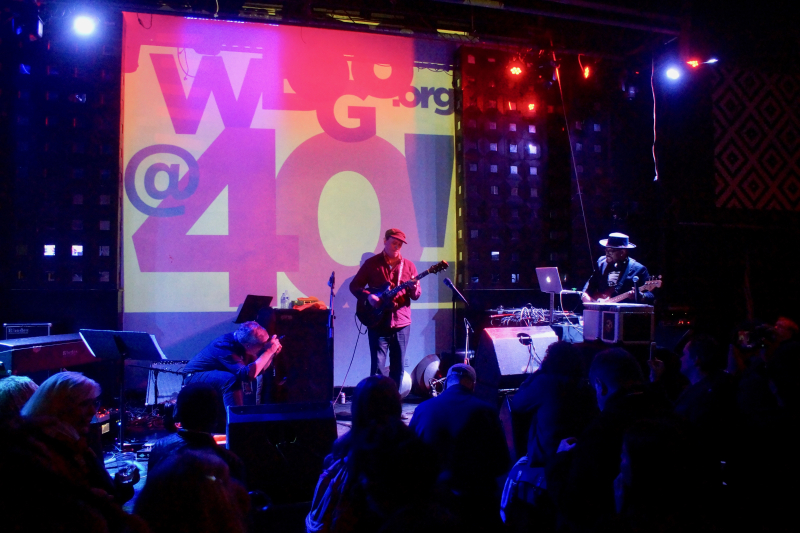 Winter finally reared its adversarial head for last weekend’s Winter Jazzfest, which was incredibly celebrating its 15th year. The bitter cold may have deterred some would-be last minute attendees, but the bulk still huddled in increasingly lengthening lines to hear some of the world’s best and freshest jazz and creative music. The oldest, most platonic form of WJF, the marathon - now taking on an almost literal dimension - had attendees running up-and-across town to catch whatever they could get into.

Friday night kicked off with local jazz radio stalwart WBGO's 40th birthday party at SOB's. After an opening set by up-and-coming singer Alina Engibaryan, guitar virtuoso Kurt Rosenwinkel took the stage with his quartet (Taylor Eigsti on piano, Ugonna Okegwo on bass and Jason Brown on drums.) Rosenwinkel stayed onstage to play alongside "DJ Brother Mister" (aka, Christian McBride), who indulged his fetish for old school funk by spinning records while simultaneously strumming an electric bass. The crowd readily obliged McBride's invitation to get up and dance.

"Don't let me catch you standing there looking at me," McBride shouted. "It's a dance party!" 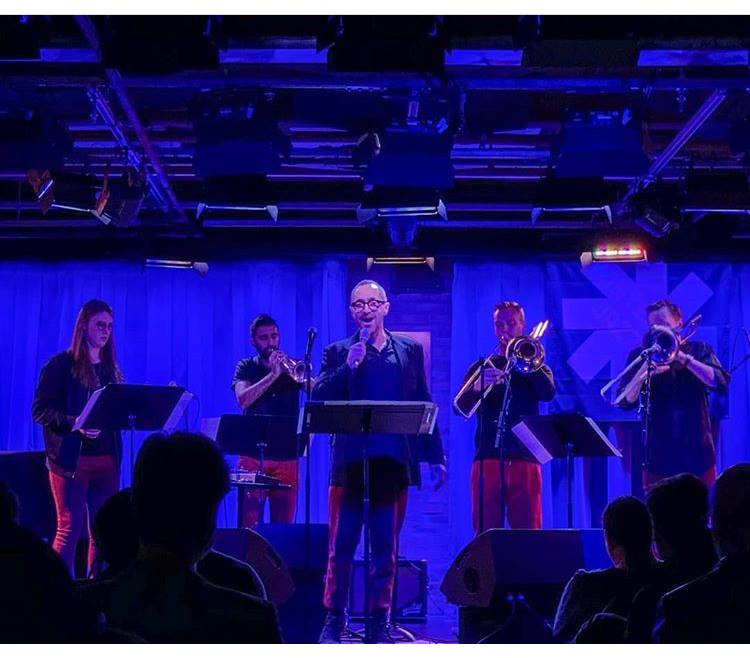 Theo Bleckmann and The Westerlies at SubCulture

Winter Jazzfest’s famous marathon, a two-night musical expedition that lasts eight hours and stretches almost the entire width of Manhattan, had apparently become so popular that a third needed to be added to sate the voracious appetite of New York creative music fans. No less crowded than the full marathon has been - and likely will be when it returns next weekend - fans packed into clubs and performances spaces along Bleecker St hoping to grab a seat, or at least a window between heads, to see new acts and old favorites.

Ghost Train Orchestra’s reputation as a historicist band with modernist proclivities was in full effect during their tribute to one of New York’s most iconic and idiosyncratic composers: Louis Hardin (better known as Moondog). GTO’s episodic tribute to the Viking of Sixth Avenue brought to light the warm, approachable dualities of his Hardin's music: attractive melodies that seemed to belong to no one genre in particular, with themes that were approachable but buoyed by snaky polyrhythms and counterpoints. Horns, strings, vocalists and blocky percussion broke down barriers between indie rock, Native American music and bucolic American classical, with particular stylistic provinces supplied by the exuberant avant-rockisms of guitarist Brandon Seabrook and the probing, history-laden soloing of clarinetist Dennis Lichtman.

Pianist Marta Sanchez’s music was a similar dance between the complex and the simple. Sanchez was both sensitive and spry in her solo development, setting themes into forward motion but darting in delightfully unexpected ways. Her compositions, particularly the way her band performed them, also had the same sort of layered development, with tunes like “Cascadas” wringing all the tricky underlying rhythmic subdivisions of 3/4 time and soloists like Jerome Sabbagh soloing around the melody to let the band envelop him. Much of the material was brought to life in particular by drummer Daniel Dor, milking different rhythmic and stylistic possibilities and squaring the often spiky and complex counterpoint of Sanchez’s music with it’s gentleness. 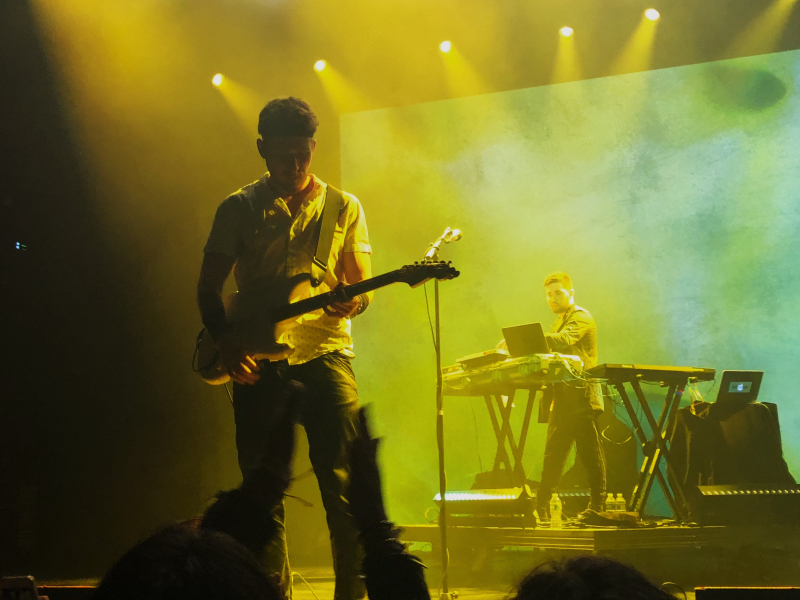 Hailing from Harlem, Two Feet (a.k.a. Zachary William Dess) merges both indie rock and electronic, with a heavy focus on the bass. I had previously seen a short set from Dess at the Governor’s Ball in June, and so was excited to see him headline his own show at Williamsburg’s Brooklyn Steel last Saturday (10/27).

Playing to a crowd dressed in Halloween costumes, Two Feet was joined on stage by Geoffrey Hufford, who played both keyboard and percussion. Dess' set featured songs from his new album A 20 Something F*ck, along with popular singles from his EPs First Steps and Momentum. While most of Dess’ songs place a focus on instrumentals over lyrics, fans still knew every word to every song he played. Mid-show, Dess put his own take on Bill Withers’ “Ain’t No Sunshine”, infusing electro beats into the soulful song.

Compared to his set at Gov Ball, I could see how Dess’ confidence as a performer has grown. He was much more interactive with the audience, and wasn't afraid to move around stage and take risks with his setlist, spontaneously adding in a few tracks that he admitted he had never played live. 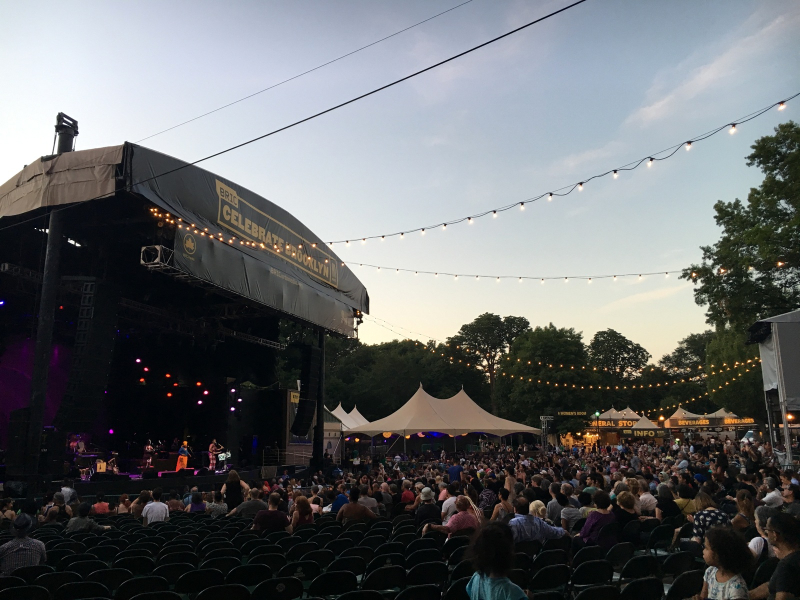 Hard to believe it's already June, and while this year's Gov Ball has already come and gone, the music is just starting to move to the great outdoors. Below is a preview of some of our favorites - check out our Summertime list on the right for updates throughout the summer.

Celebrate Brooklyn: (June 5-August 11) NYC's best outdoor music venue celebrates it's 40th year with another stellar lineup that kicks off with Chicago rapper (and Microsoft shill) Common on 6/5. Other free shows include Aimee Mann (6/21), Branford Marsalis (6/29), Kronos Quartet (7/14), and a stellar closing weekend with Godspeed YOU! Black Emperor (8/10) and The Breeders with Speedy Ortiz (8/11). Benefit shows this year include a killer double bill with Grizzly Bear and Spoon (6/20), The Decemberists with M. Ward (6/13), and Courtney Barnett with Julien Baker and Vagabon (7/25).

Northside Festival (June 7-10): Northside is now a decade old, and the clubs will be jammed across Williamsburg and Bushwick with the latest in cutting edge music, alongside stalwarts such as Caspian, Deerhoof, and Liz Phair. Sunday afternoon brings a Block Party to Bedford Ave, with bands and vendors running all the way to Metropolitan Ave.

NY Philharmonic Concerts in the Parks (June 12-17): What were you doing when you were 11 years old? Well, if you're Jordan Millar and Camryn Cowan, you're having your music played by the New York Philharmonic at this year's parks concerts, courtesy of the Phil's Very Young Composers program. (They also play music by Bernstein, Saint-Saens, and Rimsky-Korsakov.) The Phil visits all five boroughs next week with conductor James Gaffigan; details here.

SummerStage (June 2-September 27): This sprawling series returns with a wide spectrum of music performed in parks across all five boroughs, most of it free. Highlights include a Canada Day celebration headlined by Broken Social Scene (7/1), Afrobeat scion Femi Kuti and Positive Force (7/29), a New Orleans fest with Trombone Shorty, Galactic, and the Preservation Hall Jazz Band and (8/8), and Angelique Kidjo covering The Talking Heads (9/27).

Make Music New York (June 21): Celebrate the longest day of the year with this citywide musical happening, with performances on street corners, plazas and parks from sun-up to sundown.